A survey of college and university presidents conducted earlier this year suggests that campus activists are making a difference. The American Council on Education asked 567 presidents about their experience with and response to activists on campus organized around racial diversity and justice.

Almost half (47%) of presidents at 4-year institutions said that such activism was occurring on their campuses and that the dialogue about such matters had increased (41%). The majority (86%) had met with student organizers more than once and more than half (55%) said that the “racial climate” on campus was more of a priority  than it had been just a few years ago. The trends for 2-year institutions were weaker, but in the same direction.

When asked what concrete steps they had taken to improve the racial climate, presidents reported a range of strategies: 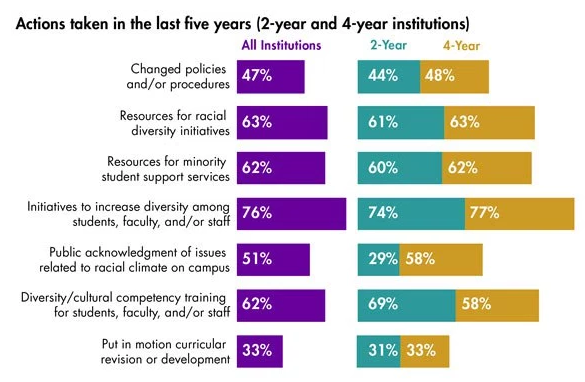 As with all activism, progress requires vigilance, so it will be interesting to see how many of these efforts translate into real changes in climate. New policies and procedures can be toothless or even harmful, resources can be mis-spent and trainings can be terrible, public acknowledgement can be nothing but lip service, and curricular revision can die in committee. Still, these data point to the potential for activism to make a difference and are encouraging for those of us who care about this issue.

Politics of any kind in the education institues will destroy the education system completely , Get a wikipedia page service for you if you have something special to share to the world

College rankings have been an important decision for the global institutes to make for the ranking of the colleges. The Paperwritingpro provide many services to the students and educational professionals. What is the role of the college in ranking system for the first position so that all students could be given proper attention?

I try to read all the available information about this, as well as the experience of people who have been doing this for a long time.

The Community-Driven Education is the best to help us and provide great results. The Project Ownership Where it Belongs is amazing and I like that you shared this post for us to know about these ideas. Also from https://www.certsboard.com/ I realize that it is more helpful for us.