February’s edition of Contexts had a fascinating article by Amin Ghaziani titled Lesbian Geographies. Most of us are familiar with the idea of a “gayborhood,” a neighborhood enclave that attracts gay men. It turns out that lesbians have enclaves, too, but they’re not always the same ones.

Here’s the frequency of same-sex female couples (top) and same-sex male couples (bottom) in U.S. counties. Census data tracks same-sex couples but not individuals, so the conclusions here are based on couples. 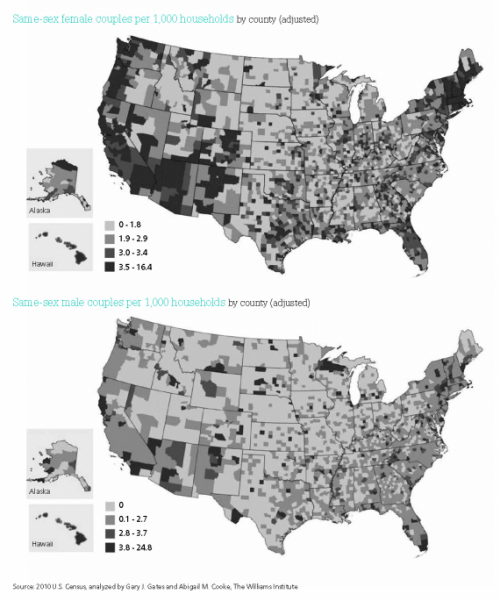 What are the differences between where same-sex female and same-sex male couples live?

First, Same-sex female couples are more likely than their male counterparts to live in rural areas. Ghaziani thinks that “cultural cues regarding masculinity and femininity play a part.” As one interviewee told sociologist Emily Kazyak:

If you’re a flaming gay queen, they’re like, “Oh, you’re a freak, I’m scared of you.” But if you’re a really butch woman and you’re working at a factory, I think [living in the midwest is] a little easier.

If being “butch” is normative for people living in rural environments, lesbians who perform masculinity might fit in better than gay men who don’t.

Second, non-heterosexual women are about three times as likely as non-heterosexual men to be raising a child under 18. Whatever a person’s sexual orientation, parents are more likely to be looking for good schools, safe neighborhoods, and non-postage stamp-sized apartments.

Finally, there’s evidence that gay men price lesbians out. Gay men are notorious for gentrifying neighborhoods, but data shows that lesbians usually get there first. When non-heterosexual men arrive, they accelerate the gentrification, often making it less possible for non-heterosexual women to afford to stay. Thanks to the gender pay gap, times two, women living with women don’t generally make as much money as men living with men.

Or, they might leave because they don’t want to be around so many men. Ghaziani writes:

Gay men are still men, after all, and they are not exempt from the sexism that saturates our society. In reflecting on her experiences in the gay village of Manchester, England, one lesbian described gay men as “quite intimidating. They’re not very welcoming towards women.”

OK I'm just going to ignore the dodgy math in that "times two" bit and focus on the fact that recent studies in the US, Europe, and Australia have all found that the gender pay gap is actually reversed among gays and lesbians. That is, gay men earn on average 13% less than hetero men, and lesbians earn about the same amount more than hetero women. (Trans people of all sexes and orientations experience a more extreme pay gap). Despite the appearance of affluence in some of the more famous urban gayborhoods, LGBT people - particularly nonwhite LGBT people - are likelier to live below the poverty line than heterosexuals. In portraying gay men as the drivers of gentrification, pricing lesbians and other groups out of their turf, you're reinforcing a narrative largely shaped by homophobia that doesn't line up very well with the facts.

And the same old sexism combined with a lack of sexual interest in the opposite gender also explain segregation between gay men and women. Indeed, getting gender equality is often a problem in gay social spaces, because too much of one gender can trigger flight of another.

Tangential to the income issue, do gay and lesbian married couples automatically treat financial assets as joint like most heterosexual couples do? I'm wondering where this plays out when net worth is considered; W2s is one thing, wealth another.

Nice article. As an economist, I would put the location issue this way. Gay men consume less housing space so they live in high housing cost areas. Gay females consume more space, particularly due to children, and also they may have lower income so housing space is a larger fraction of their budget, so they are attracted by low housing cost locations.
In judging pay gaps, it is important to differentiate married men and women. Married men make more than anyone else and married women make less than other groups. The reason is that married women sacrifice career to promote their husbands and perhaps women pick the highest earning men to marry. Single men and women make about the same (adjusted for age, education, location, etc) I don't know of any studies of pay gaps that separate gay and straight single men and women. Perhaps that is a further research idea for the author.

On the quote from a woman who found gay men "intimidating": you could walk into any gay bar on earth and find at least a few men who say the same thing about lesbians. But when lesbians are the victims of harrassment and violence, how often are the perpretrators gay men?

This article is laughable and makes me seriously wuestion the standards of publication for this site. Sweeping generalizations, cliched stereotypes, and unsubstantiated opinions are offered as fact and display clear disregard for gay men. Gay men are described as "notorious", not "butch" enough for the Midwest, sexist, and so outside the (heterosexist) norm that they would choose small apartments over children.

Dr. Wade needs to check her bias and should be embarrassed for putting her name on this garbage.

You forgot that gays males can be misogynist too. They can be quite cruel. All men exercise their power dynamic over women.

I’m so grateful for the housewarming gift you sent, our place is one step closer to feeling like home because of it. kaş laminasyonu

We’ve discovered the best road bikes under $200 for everyone: those on a budget and beginners and experienced cyclists. In order to select these bikes, we focused on the number of gears, frame materials, shock-absorbing qualities, and overall comfort and performance.