Who really runs the Airbnbs?

When you travel, the option to stay in a private home instead of a hotel might seem like a nice idea. Your experience of the city might be a little more authentic, maybe you’ll meet a local, and you can keep your money out of the hands of giant corporations. It’s a tiny way to fight the shrinking of the middle class.

These options, though, may not be a panacea. After discovering that his Brooklyn neighborhood had 1,500 listings on Airbnb, Murray Cox decided to take a closer look. How many residences now invite tourists? How small scale were the profits? Did the money really go to locals?

New Orleans wanted to know the answers to these questions, too. The city has been hit by what nola.com reporter Robert McClendon calls a “Airbnb gold rush.” It turns out the city currently has about 2,600 rentals on Airbnb, plus another 1,000 or so on VRBO.com. This has sparked a heated debate among residents, business owners, and politicians about the future of the practice.

So, Cox jumped in to give us the data and figure out where the money is going. 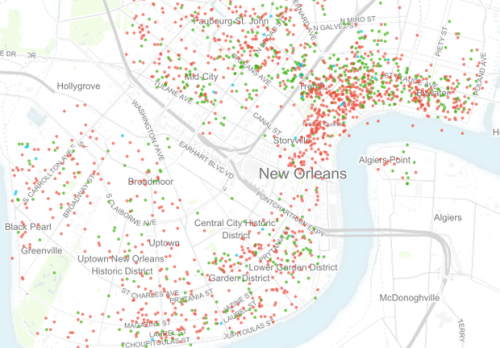 Are Airbnb hosts living in the spaces they rent?

Cox found that they generally are not. Only 34% of rentals are for rooms or shared rooms; 66% of listings are for an entire home or apartment. More than two-thirds (69%) are rented year-round. Almost half of all hosts operate at least two rentals.

These numbers suggest that your modal Airbnb host doesn’t live in the home they rent out. Some may actually live in another city altogether. Others are using Airbnb as an investment opportunity, buying homes and turning them into full time rentals.

Locals are complaining about deterioration in the feeling of community in their neighborhoods. It’s difficult to make friends with your neighbors when they turn over twice a week. Tourists are also more likely than locals to come home drunk and disorderly, disturbing the peace and quiet.

And they are pricing people who actually live in New Orleans out of the rental market. Short-term renting offers owners the opportunity to make four or five times the amount of money they could make with a long-term tenant, so it’s an economic no-brainer to sign up for Airbnb. But, as more and more people do so, there are fewer and fewer places for locals to live and so the supply-and-demand curve increasingly favors owners who can jack up long-term rental prices.

So, when you give your money to an Airbnb host in New Orleans or elsewhere, you might be giving some extra money to a local, but you might also be harming the residential neighborhoods you enjoy and the long-term viability of local life.

I always struggle with using AirBnB for this very reason, but the truth is people have rented out properties that might otherwise be homes for a long time, way before AirBnB or even the web came along. I know plenty of people would rather there were no tourists in my own home town of Edinburgh, but at the same time it would hardly be fair for me to revel in how wonderful my city is without expecting someone to be interested enough to come take a look for themselves eventually. And I certainly can't pretend that the economy of this city doesn't rely on tourism to a truly enormous extent.

Tourists can indeed be obnoxious and careless, but so can every other group we might paint with overly broad brushes: Helicopter parents, local government employees, students, architects, NIMBYs, overly-proud locals who somehow think their city is just for them and no-one else gets to come see it... you name it. I wonder if the fundamental idea of AirBnB might possibly even help break down the barriers between tourists and locals just a little. There’s a removal of responsibility that comes with staying in a hotel which is set up to look after you so completely, and I would hope that with AirBnB some of that responsibility is placed back in the hands of visitors. I think there’s also a degree to which AirBnB, for the sake of their own branding, needs to encourage that engagement, not just hope that it will be there. It would certainly be a great loss if AirBnB DID end up just like any other BnB listings site.

The basis of this article focusses a lot on the property-owning users of AirBnB, but I’d also be fascinated to know what the visiting users of AirBnB are like, not so much in comparison with locals in the places where they’re staying, but in comparison with other visitors who would NOT use the service. What kind of places to they visit while there? How much do they spend? Where do they spend it? Why were they interested in visiting in the first place? How much do they talk to people? No idea how such a study might be done, of course, but I WOULD be interested.

We visited New Orleans for the first time this June, and sure enough, we stayed in an AirBnB property, up on the NE edge (or downtown lakeside edge, if I understand things correctly) of Tremé. The owners definitely DID live in the same house, and the entire reason we wanted to stay there was because they were in the middle of restoring their traditional Creole Cottage, and they clearly had an interest in sharing their love of the place with any visitors who were interested themselves (I’m an architect and my wife’s an architectural historian, so count us amongst such folk!) They looked after stray animals in their neighbourhood, they pointed us towards local businesses, they introduced us to people: honestly, they were exactly the kind of people you’d hope might be using a service like AirBnB and I look forward to catching up with them the next time we visit New Orleans.

I suspect most AirBnBs aren't quite as great, but I hope that they aren't ALL bad.

I used to work in an AirBnB call center. You couldn't pay me to stay in one after that.

On a recent trip to Detroit, I attempted to use Airbnb to find temporary housing. I wanted to support local black business and stay at a black owned residence. As Detroit is a majority black city, one would think that it would be easy to drive money in a non-gentrifying way to black local business. Unfortunately, I found almost zero black owned listings in a city that is 83% black, and almost all listings were white and wealthy.

Similarly, a cursory search for New Orleans reveals similar racial patterns for a city that is 60% black.

Where I live in San Francisco, Airbnb has caused a hyper gentrification of the Mission, driving latino evictions and causing a massive rent spike throughout the city.

I really wonder if there is something about these short term rental sites which are driving some sort of new cyber-redlining in all American cities.

I believe this, but I'm not sure what the option is. They would seem to be:
1) Don't travel
2) Stay at a hotel
Are either of these really better?

Not to mention that the houses bought for AirBnB could have been owned homes as well. Just one of the many problems on an unregulated housing market.

Sidebar, I don't see the lure of AirBnB as a traveller either. Unpredictable living conditions is a major pain in the ass when you're travelling, so why use something as shaky as AirBnB if you can afford a reliable hotel chain?

This is not about Airbnb. This is about new economy and it is a global issue. The way people make business, sell goods and services or simply provide / search a benefit, be it for profit or pro-bono is transforming fundamentally. Ok, we're all aware of the societal change, technology and all that since at least for three generations. Although we were warned about the speed of the change since 70's, the exponential acceleration did not allow the communities to address many of the issues which are left behind unsolved. Urban planning, taxing, citizen and consumer rights, fair competition, etc etc… Otherwise, home exchange, subletting a room of your home, seasonal rentals, etc. all of this existed well before the invention of the internet. Now it has become massive… The core of the home rentals used to serve a special segment of travelers who dislike mass tourism, avoid anonymous hotels, plan their travels individually and enjoy the local culture. I'm one of them. It's a choice of life style before anything. In a democratic society, theoretically, no one is supposed to restrict your travel and rental choices. Now is the time to debate all implications and find local or national or international solutions for the benefit of all parties.

I have used Air BNB in Dublin Ireland, Milwaukee WI, and Stratford Ontario Canada. All three hosts were charming and helpful, and living on site. In Ireland and Milwaukee we also experienced friendly, helpful neighbors. There may be abuses in some locations, but that has not been our experience. All our hosts were using Air BNB to supplement their income in order to renovate or improve their properties. We were glad to be part of that, rather than giving our money to some impersonal corporation like Best Western that underplays its maids.

So, in conclusion around 35% of people who list on AirBnb do not live in their property and this is destroying the fabric of society. Your justification is that ALL tourists are bad for ALL society.

This article fails to address any of the benefits that tourism brings and how AirBnb does keep the financial and societal benefits of tourism local. Its a stupid article, written to confirm the anti AirBnb argument.

Short term rentals have been around along time. AirBnb and others have let the genie out of the bottle and it isn't going back in. There need to be sensible solutions to this, not badly written one sided arguments like this codswallop!

Homes that are purely for rental is nothing new. The practice predates AirBnB. The article mentions a "gold rush" and a few numbers, but does not back up the claim with historical comparisons. The article is basically a report of other people's opinions. It says "Locals are complaining." How many? Two or more is all we can presume. Furthermore, AirBnB is not the only online way to list a rental. Near where I live, in Charleston SC, towns such as Folly Beach have a high number of rentals. These do not "ruin" the area, but bring a lot of money into it.

The effects of overall communal deterioration are no different than that of nomads and gypsies from back in the day. Though this is the new individualist capitalism, meeting the demands of the penny pinchers with no allegiance or respect for the community. I wouldn't blame airbnb though. This is a natural occurrence in capitalism. The same phenomenon is seen in up-and-coming neighborhoods with no airbnb necessary. People invest in real estate and rent to multiple students who disrupt the community.

Airbnb shouldn't be a scapegoat for a pre-existing phenomenon. It accommodates many people who otherwise wouldn't be able to afford a vacation or a temp lease. The fact that they're talking about outlawing something that takes business away from corporate hotels ignites my cynicism and skepticism also.