Powerful people are sensitive to injustice, but mostly when they are its victims

Compared to the less powerful, more powerful people feel more entitled to be treated fairly, are quicker to identify an instance in which they are mistreated, and more likely to take action in response.

These are the findings of a new study by social psychologist Takuya Sawaoka and colleagues. They defined power as “disproportionate control over other people’s individuals’ outcomes.” I imagine someone who is a boss, perhaps, or a police officer, professor in a classroom, or patriarch of a family, or even just people who are wealthy and can pretty much pay people to do anything they want.

The scholars review the literature showing that people with power are entitled to a disproportionate share of resources and more likely to cheat, steal, and lie. They hypothesize that this “individual variability in entitlement shapes people’s reactions to injustices that they experience” and designed a series of studies to test it.

They then tested individuals’ sensitivity to unfairness. They showed people primed to feel powerful and powerless distributions of tokens that looked liked this, but with varying amounts, and asked them to indicate whether the distribution was fair or unfair. 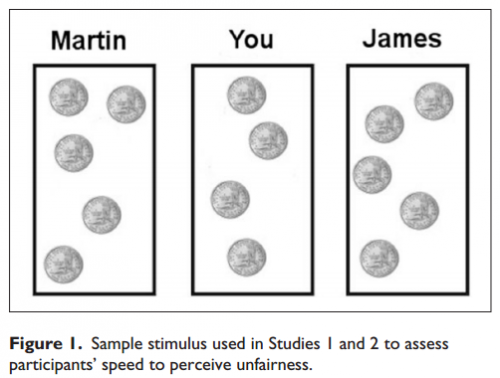 Their measure of sensitivity was how quickly the person identified the distribution as unfair. Their findings showed that, when they were the victim of unfairness (see the second pair of columns from the left), people feeling powerful were quicker to identify it as unfair (a lower bar = faster) than were people feeling powerless.

But, when they benefited from unfairness (see the pair of columns on the far right), people feeling powerful were slower to identify it as unfair than when they were the victims and slower than people who felt powerless. 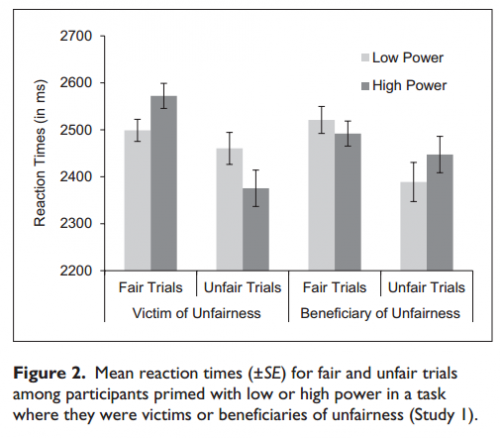 They had similar findings when people primed to feel powerful didn’t directly benefit, but simply observed other people being treated unfairly. And, they tested whether their findings extended to interpersonal justice, too, by asking how people responded to being socially excluded. They found the same pattern. 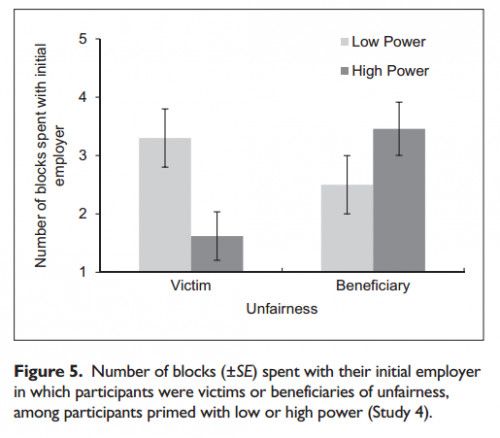 So, to conclude, people who are primed to feel powerful feel entitled to fair treatment — both economically and socially — and are quick to recognize and correct it when they are treated unfairly, but they are significantly less likely to notice or care when the less powerful are injustice’s victims.

Milgram and Zimbardo, whose works were shocking but not surprising 55+- years ago, would agree...

Bruh, I just wanted to fix my controller sensitivity in the Injustice game on Steam.

[…] It also gets to me how many men just straight up don’t give a shit about anything that happens… If anyone is being hypocritical, it’s the people who do this. Whenever I see arguments like this against feminists whenever boys or men start to suffer from the same problems we’ve been fighting for ages, I liken it to watching two villages struggling in a bad storm. One is against the shoreline and it’s been bracing itself against an unrelenting tsunami while the other village, which is situated safely behind it, is starting to flood from a few leaky pipes they could easily fix and even caused to leak. Then the second village, who has overwhelming taken the stance to stand back and watch, ignore, and sometimes even sabotage the first villages attempts to save itself, says to the first “Why aren’t you here helping me?! Can’t you see I’m up to my ankles in water?! It’s getting deeper! You hypocrites! You complain about flooding but you aren’t helping US!”  If the second would have helped and cared to begin with there would be less of a struggle for all and maybe their village wouldn’t have started flooding too. Dudes, if you’re ever talking about gender issues and you feel like you’re being blown off, it’s not that we don’t believe or that we don’t care. We do. But think of the villages. How would YOU react if you were the one pushing back against the tsunami and someone with water up to their ankles is complaining about it and expecting you to rush to their aid?  Now imagine what that’s like when they actively want your village to flood or they deny yours is flooding, but they still expect you to help them in their ankle-deep water. It’s hard to be sympathetic sometimes.  […]

Powerful People Are Sensitive to Injustice But Mostly When They Are Its Victims | Adios Barbie — August 3, 2016

[…] disproportionately angry ways because when powerful groups feel the tiniest bit of discrimination, they blow it up to be the worst thing ever.  They do this because it gives them the chance to deflect criticisms directed towards them, it […]