Don Draper and the pursuit of loneliness

Mr. Draper, I don’t know what it is you really believe in but I do know what it feels like to be out of place, to be disconnected, to see the whole world laid out in front of you the way other people live it. There’s something about you that tells me you know it too.

The ending of Mad Men was brilliant. It was like a good mystery novel: once you know the solution – Don Draper creating one of the greatest ads in Madison Avenue history – you see that the clues were there all along.  You just didn’t realize what was important and what wasn’t. Neither did the characters. This was a game played between Matt Weiner and the audience.

The ending, like the entire series, was also a sociological commentary on American culture. Or rather, it was an illustration of such a commentary. The particular sociological commentary I have in mind is Philip Slater’sPursuit of Loneliness, published in 1970, the same year that this episode takes place. It’s almost as if Slater had Don Draper in mind when he wrote the book, or as if Matt Weiner had the book in mind when he wrote this episode.

In the first chapter, “I Only Work Here,” Slater outlines “three human desires that are deeply and uniquely frustrated by American culture”:

(1) the desire for community – the wish to live in trust, cooperation, and friendship with those around one.

(2) the desire for engagement – the wish to come to grips directly with one’s social and physical environment.

(3) the desire for dependence – the wish to share responsibility for the control of one’s impulses and the direction of one’s life.

The fundamental principle that gives rise to these frustrations is, of course, individualism.

Individualism is rooted in the attempt to deny the reality of human interdependence. One of the major goals of technology in America is to “free” us from the necessity of relating to, submitting to, depending upon, or controlling other people. Unfortunately, the more we have succeeded in doing this, the more we have felt disconnected, bored, lonely, unprotected, unnecessary, and unsafe.

Most of those adjectives could apply to Don Draper at this point. In earlier episodes, we have seen Don, without explanation, walk out of an important meeting at work and, like other American heroes, light out for the territory, albeit in a new Cadillac. He is estranged from his family. He is searching for something – at first a woman, who turns out to be unattainable, and then for… he doesn’t really know what. He winds up at Esalen, where revelation comes from an unlikely source, a nebbishy man named Leonard. In a group session, Leonard says:

I’ve never been interesting to anybody. I, um –  I work in an office. People walk right by me. I know they don’t see me. And I go home and I watch my wife and my kids. They don’t look up when I sit down…

People are silent, but Don gets up, slowly moves towards Leonard and tearfully, silently, embraces him. 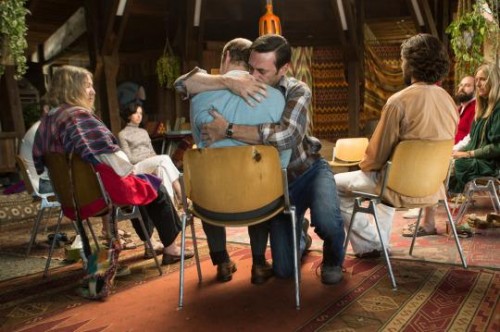 On the surface, the two men could not be more different. Don is interesting. And successful. People notice him. But he shares Leonard’s sense that his pursuit – of a new identity, of career success, of unattainable women – has left him feeling inauthentic, disconnected, and alone. “I’ve messed everything up,” he tells his sometime co-worker Peggy in a phone conversation. “I’m not the man you think I am.”

The next time we see him, he is watching from a distance as people do tai-chi on a hilltop. 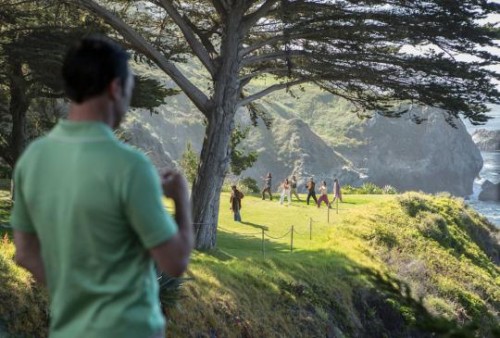 And then he himself is sitting on a hilltop, chanting “om” in unison with a group of people. At last he is sharing something with others rather than searching for ego gratifications. 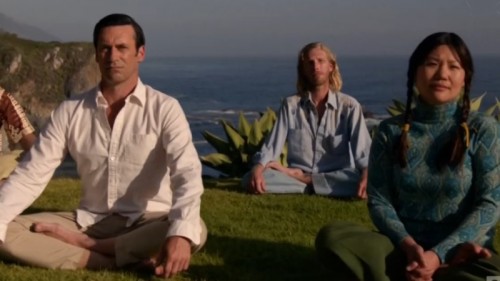 And then the punch line. We cut to the Coke hilltop ad with its steadily expanding group of happy people singing in perfect harmony. 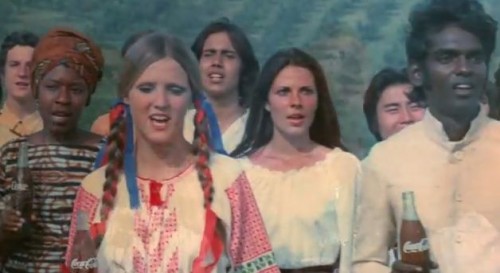 A simple product brings universal community (“I’d like to buy the world a Coke and keep it company”). It also brings authenticity. “It’s the real thing.” Esalen and Coca-Cola. Both are offering solutions to the frustrated needs Slater identifies. But both solutions suffer from the same flaw – they are personal rather than social. A few days of spiritual healing and hot springs brings nor more social change than does a bottle of sugar water.It’s not that real change is impossible, Slater says, and in the final chapter of the book, he hopes that the strands in the fabric of American culture can be rewoven.  But optimism is difficult.

So many healthy new growths in our society are at some point blocked by the overwhelming force and rigidity of economic inequality… There’s a… ceiling of concentrated economic power that holds us back, frustrates change, locks in flexibility.

The Mad Men finale makes the same point, though with greater irony (the episode title is “Person to Person”). When we see the Coke mountaintop ad, we realize that Don Draper has bundled up his Esalen epiphany, brought it back to a huge ad agency in New York, and turned it into a commercial for one of the largest corporations in the world.

I find this interpretation pretty flawless, thanks.

Don is able to take his gut wrenching epiphany--that's he consistently and singlehandedly destroys the really important relationships in his life, and the spark of realization at Esalen that there is indeed a way forward--to find himself. In the last analysis, he's an ad man. That's his bliss.

The ending is perfect. The choir of "Ohmm"s from that hilltop at Esalen morphs on Don's big smile into "I'd like to teach the world to sing in perfect harmony" from the hilltop in Italy for the new Draper Coke ad. Don arises again, the ultimate survivor, a Phoenix for the ages!

Yes, the Mad Men finale is interesting, and the Coke Ad ending can be seen as sarcastic/ironic, so calling it a punch line is spot on. However, what really interested me in this post was the notion that individualism is a root problem. I have not seen it that way, but the argument is intriguing. Nonetheless, I think its probably more complex than just individualism. I think individualism ultimately only really creates the problems described by Slater when it is decoupled from spiritual traditions. I say spiritual "traditions" because most people suppress their spiritual needs, and in their place substitute religious ceremony.

So...what I'm really saying is that individualism without "religion" is what seems most problematic in the way described above. I suspect the diminution of religion opens the door to stepping away from community. I know...religion is far from perfect and it has a tragic history of being used to unjustly set some people apart. However, it also has the power to bring people together even in a society that values individuality. (In the Christian religion, for example, the Lord's Prayer is believed to only have its true power when delivered by a collective asking the Lord to "give us..." not to "give me....")

The way I have always viewed American individuality is in the sense that we must individually take responsibility for our actions, not that we can do anything we want to please our individual egos. But then I grew up in a family that, while not particularly religious, practiced religion and valued the sense of community and moral lessons it imparted. As we move further into the the age of individualized electronically delivered entertainment and religion continues its trend of diminution, I would think the problems Slater observed may become chronic and may even become more broadly pathological.

For the author: Any other good writings on Don Draper's character? Arguably extensive writings?

Caitlyn Jenner--the embodiment of self-determinism. Her ability to express herself is a product of of individualism.