Would Santa give you cancer? Not according to R. J. Reynolds, British American Tobacco, Philip and Morris, and other tobacco companies. They regularly used the jolly cultural icon to advertise cigarettes and other products during the early to mid-20th century.

Print advertisements of the time often featured Santa savoring a smoke, presumably after a long night of delivering gifts. Such imagery suggests that he had earned the indulgence, and that consumers had too. For example, a 1920 advertisement for Murad Cigarettes shows Santa leaning against a chimney smoking, with the caption, “What could you Enjoy more this Xmas than MURAD?” 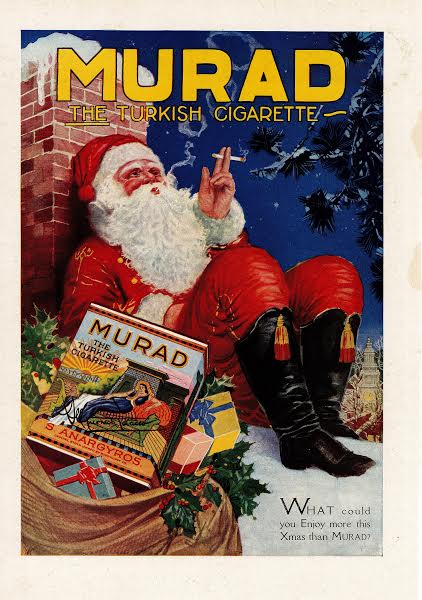 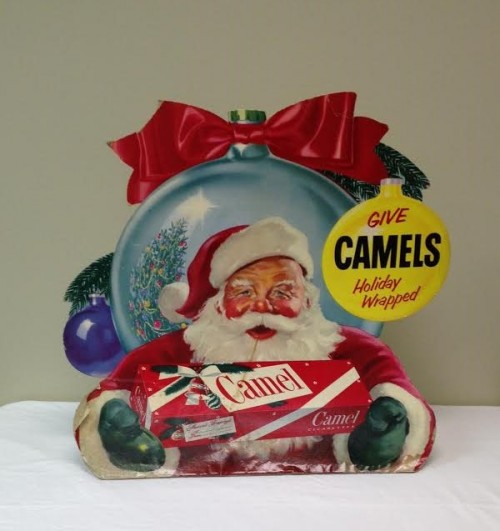 Print advertisements conveyed similar messages.  In a 1931 Player’s Please advertisement (manufactured by Imperial Tobacco Group), Santa reminded shoppers that “The ‘Present’ time is very near.” R. J. Reynolds advertisements from the 1950s showed Santa declaring that Camel, Cavalier, Winston, and Prince Albert were “4 Of The Grandest Gifts You Can Give.” 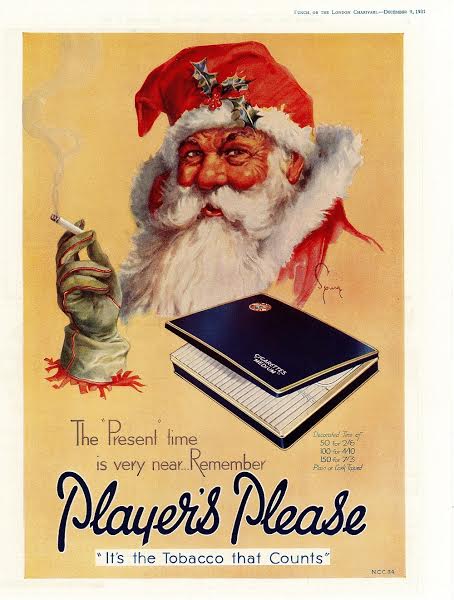 Pairing images of cigarettes with a benevolent figure like Santa Claus reinforced the notion that the products were safe.  However, researchers had started to formally document the connection between smoking and lung cancer as early as the 1930s.  And the tobacco industry itself (internally) documented links between the two in the early 1950s. By 1964, the causal connection was clear. In his “Smoking and Health” report, Surgeon General Luther Terry concluded that smoking caused lung cancer, and suggested that a causal link between smoking and heart disease also existed. That same year, almost one-half of Americans reported being smokers.

Advertising certainly contributed (and continues to contribute) to the behavior, as research reported by the World Health Organization indicates. Then, as today, the tobacco industry lured customers to its addictive and harmful products in enticing and jolly ways.

Jacqueline Clark, PhD is an Associate Professor of Sociology and Chair of the Department at Ripon College. Her research focuses on inequalities, the sociology of health and illness, and the sociology of jobs, work, and organizations.

Really interested to find this article ... we have a jigsaw puzzle my mum (aged82) remembers doing as a child - as do I ... the puzzle is a smoking Santa with Players please written across the bottom .. it is clearly a child’s puzzle ... about 60 pieces, large cut, I would be interested to know if the company gave them away promotionally or what ? Anyone any clue ?

Really it is like a joke that Santa is advertising for a cigarette brand. But what to do, in this modern world we are surrounded by stress and we have to take help these type of things. Oilax Cito two in one vaporizer is my friend for this type of stresses. You will get OILAX Cito Pro Vaporizer, Oil cartridge vaporizer and Wax Atomizer. This vaping pod utilize oil concentrate and also can be used to utilize wax concentrate. It has attachment to utilize thc or cbd oil cartridges.

Really it is like a joke that Santa is advertising for a cigarette brand. But what to do, in this modern world we are surrounded by stress and we have to take help these types of things. Oilax Cito two in one vaporizer is my friend for this type of stresses. You will get OILAX Cito Pro Vaporizer, Oil cartridge vaporizer, and Wax Atomizer. This vaping pod utilizes oil concentrate and also can be used to utilize a wax concentrate. It has an attachment to utilize THC or CBD oil cartridges.

You are absolutely right in everything that concerns the direct penetration of stress into our lives. The more developed the society, the more stress we get (It's not just about work or accidents.. People can easily get hurt in bad relationships.. It's hard for me to judge how to deal with it.. I just see that the use of antidepressants is increasing all the time .

Greetings! I was hooked by your answer about negativity in a relationship. But it seems to me that this is not the worst thing. There are many situations where a person is going through a big shock. It could be an accident, a fire, or a violent quarrel. Psychology has advanced a lot in the treatment of post-traumatic trauma, but sometimes therapy is not enough..People who experience psychological problems can use additional herbal preparations to balance the psyche - https://thirdshroom.com/product-category/magic-mushrooms/ This is a good help when classical psychotherapy does not cope with post-traumatic shock