Americans have a low opinion of Congress. Less than 10% of the voters think that Congress is doing a good job. But their own Representative . . . not so bad. A third of us think that our own rep deserves re-election (Rasmussen). Even that is low. Until recently, a majority of people approved of their own representative while disapproving of Congress in general. It’s been the same with crime. People feel safer in their own neighborhoods than elsewhere, even when those other neighborhoods have less crime.

Race relations too are bad . . . elsewhere. In the last year, the percent of Americans saying that race relations in the country are “bad” doubled (roughly from 30% to 60%). That’s understandable given the media coverage of Ferguson and other conflicts centered on race. But people take a far more sanguine view of things in their own community.  Eighty percent rate local race relations as “good,” and that number has remained unchanged throughout this century. (See this post  from last summer.) 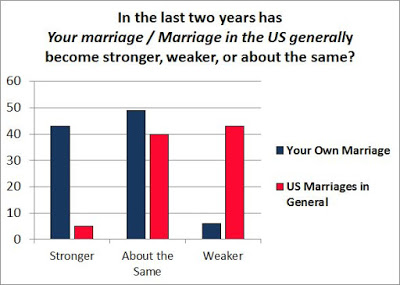 Why the “elsewhere effect”? One suspect is the media bias towards trouble. Good news is no news.  News editors don’t give us many stories about good race relations, or about the 25-year drop in crime, or about the decrease in divorce.  Instead, we get crime and conflict and a variety of  other problems. Add to this the perpetual political campaign with opposition candidates tirelessly telling us what’s wrong.  Given this balance of information, we can easily picture the larger society as a world in decline, a perilous world so different from the one we walk through every day.

At first glance, people seeing their own relationships as good, others’ relationships as more strained seems like the opposite of the pluralistic ignorance on college campuses. There, students often believe that things are better elsewhere, or at least better for other students. They think that most other students are having more sex, partying more heartily, and generally having a better time than they are themselves. But whether we see others as having fun or more problems, the cause of the discrepancy is the same – the information we have. We know our own lives first hand. We know about those generalized others mostly from the stories we hear. And the people – whether news editors or students on campus – select the stories that are interesting, not those that are typical.

Same sort of apparent reasoning when trying to estimate the amount of foreign aid or unemployment benefits you think your government is giving vs. the actual amount (these are somewhat classic studies on the problems of misperception).

Or (more recent) the amount of non-religious people you think live in your country vs. the actual amount.