No, poverty is not a mysterious, unknowable, negative-spiral loop

I don’t have much to add on the “consensus plan” on poverty and mobility produced by the Brookings and American Enterprise institutes, referred to in their launch event as being on “different ends of the ideological spectrum” (can you imagine?). In addition to the report, you might consider the comments byJeff Spross, Brad DeLong, or the three-part series by Matt Bruenig.

My comment is about the increasingly (to me) frustrating description of poverty as something beyond simple comprehension and unreachable by mortal policy. It’s just not. The whole child poverty problem, for example, amounts to $62 billion dollars per year. There are certainly important details to be worked out in how to eliminate it, but the basic idea is pretty clear — you give poor people money. We have plenty of it.

This was obvious yet amazingly not remarked upon in the first 40 minutes of the launch event (which is all I watched). In the opening presentation, by Ron Haskins — for whom I have a well-documented distaste — started with this simple chart of official poverty rates: 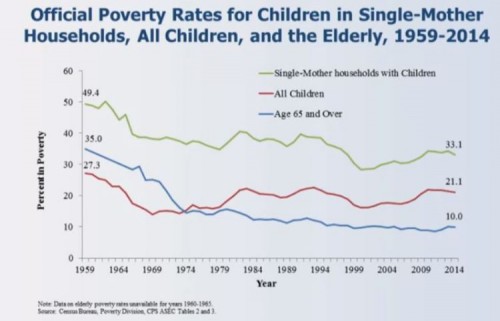 He started with the blue line, poverty for elderly people, and said:

The blue line is probably the nation’s greatest success against poverty. It’s the elderly. And it basically has declined pretty much all the time. It has no relationship to the economy, and there is good research that shows that its cause at least 90% by Social Security. So, government did it, and so Social Security is the reason we’re able to be successful to reduce poverty among the elderly.

And then everyone proceeded to ignore the obvious implication of that: when you give people money, they aren’t poor anymore. The most unintentionally hilarious illustration of this was in the keynote (why?) address from David Brooks (who has definitely been working on relaxing lately, especially when it comes to preparing keynote puff-pieces). He said this, according to my unofficial transcript:

The good news is that for all the complexity of poverty, and all the way it’s a cloud, it offers a political opportunity, especially in a polarized era, because it’s not an either/or issue. … Poverty is an and/and issue, because it takes a zillion things to address it, and some of those things are going to come from the left, and some are going to come from the right. … And if poverty is this mysterious, unknowable, negative spiral-loop that some people find themselves in, then surely the solution is to throw everything we think works at the problem simultaneously, and try in ways we will never understand, to have a positive virtuous cycle. And so there’s not a lot of tradeoffs, there’s just a lot of throwing stuff in. And social science, which is so prevalent in this report, is so valuable in proving what works, but ultimately it has to bow down to human realities – to psychology, to emotion, to reality, and to just the way an emergent system works.

Poverty is only a “mysterious, unknowable, negative spiral-loop” if you specifically ignore the lack of money that is its proximate cause. Sure, spend your whole life wondering about the mysteries of human variation — but could we agree to do that after taking care of people’s basic needs?

I wonder if poverty among the elderly once seemed like a weird, amorphous, confusing problem. I doubt it. But it probably would if we had assumed that the only way to solve elderly poverty was to get children to give their parents more money. Then we would have to worry about the market position of their children, the timing of their births, the complexity of their motivations and relationships, the vagaries of the market, and the folly of youth. Instead, we gave old people money. And now elderly poverty “has declined pretty much all the time” and “it has no relationship to the economy.”

Philip N. Cohen, PhD is a professor of sociology at the University of Maryland, College Park. He is the author of The Family, a sociology of family textbook, and writes the blog Family Inequality. You can follow him on Twitter or Facebook.

Poverty need not be defined as a lack of money. That is a credible definition. Another credible definition; Poverty is the inability able to produce money. These are distinct issues that often get conflated in discussion. This being said, giving people a basic income could be a good way to help them become productive.

Here is the distinction in play: if you give money to a person suffering from serious addiction it is more likely than not they will spend the money on drugs. Or, they will spend the money on food, leaving a next saving that can be spent on drugs. If you give money to someone who no longer has a skill needed by someone else they may take that money as a subsidy to learn a skill for which there society has a need. It makes sense to trust the latter and not the former with money.

Giving people money could help them learn how to produce their own money and regain their dignity. It can really help people fall victim to predatory lenders and the other expensive aspects of being poor.

However, to break addiction a person needs the love and support of a community until they can change their behavior from indulgent consumer into productive member. Money doesn't solve this problem.

Similarly, poverty (as in ability to produce for yourself) is often associated with lack of impulse control, short term thinking, and lack of education. Giving money to someone who has been practicing being unproductive may not help them learn to produce for themselves, they may stay in poverty once the money is spent if they haven't learned how to spend it wisely and think of their long term interests.

This is great information. THanks for posting.roof painters Rockhampton