The politics of euphemism: Cop-talk for shooting a suspect

The police do not shoot people. Not any more. Apparently, the word shoot has been deleted from the cop-speak dictionary.

A recently released video shows a Chicago cop doing what most people would describe as shooting a kid. Sixteen times. That’s not the way the Chicago Police Department puts it.

Chicago Tribune: A “preliminary statement” from the police News Affairs division, sent to the media early the next morning, said that after he had refused orders to drop the knife, McDonald “continued to approach the officers” and that as a result “the officer discharged his weapon, striking the offender.”

In Minneapolis, Black Lives Matter is protesting what they think is the shooting of Jamar Clark by a police officer. How wrong they are. The police did not shoot Clark. Instead, according to the Minnesota Bureau of Criminal Apprehension.

MPR News: At some point during an altercation that ensued between the officers and the individual, an officer discharged his weapon, striking the individual.

Worse, the press often doesn’t even bother to translate but instead prints the insipid bureaucratic language of the police department verbatim.

Fearing for their safety and the safety of the public, they fired their guns, striking the suspect.

(Other sources on these stories do put the press-release prose in quotes. Also, in California, officers who discharge their weapons also usually “fear for their safety and the safety of the public.” I would guess that the phrase is part of some statute about police discharging their weapons)

Here’s another example from the Wilkes Barre area: 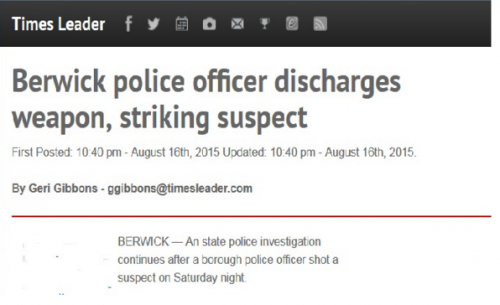 The writer nailed the lede: a police officer shot a suspect. But whoever wrote the headline had majored in Technical Language and Obfuscation rather than Journalism.

Does the language make a difference? I don’t know. Suppose the headlines two weeks ago had said, “In Paris, some people discharged their weapons striking individuals.”

Here is a related analysis: http://www.mcsweeneys.net/articles/an-interactive-guide-to-ambiguous-grammar

The term "officer-involved shooting" is similarly insipid obfuscation and must be purged from public discourse.

Where is a grammarian or an editor when one is needed? What sentence does this clause, masquerading as a sentence, belong to; 'Instead, according to the Minnesota Bureau of Criminal Apprehension.'?