On the insidious sexism of the Covergirl Star Wars collection

So, Star Wars is out with a new movie and instead of pretending female fans don’t exist, Disney has decided to license the Star Wars brand to Covergirl. A reader named David, intrigued, sent in a two-page ad from Cosmopolitan for analysis.

What I find interesting about this ad campaign — or, more accurately — boring, is its invitation to women to choose whether they are good or bad. “Light side or dark side. Which side are you on?” it asks. Your makeup purchases, apparently, follow. 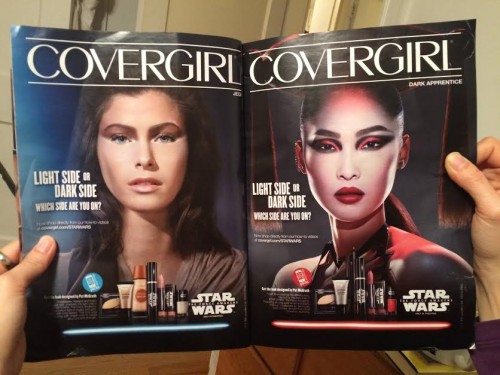 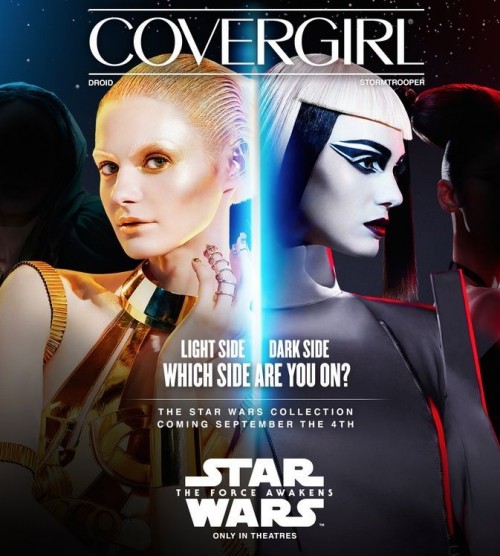 This is the old — and by “old” I mean ooooooooold — tradition of dividing women into good and bad. The Madonna and the whore. The woman on the pedestal and her fallen counterpart. Except Covergirl, like many cosmetics companies before that have used exactly the same gimmick, is offering women the opportunity to choose which she wants to be. Is this some sort of feminist twist? Now we get to choose whether men want to marry us or just fuck us? Great.

But that part’s just boring. What’s obnoxious about the ad campaign is the idea that, for women, what really matters about the ultimate battle between good and evil is whether it goes with her complexion. It affirms the stereotype that women are deeply trivial, shallow, and vapid. What interests us about Star Wars? Why, makeup, of course!

If David — who also noted the inclusion of a single Asian model as part of the Dark Side — hadn’t asked me to write about this, I probably wouldn’t have. It feels like low hanging fruit because it’s just makeup advertising and who cares. But this constant message that women are genuinely excited at the idea of getting to choose which color packet to use as some sort of idiotic contribution to a battle of good versus evil is corrosive.

Moreover, the constant reiteration of the idea that we are thrilled to paint our faces actually obscures the fact that we are essentially required to do so if we want to be taken seriously as professionals, potential partners or, really, valuable human beings. So, not only does this kind of message teach us not to take women seriously at all, it hides the very serious way in which we are actively forced to capitulate to the male gaze — every. damn. day. — and feed capitalism while we’re at it.

I thought the ads portray the *same* model in two different makeup modalities. You sure the are different people?
Otherwise, I agree with your points.

While I appreciate your critique of the themes of the ad, I always bristle a little when people claim that women don't really want to wear makeup, we're just being forced to by society. I didn't wear anything beyond foundation/concealer until I was in my late twenties (during which time I got married--so yes, you can attract a guy without makeup). Then I picked up the hobby of nail art, which led to creating and selling my own unique nail polishes. I consider this to be a great creative outlet for me, and many of the women (and men!) I've met in the nail community don't care what other people think, they're just doing it for fun. I started playing around with more eye and lip products because I think it's neat to see how different they can make you look. That's part of what they're trying to do in this Covergirl ad too, I think. You don't have to be bare-faced to be a feminist.

Also the light side and dark side question is not just the makeup, it's the advertising slogan for all of the Star Wars merchandise that is coming out at the moment. The store where I work has a whole section devoted to the question "join a side"

Why on earth would a makeup ad, made for the express purpose of featuring makeup so as to entice people to buy makeup, suggest the choice between wearing makeup or not wearing makeup? Of course it's going to present two choices that are both makeup. I mean, that's the entire point.

This is also not the first time there's been a makeup tie-in with a film, but it is, AFAIK, the first time for one that's tied to a film that's not thought of as a female-centric film. (There have been makeup and nail polish tie-ins for the Hunger Games series that have been incredibly popular. The nail polish line for the first film sold out in brick and mortar stores the day after the movie release.)

The write up is puzzling to me. The company is a cosmetics company. What would the choices be other than "buy our products"?

And it's tied in with a movie franchise that is all about the light and dark sides of the Force. So given a this 38-year-old duality, with neutral being a non-choice, what other choice is there to make?

But after reading the piece and not finding any sort of conclusion addressing either point of personal puzzlement, it makes me wonder what a Star Wars: The Force Awakens cosmetics ad that is tasked with choosing a side would look like if Lisa Wade were the creative director?

There is an obvious disconnect here with actual knowledge of the Star Wars fandom. The heavy bulk of charity work performed by Star Wars fans is done by the group known as the 501st Legion, which consists of people dressed in the costumes of the villains (the Dark side). You might want to argue, and I wouldn't object, as to why the representations of evil in the movie are favored by the average people, but the fact is that nobody in the Star Wars fandom takes this as an undesirable situation and certainly no one would label a "dark side" girl as a whore.
The second largest group of costume users are the "Slave Leia" fans. In the movie, the character is forced to wear the skimpy costume and in the end she ends freeing herself and killing her oppressor. So... would that make her, the light side, because she is the hero? Or is she the dark side, and thus the whore, because of the outfit she had no choice in wearing?
In the end... these are just labels that come from situations in the movies, if you want to force them into your view of the world, please go ahead. Real Star Wars fans know different.

I see your point, totally. But I have to say, I was kind of pumped when I first saw the ad campaign. Because Star Wars seems to usually stick to either stereotypically masculine product placement, or else products that aren't overly marketed to women. (So like, lots of action figures and fast food, etc.) I was kind of happy to see that they're choosing to identify female consumers as potentially interested in Star Wars. As for the Light Side/Dark Side - again, I do see your point and Madonna/Whore is real. But like... in the context of Star Wars, that phrasing has a particular meaning that I think makes it a bit different. Anyway! Thanks for a thoughtful piece :)

What scares me the most is it says PhD beside the authors name.
You clearly don't understand star wars fans. I own over 100 articles of clothing that is star wars, star wars shoes, movies, vinyls, games, beding... everything. I don't go a day with out having it in my life. I am a fan girl. AND I love make up. I don't wear it every day but when I do feel like being made up, I will go all out. I would love to have this make up in my life but I can't because NO WHERE SHIPS TO CANADA. Now I hate CoverGirl.

My main concern is the whore thing. How dare you call the "dark side" a whore, or the girl in the picture OR any girl wearing make up. They are saying choose a light look ("natural") or dark look ("edgy") People like you are the reason why I hate feminist. A bunch of crazy b!#$%es took that word and made it bad. This is the worst article I've ever read from anyone with a PhD. The worst article about make up. The worst representation of feminism and sister hood. Maybe you should B!#$% less and try a little eyeliner. Sometimes looking in the mirror with a made up face can calm the man hating hormones.