Protecting (white) women in the bathroom: A history

With interest, I have been watching the resistance to the right of trans people to choose public restrooms based on their identity instead of their biology at birth. Though there is no evidence that allowing trans people to use the bathroom of their choice will put anyone in danger, one of the arguments against doing so is that women or children will be victimized. Completely tone deaf to the actual experiences of trans people, the idea is nonetheless framed as allowing men to use women’s restrooms: 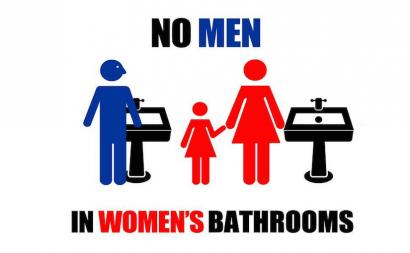 I can’t help but want to draw connections to history and a recent post at Notches, a history of sexuality blog, helped me do so.

Recall that it wasn’t so long ago that black and white people weren’t allowed to use the same restrooms in public. When this practice came under attack, segregationists in the South, like anti-trans choice advocates today, claimed that it would be dangerous for white women, claiming that they would be infected with black women’s venereal diseases.

White women participated in this resistance, protesting against the integration of their bathrooms. A girl at Central High in Little Rock, AR, for example, claimed that bathroom integration functionally stole bathroom facilities from white girls. “Many of the girls won’t use the rest rooms at Central,” she said, “simply because the ‘Nigger’ girls use them.”

Several decades later, conservatives fighting the Equal Rights Amendment (ERA) for women drew again on racism and the politics of the bathroom. They stoked fear in the American public by suggesting that passage of the ERA would lead to the sex integration of bathrooms. Still smarting from the loss of racial segregation, they even compared race and sex segregation, hoping that the public would be opposed to both.

In this anti-ERA flyer, the final threat is: “Do you want the sexes fully integrated like the races?” 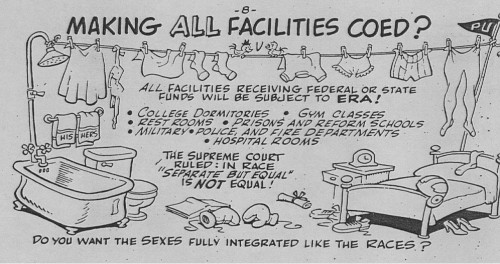 Combining the two was a powerful tool, exploiting the longstanding racist belief that white women were uniquely vulnerable to predatory, sexually voracious black men. Both race and sex integration of bathrooms would mean that white women would be going to the bathroom not just with black women, but with black men. “I ain’t going to have my wife be in the bathroom with some big, black, buck!” said one North Carolina legislator.

This same argument, now with trans women as the target, is being made today.

Not the same argument at all. Restrooms segregated by race are wrong because women of all skin colors are still all women. The issue with letting men who claim to be women into women's restrooms is that it gives all men unquestioned access to these spaces. So a man with bad intentions now has more access to his prey (women and girls). He can enter the space unchallenged and remain in there for as long as he wants. It is up to women to figure out, after they are in an enclosed space with him, whether he is a good person or a bad one. Will women be told to stay out of public restrooms now, if they don't "want" to be raped? Will a woman adjusting the fit of her blouse now be told she was inviting assault if a man walks in while she is doing it and attacks her? There are separate restrooms and changing facilities for men and women in our culture for safety and privacy. The push should be for more one-person lockable restrooms that anybody can use, rather than putting women at risk. One Google search for "woman attacked in bathroom" brought up dozens of articles on men assaulting women in restrooms. A good reason to NOT make it easier for men to have access to women's spaces, the risk of injury and death to women and children is just too great.

If males claiming to be women are allowed free and unquestioned access to spaces set aside for girls and women, then women will have no justification, no basis, for questioning the presence of any male person whatsoever in women's spaces or demanding they leave.

How are we to distinguish between a transwoman and a man? Gender, we are told repeatedly, is what is in your head, your "identity," how you "feel," right? It has nothing to do with gonads or chromosomes or skeletal structure, or whether cells in your pituitary gland release luteinizing hormone continuously or on a monthly, cyclical basis. Furthermore, public toilets and showers are spaces for the performance and affirmation of gender, not for addressing and managing biological functions, correct? Besides, everyone knows that sex and biology are social constructs, while gender identity is innate. It is a function of brain sex. This, anyway, is what trans activists tell us.

They tried gender neutral bathrooms at the University of Toronto. Didn't work out so well.

The author of this piece, Ph.D. notwithstanding, is deeply confused. Sex segregation is legal. US law recognizes a "fundamental,
irreducible reproductive asymmetry" between males and females, and it is legal to discriminate when taking this asymmetry into account. US law also
recognizes a right to privacy, and this has been interpreted as meaning women have the right not to have to be unclothed, whether completely or partially, around the opposite sex, in bathrooms, locker rooms, etc. Would the professor support eliminating that right to privacy? Finally, the laws concerning these rights in the workplace and in education, Title VII and Title IX, refer to sex, not gender. So, legally, women still have the right NOT to put up with men in their bathrooms and locker rooms. Executive orders issued by the Obama Administration do not change this reality, though they are trying to do so.

Finally, sex is not mutable. No matter how much money a transwoman pays to acquire facsimiles of the secondary sex characteristics of the female sex, no matter how much they pay for their wardrobe, etc., they cannot change their sex. They are men who have culturally appropriated the external and superficial trappings of femininity and womanhood.

Many of these comments are really degrading toward trans folks.

Just curious if the folks who run this blog feel any sense of responsibility to moderate the discussion or even to join in and address any of these comments. It seems like the disparaging/anti-feminist/anti-LGBT comments at this site have really come to outnumber progressive commenters at this site.

[…] Wade at Sociological Images looks at the current resistance to allowing trans people to choose public restrooms based on their gender identity, and how it relates to the history of race-segregated restrooms […]

On that note, have you seen this? Transgender people. You can't always tell by eyeballing them.

Ummm, Trans folk understand each others struggles right. So why don't we just build a third bathroom at all government facilities. Would that work?

Wow. First sentence, and you're already full of shit. Are you lying on purpose about there being " no evidence" or are you just completely unwilling to use Google to find the numerous women and children who have already been raped/molested etc BECAUSE of this. Per usual, women's and childrens safety ALWAYS comes last.

Whoever set up this blog post is brilliant! The picture that shows up on facebook is the racist ERA cartoon. MUCH better choice than the anti-trans graphic at the top, for those of us who want to share this. Thank-you!

People, our understanding of the world and human physiology has improved. Due
to this, some of our oldest assumptions about sex have proven false
(xx/xy does not automatically result in one gender or another and that
is not even getting to transgender issues, just general population of
pregnant women some are XY)

This is resulting in some of our ideas about each other needing to be updated. I'm sorry this is hard. Change is almost never easy.

Gender is literally and provably a word defined as the social aspect of sex roles, not the sex itself. I'm sorry people have been using "sex" and "gender" interchangeably, but they are provably incorrect to do so.

“In fact, gender dysphoria—the official psychiatric term for feeling oneself to be of the opposite sex—belongs in the family of similarly disordered assumptions about the body, such as anorexia nervosa and body dysmorphic disorder,” said McHugh.

“Its treatment should not be directed at the body as with surgery and hormones any more than one treats obesity-fearing anorexic patients with liposuction,” he said.

“Transgendered men do not become women, nor do transgendered women become men,” he said. “All (including Bruce Jenner) become feminized men or masculinized women, counterfeits or impersonators of the sex with which they ‘identify.’ In that lies their problematic future.”

So...thanks to lunatic liberals and the LGBT agenda of forced acceptance, laws are being made based on a person's "internal feelings" rooted in mental illness.

The following studies provide verifiable evidence that transgenders overwhelmingly suffer from a variety of mental disorders, yet the liberal media refuses to report studies such as these:

1. 90 percent of these diverse patients had at least one other significant form of psychopathology” reported Case Western Reserve University, Cleveland, Ohio, Department of Psychiatry in a 2009 study of transgender outcomes at their clinic. In other words, 90 percent of the patients were suffering from a mental illness that gender surgery did not alleviate.

2. 61 percent of the patients treated for cross-gender identification (359 people) had other psychiatric disorders and illnesses, notably personality, mood, dissociative, and psychotic disorders according to a 2003 Dutch survey of board-certified Dutch psychiatrists.

3. A 2013 University of Louisville, KY study of 351transgender individuals found that the rates of depression and anxiety symptoms within the study “far surpass the rates of those for the general population.” About half had depressive symptoms and more than 40 percent had symptoms of anxiety.

Science and research backs the notion "transgenders" have multiple mental disorders and basing laws on a mental illness is detrimental to the benefit of society. Transgenders need medical help instead of having their illness pandered to and legitimized as normal behavior by liberal, cultural-Marxist bent on imposing their immoral agenda on society!

Also people never seen to notice that there are actually more than two sexes.

I see trans activists are exploiting Black American's struggle against Jim Crow laws to push their agenda. If the trans community cared about black women they would not have supported the transwoman (Luis Morales AKA Synthia China Blast) that raped and murdered a little black girl named Ebony Williams.

All this fuss over a false, perceived sense of safety. A man doesn't have to pretend to be a trans woman to sneak into women's toilets and assault them. He can just walk in when nobody is looking, or he can disguise himself as cleaning staff.

The real danger is to those trans women, forced to use male spaces, where they are at much greater risk of being the victim of sexual or non-sexual violence just for daring to be who they are, where they are.

Time to turn this safe spaces argument on its head. Both from the point of all women (cis or trans) needing protection from male (sexual or just physical) violence, and also acknowledging that keeping trans women out of women's toilets does nothing to protect cis women from the real sex predators.

[…] from The Federalist an oft quoted white supremacist blog. This should enthrall people of color who broke the chains of slavery from Texas legislators with Sanford’s mind set. We will see that argument from the haters in […]

This windows 10 it is very high profile how to change windows password windows 10 site to be great page for the index.