At Family Inequality, sociologist Phil Cohen argues that it would be relatively easy for Americans to raise the funds to end child poverty. All it would take is an average of $578 per non-poor family per year. Taxed on a sliding scale, the rich would pay more and the middle and working class less. This is what the tax would look like (more rich on the left, less rich on the right): 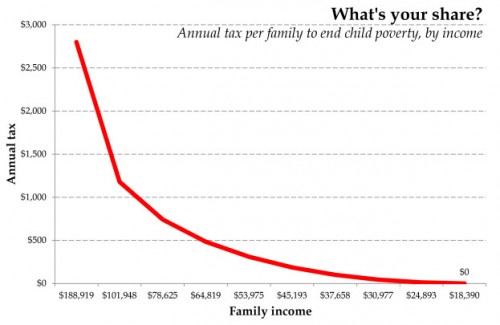 Thinking that ending poverty for children is “hard” is part of the problem, he argues.

Ideas like these are a resource for conservatives who don’t want to help poor families or don’t want to help badly enough to let it come out of their pockets. They can argue complexity and shrug. But Cohen wants us to recognize that it would be easy.

And, if it’s so easy, then the persistence of child poverty means that we just don’t want to do it.

Some people say the Pope should stick to religious matters, and not speak about politics. Some people also say a social scientist should stick to scientific analysis, and not make moral demands. You can ignore my moralizing, as long as you understand the fact that child poverty is a choice we make with our policies. Eliminating child poverty does not require restructuring American families, mass contraception campaigns, or a new ethos of shame. It just costs a little money.

Assuming a "scientist" might want to eliminate the HARMFUL EFECTS to a child of living in a family environment with income below the established poverty level, i.e., as opposed to simply bringing the family's income above the poverty line, what is being proposed to do so? Cohen offers...nada.

Reading Cohen's rather banal article reminds one of the adage, there is a simple solution to every complex problem and it's wrong. He attacks an arbitrary income line, makes no attempt whatsoever to account for additional forms of support some children might or might not have, offers no thoughts about how to ensure taxpayer's money addresses the real needs of these children, and has the impudence to castigate the rest of us for "not understanding the scale of the population or the economy". Please. No wonder conservatives are convinced government spending is a waste.

Cohen can wrap himself in papal cloak or moralize all he wants and I will defend his right to do so. But I challenge the legitimacy of labeling this armchair puff-piece of his "science". And I encourage students to think hard about the real world challenges and difficulties involved in addressing problems of children in low-income environments.