Masculinity, Marines, and My Little Pony

In 2010, Hasbro launched the fourth generation of the long lived My Little Pony© TV programs and toys.  What would happen in the next five years shocked not only Hasbro, but the world.  A new type of fan emerged: Bronies, originally dedicated men aged 16 to 25, but now both men and women from 14 to 35, primarily. Members of all branches of the military love My Little Pony, but there is a perception among them that Marines are the majority.

I’ve been analyzing social media and observing presentations on Military Bronies at Brony conventions in an attempt to understand how they experience and negotiate their fandom within the military.

You don’t have to go very far on the net to find them.  This is no trolling of middle aged men in the dark basements from the blackhole of the net. These are proud men and women in the service, coming together on pages like FOBEquestria.com or Military Bronies on Facebook (with over 10,000 members).

They have created not only their own niche in the fandom, but their own art, music, and even military paraphernalia. Here’s an example of fan art by Sir-Croco: 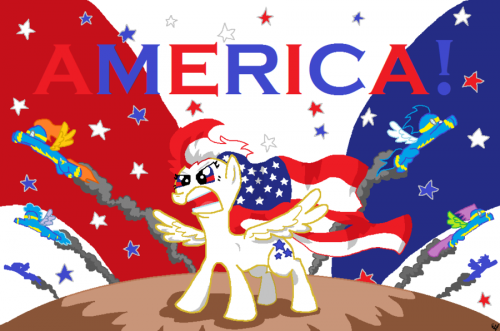 Interestingly, they have had an influence in the progression of the show. It is believed, for example, that the development of the show’s Wonderbolts Academy and characters was a response to military fans. The show’s creators acknowledge that they mirror the Navy and Air Force flight demonstration teams.  And a former US Navy fan became so “horse famous” (the act of gaining notoriety as a fan icon), that he has now joined the cast.

Military Bronies are quick to defend their love for My Little Pony and point out the positive lessons taught by the show. For instance, the US Army’s Values statement includes the following: Loyalty, Duty, Respect, Selfless Service, Honor, Integrity, and Personal Courage, while the elements of Harmony in My Little Pony are Loyalty, Honesty, Generosity, Laughter, Kindness, and Magic. With a bit of creativity, one can easily see similarity between the two.

Because My Little Pony is made by Hasbro for young girls and features females as their “mane” characters, some consider it to be deviant for teen and adult men to like the show. As one Brony said, they’re sold on “the pink aisle!” Male Military Bronies at times suffer from the kind of stigma and bullying reserved for feminine men and, because they are also often assumed to be gay, homophobia. One Brony, for example, discussed how his platoon sergeant refuses to inspect his room because it is plastered with My Little Pony paraphernalia that the sergeant does not want to see or be near.

But it’s okay to be gay in the military now, at least policy wise. It may be that the repeal of “Don’t Ask, Don’t Tell” actually opened up space for Military Bronies. Before the repeal, love of My Little Pony might have been interpreted as a “tell” and punished accordingly, but today there can be no institutional response to soldiers’ sexual orientation, so stigmatization when it occurs seems to remain informal.

Male Military Bronies are a fascinating site of negotiations of masculinity in one of its strongest bastions. Along with their female counterparts they also represent an interesting new form of fan. I hope that my research will teach us a lot about how men negotiate gendered expectations and will check back in as my project develops.

Kevin W. Martin, MA is a doctoral candidate at the University of Missouri, specializing in queer theory, identity, and deviance. You can follow him in Linkedin, Facebook, and Twitter.

How is this new or any different than adult fans of shoujo anime like Sailor Moon?

I would like to know what percentage of bronies are the creepsters who sexualize the characters, because that's what turns my nose to them.

The singular form of bronies is brony, as in brother+pony, not bronie.

My Little Brony: Imperialism is Magic

Peace, love and murder in the middle east!

I wouldn't read more into it than some folks having a little fun. So long as they "play well with others" it's all good.

I don't understand it not because of gender dynamics but because this is a show made for children–what is this trend of adults liking things simple enough for toddlers to understand? I tried to see what all the fuss was about and watched a few episodes, and it's kind of like having a huge adult fan base for Barney.

Also this is not like women who like Sailor Moon as adults, because most of those adults liked it when they were the appropriate age (teenagers or earlier) so now it's kind of a nostalgia thing. Even coming to Sailor Moon as an adult, though, it's at least made for an old enough audience that it has some adult themes--unlike My Little Pony which really is made for very young children.

[…] The dissertation of a PhD candidate in Missouri takes on an unusual crossover. His website gives a little more insight to his research and the project. […]

[…] from the Department of Random: Masculinity, Marines, and My Little Pony, an exploration of the “Bronies” phenomenon. Fascinating stuff, and challenging gender norms in unexpected […]

Well isn't there a connection with people with lack of social skills or failure to progress through life normally with people in the army. I'm guessing a lot of these people are people who didn't do well in school or didn't have many friends or good family so they joined the service. A lot of people that have done service from what i've seen are usually poverty stricken individuals or individuals who have a very hick type mentality.