There is a light bulb in a fire station in Livermore, CA that has been burning since 1901. It was manufactured in the late 1890s. And, yes, there is a BulbCam. 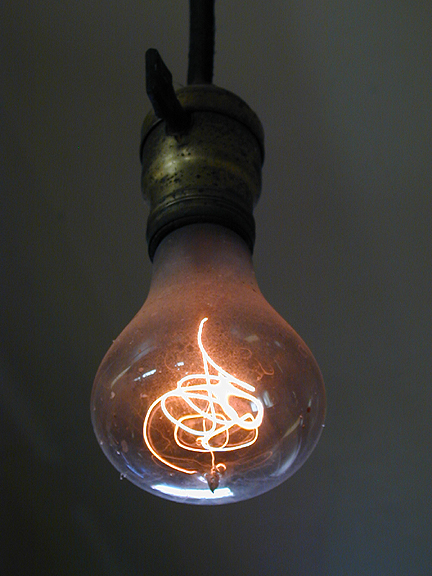 According to Hunter Oatman-Stanford, writing for Collectors Weekly, the first homes that had electricity were serviced entirely by electric companies. He explained:

Generally, customers would purchase entire electrical systems manufactured by a regional supplier who would handle installation and upkeep. If a bulb “burned out,” meaning the filament had deteriorated from repeated heating, someone would come and replace it for you [for free].

Given this business model, it made sense to try to develop bulbs that would burn out as infrequently as possible, and the goal was to make ones that would last forever. The one in Livermore was made by the Shelby Electric Company and, interestingly, no one remembers what they did to make their time-defying bulbs. For now, at least, their secrets are a mystery.

Only later, when electric companies turned over the job of replacing lightbulbs to homeowners, did they decide that it would be more profitable to make cheap bulbs that burned out frequently. As of around 1910, companies were charging the equivalent of $33 for a 1,500 hour lamp (which is about the same life of an incandescent bulb today). Yikes. At least the price has gone down.

We call this planned obsolescence: the practice of designing products with a predetermined expiration date aimed at forcing consumers into repeat purchases. Since the mid-1900s, more and more products have been literally designed to fail. In some cases, we seem to have fully accepted cyclic purchasing (think, for example, of the constant replacing of our electronic devices) or we are embarrassed into doing so (think fashion and the stigma of driving an old car). Other times, like with the lightbulb, we just assume that this is the best engineers can do.

Planned obsolescence is criticized for being wasteful. How many light bulbs sit in landfills today? How many natural resources have we extracted or burned up to make their replacements? How many cargo ships and semis have been filled with lightbulbs and taken around the world?

The little lightbulb in Livermore is a great reminder that just because we live in technologically advanced societies doesn’t mean we always have access to the most advanced technology. Other forces are at work.

But how often do they have to replace the bulb cam?

The stigma of driving an old car? Please. I think it's more a stigma of driving a car that is clearly in need of repairs. A noisy muffler, smoky tailpipe, etc., will get you stares from others. Simply driving a well-maintained old car should not attract anyone's attention, and if it does, those people are assholes.

The situation with bulbs is a bit more nuanced than Lisa Wade makes it. There is a tradeoff between the lifetime of the bulb and its efficiency for incandescent bulbs (running hotter is more efficient, but reduces lifetime). See http://spectrum.ieee.org/geek-life/history/the-great-lightbulb-conspiracy for more detailed information. There is pretty good evidence for the short lifetime bulbs being the start of planned obsolescence, but there is more to the story.

I'm sorry. So what exactly is the problem with planned obsolescence?

"Planned obsolescence is criticized for being wasteful."

It's really hard to grasp how big this problem is, but if you're a visual kind of person, check out the work of Chris Jordan:

Depicts 426,000 cell phones, equal to the number of cell phones retired in the US every day