According to Nicole Arbout’s youtube video “Dear Fat People,” fat people deserve to be ridiculed and treated poorly. The comedian mocks obese people and accuses them of being lazy, smelly, self-destructive, and a burden to the health care system and those around them.  Fat people, she also suggests, cause heartache and embarrassment to their loved ones and are public nuisances to strangers by taking up too much space on airplanes and getting the closest spaces in shopping mall parking lots. Arbour even compares fat bodies to the Michelin Man and implores those who are overweight to put down the coke and fries, start exercising, and get healthy.

In case Arbour’s point was lost amid her six-minute diatribe, “Fat shaming is not a thing. Fat people made that up.”

Over a decade ago work supported by Yale University’s Rudd Center for Food Policy and Obesity showed that fifteen percent of respondents would be willing to give up 10 years of their lives to avoid being fat. Nearly one-half of respondents would give up one year of their lives to do the same. About eight percent of these same survey respondents also indicated they would rather have a learning-disabled child than an obese child (source). Such findings illuminate clearly the stigma associated with being obese as well as the fear that people have of being targets of the prejudice and discrimination stemming from it.

These fears are well founded. Obese people continue to face prejudice and discrimination in a wide variety of ways, according to recent research from the Rudd Report. In the educational system, overweight and obese children report being teased and bullied by peers and teachers alike.

Obesity also has consequences in the workplace. Those who are obese can expect to earn lower wages and be promoted less often than their thinner coworkers, despite positive work evaluations. 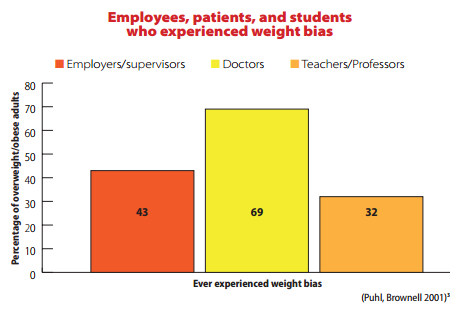 Overweight and obese people should not expect to find respite from the health care system either. Survey data consistently show that a significant number of doctors and nurses think obese patients are lazy, awkward, and noncompliant. Many of these same medical professionals also report being repulsed by such patients, attitudes which certainly affect the type and quality of care that obese patients receive.

To be sure, obesity contributes to health conditions like heart disease, some forms of cancer, diabetes, among others. It can also lead to early death, conclusions that Arbour’s video also makes. But obese people do not deserve to be ridiculed or discriminated against.

While Arbour now claims that “Dear Fat People” and the humor in it is satire, she perpetuates longstanding beliefs about overweight and obese people, legitimates the unfair treatment that they face on a daily basis, and proves that, yes, fat shaming is a thing.

Jacqueline Clark, PhD is an associate professor of sociology and chair of the department at Ripon College. Her research focuses on inequalities, the sociology of health and illness, and the sociology of jobs, work, and organizations.

I think that the idea that obesity can be cured by willpower is useless at best and probably quite harmful. To quote Susan Sontag: "Theories that diseases are caused by mental states and can be cured by will power, are always an index of how much is not understood about the physical terrain of a disease." Telling overweight people just to eat less and/or exercise more will only succeed in making them feel worthless. I know, I've been here (my highest BMI was 31). I'm lucky to have run across Gary Taubes' Good Calories Bad Calories that explained it was not as simple as just eating to much, and helped me get back to a healthy weight.

And if you haven't seen it yet, do take a look at Peter Attia's TED talk, in which he admits feeling contempt for an overweight patient - and then later finds out he was probably wrong, and apologizes. Very touching. https://www.youtube.com/watch?v=UMhLBPPtlrY

I know a thin guy who can and has eaten an entire pie in a day, subsists on french fries, pasta, and donuts, never ever works out, and once told me that standing up took "too much effort." But while he eats dangerously unhealthfully and in great quantities, his body simply does not show it. Even his cholesterol was like maybe one point above normal. He's thin and can't help being thin. But everyone treats him like he must work out and care about himself, while if I don't drink water and eat more than a lettuce leaf, I'm told that I need to eat less and exercise more. And I HATE donuts, too. I eat fish and veggies and lean meats, but if I so much as squint at a carb three miles away, I'll gain 5 lbs.

Sociology topic short paper. please sure submit it before the – MyEssay.help — September 3, 2020

Sociology topic short paper. please sure submit it before the | Expertise Writers — June 18, 2021

Sociology topic short paper. please sure submit it before the - Veteranessays.net — January 16, 2022