Why is it so hard to give Taylor Swift credit for 1989?

Musician Ryan Adams recently released an album cover. A cover, that is, of an entire album written and performed by Taylor Swift. Both albums are titled 1989. 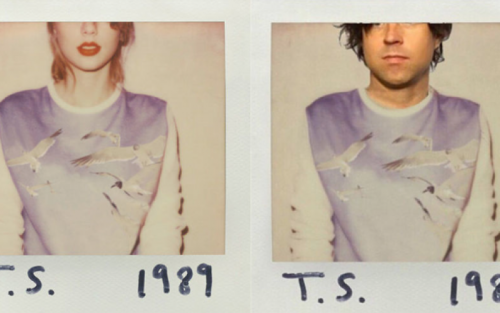 Critical praise for Adams’ version was immediate, turning quickly to a comparison of the two. At There’s Research on That!, Jacqui Frost explained that there was…

…a media frenzy about which album is “better” and who deserves credit for the “depth and complexity” that many say Adams brought to Swift’s poppier original. Some reviews argue Adams “vindicated” Taylor Swift as an artist; others argue that emotional depth was already present in Swift’s songwriting…

Swift’s 1989 was the best selling album of 2014 — by popular vote, it was obviously an excellent album — but many people seemed not to notice. Instead, they wanted to talk about who should get credit for the quality of Adams’ album, as if whether there was anything good there to begin with was an open question.

Frost draws on sociological research to suggest that gender might help explain why we have such a hard time giving credit to Swift.

First, she notes that musical genres are gendered and we tend to take feminized genres less seriously than masculinized ones. “Many publications that reviewed Adams’ version [of 1989],” for example, “did not review Swift’s original.” This may be because serious music critics don’t review pop.

Second, research shows that male creatives in the music industry are generally more likely to get credit than females ones. Frost writes:

[M]ale musicians, regardless of genre, are more likely to receive critical recognition and be “consecrated” into the popular music canon. Women are less likely to be seen as “legitimate” artists and are more often judged on their emotional authenticity and connections with “more” legitimate, male artists.

In fact, Frost notes, “the albums will be competing for a Grammy this year, and many think Adams will take it over Swift

Whatever you think of the two albums, the instinct to dismiss Swift’s album as “just pop” and Adams’ version as “artistic” is likely tied to the powerful ways in which the music industry, and our own experience of music, has a thumb on the scale in favor of men and masculine genres.

This post borrows heavily from Jacqui Frost at TROT! and you can find links to the original research there.

This post has as much rhetorical hand-waving as you average upper-level undergraduate term paper.

Many publications didn't review her album? The sum total of publications that the author points to without a review of 1989 = 1. n=1, as an argument, would be thrown out of any publication. Instead, see the critical acclaim that the album did earn:
http://www.metacritic.com/music/1989/taylor-swift/critic-reviews

Never forget the added-value of irony in this hipster generation.

No mention of Theodor Adorno and popular music?

Hmmm? I think maybe the reason this got a lot of attention is because everyone knows that Taylor Swift's album was an awesome pop album, and Ryan Adams is a sometimes soulful but often ponderous prat who covered *the entire album* and made it more lugubrious and precious than anyone could ever imagine. Yes, there's a gender dimension to the way this played out, but if Karen O or Sleater-Kinney had made a moody cover of Daft Punk's entire album Random Access Memories, the same questions of appropriation would apply. I think it would be far more interesting, however, if it turned out that Daft Punk were, in fact, Karen O and Corin Tucker in disguise.

You can't more "serious" and over-wrought than Robert Christgau. And he gave it an A-, with this review:

"The NYC tourist jingle everybody hates on to prove they're not her
shills is my favorite thing here. Having emigrated to Manhattan myself,
albeit from Queens, I think it's silly to demand sociology from someone
who can't stroll Central Park without bodyguards. I note that even from a
limo you can tell that the "everyone" here who "was someone else
before" includes many immigrants of color. And I credit its gay-curious
moment even if she ends up with a banker like her dad. All that said,
however, there's a big difference between Swift's Manhattan and the one I
can afford only due to real estate laws as vestigial as the family
grocery that just closed up across the street, and you can hear that
difference in the music. In principle I'm down with the treated hooks
and doctored vocals with which Swift makes herself at home. Freed of
Nashville's myth of the natural, she echoes and double-tracks and backs
herself up, confides with soft-edged subtlety and fuses the breathy with
the guttural. But I have less use for the cyborg with feelings she's
playing now than for the gawky 15-year-old she created on Fearless--the
one who was a hundredth as talented and a tenth as self-possessed as the
18-year-old who imagined her, the one who gathered an audience of
country fangirls Nashville didn't know existed. That fifteen-year-old
obviously isn't much like me. But she's more like I was when I got here
than the cyborg will ever be, or most bankers either. A-"

[…] So says Prof. Lisa Wade over at Sociological Images. […]