Unemployment can change your race

In the 6-minute video below, Stanford sociologist Aliya Saperstein discusses her research showing that the perception of other peoples’ race is shaped by what we know about them. She uses data collected through a series of in-person interviews in which interviewers sit down with respondents several times over many years, learn about what’s happened and, among other things, make a judgment call as to their race. You may be surprised how often racial designations. In one of her samples, 20% of respondents were inconsistently identified, meaning that they were given different racial classifications by different interviewers at least once.

Saperstein found that a person judged as white in an early interview was more likely to be marked as black in a later interview if they experienced a life event that is stereotypically associated with blackness, like imprisonment or unemployment.

She and some colleagues also did an experiment, asking subjects to indicate whether people with black, white, and ambiguous faces dressed in a suit or a blue work shirt were white or black. Tracing their mouse paths, it was clear that the same face in a suit was more easily categorized as white than the one in a work shirt. 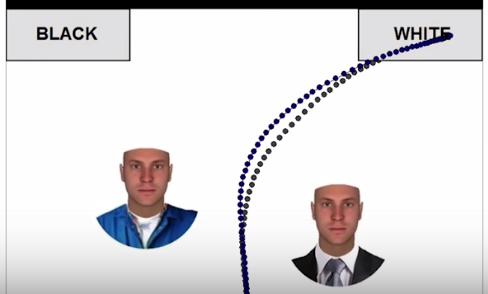 Race is a social construction, not just in the sense that we made it up, but in that it’s flexible and dependent on status as well as phenotype.

She finishes with the observation that, while phenotype definitely impacts a person’s life chances, we also need to be aware that differences in education, income, and imprisonment reflect not only bias against phenotype, but the fact that success begets whiteness. And vice versa.

To be honest I really don't understand how race really affects some and benefits others. I understand that white people seem not to have a problem when it comes to race, as of black people who have struggled because of it since the creation of the United States. Where I come from there is no such thing as race, and if there is it definitely does not divide people. It gets one mad to see that skin complexion can define someone to the point where can be put under a category that might not define the person at all. Unemployment can change your race? According to Sociologist Aliya Saperstein it happens but I have to disagree. She mentions that "a person judged as white in an early interview was more likely to be marked as black in a later interview if they experienced a life event that is stereotypically associated with blackness, like imprisonment or unemployment." Why do only black people have to be associated with such stereotypes? And why do white feel to be black just because they have experienced unemployment or been in prison? Why can't they just be white people who have been in such circumstances? Besides since when color become race? Maybe I am a complete ignorant when talking about race involving white and black but I honestly can't understand it.

I would bet similar results could be found if people were asked to judge an objective statement such as "Was this person born in Mexico?" In other words, I offer the alternative hypothesis that this has little to do with social construction and more to do with how people use evidence to reach conclusions.

It would be interesting to use this sort of experiment to work out what apriori beliefs people have and how far they differ from reality. For example we could work back to the prior probability people hold that a black person is unemployed.

"This video is private."

The video is marked "private" and can't be viewed

Awesome! thanks for sharing.