Where did Chinese laundries go?

Vintage Ads put up this advertisement in which a collection of “Chinese” bemoan the invention of the compact washer/dryer (text below): 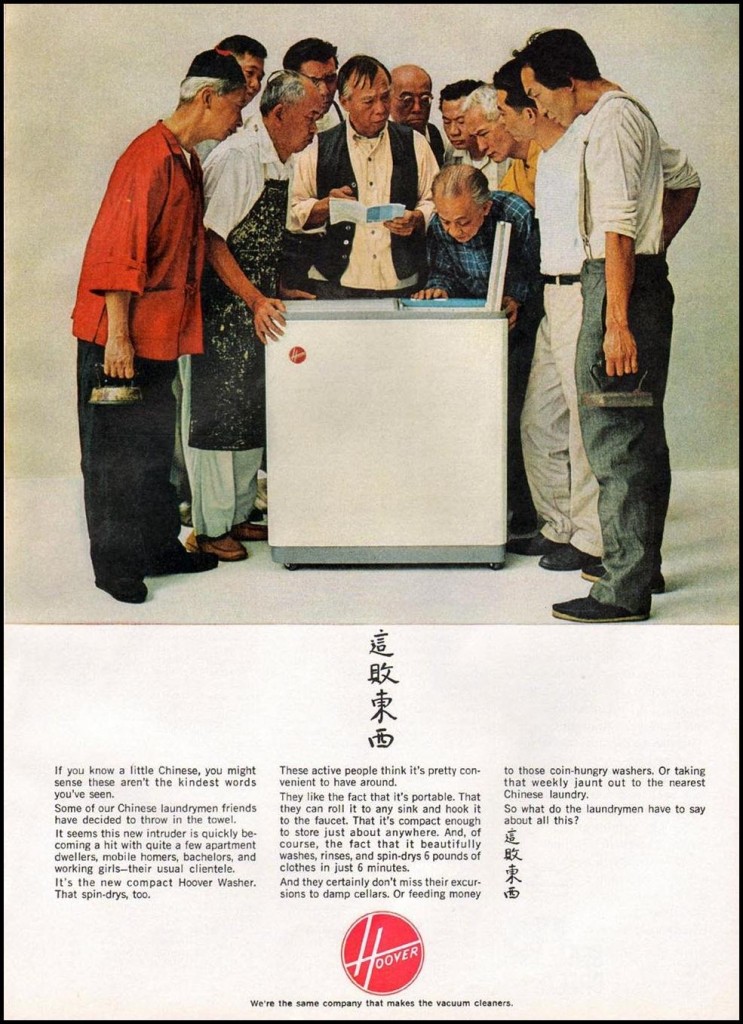 If you know a little Chinese, you might sense these aren’t the kindest words you’ve seen.

Some of our Chinese laundrymen friends have decided to throw in the towel.

It seems this new intruder is quickly becoming a hit with quite a few apartment dwellers, mobile homers, bacherlors, and working girls–their usual clientele.

It’s the new compact Hoover Washer. That spin-drys too.

This stereotype–that Chinese men were professional launderers–is still around today (e.g., the U-Washee laundromat and the shoe company and restuarant called “Chinese Laundry”), but it may be unfamiliar to some.

Many Chinese men ran laundry businesses between the late 19th century and the end of World War II.  They turned to laundry because they were shut out of other types of work (such as mining, fishing, farming, and manufacturing) and didn’t have the English skills or capital to make other choices.  Washing and ironing was considered women’s work, so it was low status and also posed no threat to white, male workers.

Drawing of an 1881 Chinese laundry in San Francisco (source): 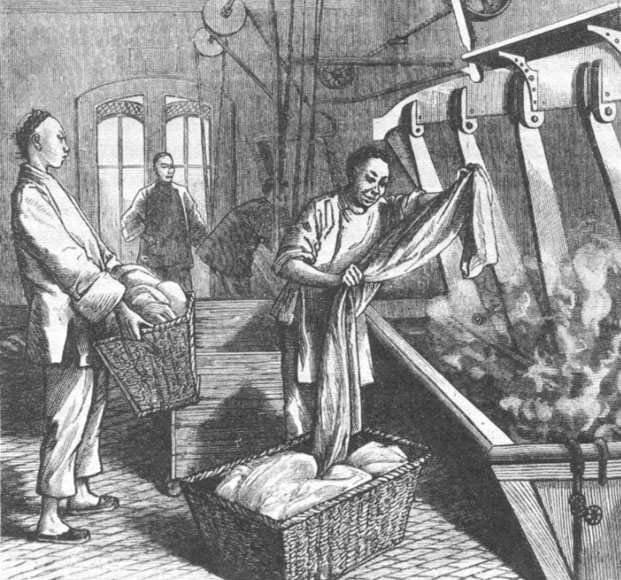 According to sources cited in Wikipedia, “Around 1900, one in four ethnic Chinese men in the U.S. worked in a laundry, typically working 10 to 16 hours a day.”  John Jung, who grew up behind a Chinese laundry and wrote a book about the business, explains that “New York City [alone] had an estimated 3,550 Chinese laundries at the beginning of the Great Depression of the 1930s.”

As the vintage ad suggests, the Chinese laundry disappeared into history not because discrimination disappeared, but because of technological innovation.

What *does* that say in Chinese?

The British Navy has a tradition of recruiting Hong Kong chinese to work as laundrymen on their ships.

Chinese laundry's were also the subject of an important disparate impact court case:

Permits were required to operate a laundry in a wooden building, but not in a brick one. Chinese-owned laundry's were almost always in wooden buildings, so when they came in for a permit, the judge would deny it for Chinese-owned businesses and allow it for white-owned.

You should look up the famous "Ancient Chinese Secret" Calgon ad on YouTube. Among other bizarre elements: the Chinese couple at the center of the ads speak with no accents and are presented as being totally assimilated. But the husband is wearing groovy Western '70s clothing (and has shaggy hair to match) while the wife is wearing a high-collared red patterend dress that looks like "traditional" Chinese clothing (or at least what an ad agency would think of as being traditional Chinese clothing).

Have they really disappeared? Having only once used a laundry in my life, I honestly wouldn't know, but from memory in several Hollywood blockbusters the laundry people were still Chinese (first ones that sprang to mind: "The Sweetest Thing" with Cameron Diaz, Christina Applegate & Selma Blair and "Just My Luck" with Lindsay Lohan; actually I have a hard time thinking of any other laundries in films at all).

Unfortunately this is still very much alive in the UK because of the pantomime of Aladdin, which is set in 'Old Peking'. Aladdin's mother (Widow Twankey - that pantomime's dame) runs the laundry and Aladdin's brother, who takes the stock comic-relief pantomime role, is always called Wishee Washee.

This also shows up in the musical "Thoroughly Modern Millie". The hopeless comic relief characters are a pair of Chinese twins laundrymen.

I used to live in an old brownstone building in Brooklyn that, prior to 1980, had long been been used as a boardinghouse for Chinese laborers. They left many artifacts including an English phrase book meant for Chinese laundrymen published in NY in 1928. This manual included coded tips on how to foil a police inspection of a Chinese Laundry (don't let them think that you sleep in the back!), and how to deal with "rascals" (white teenagers) in your shop.

Today, I live in another part of Brooklyn, around the corner from a true Chinese Laundry. A bright red storefront, with packages of clean laundry wrapped in brown paper. Like Autumn said, the have not vanished from NY, yet!

I'm remembering a few years ago when Abercrombie and Fitch got some public attention for their Chinese-laundryman T-shirt: it showed two cartoon "Chinamen", caricatures with conical hats and pigtails, with the caption "Wong Brothers Laundry Service: Two Wongs can make it white". (A PR person from A&F whined that "We personally thought Asians would love this T-shirt!")

My resident Chinese fellow says it reads 'Zhe bai dongxi' (earlier commenters were mostly correct) or something to the tune of "This failed thing..." He says the phrase is too generic to determine an EXACT meaning but "This darn thing" is pretty close.

My friend was also unaware why a group of Chinese would be cursing a washing machine (interestingly enough, since he is rather well-versed in history.)

When I was a child, many years ago, and we lived in Brooklyn, our laundry was done by a Chinese laundryman. Every Christmas, he would give us a box of lichee nuts.

And today, most of the dry cleaners I use are run by Asians.

"這敗東西" is poorly written and doesn't have any real meaning.

The closest term than I can come up with is "This failed thing", which is in fact opposite of what the ad is trying to suggested.

"As the vintage ad suggests, the Chinese laundry disappeared into history not because discrimination disappeared, but because of technological innovation."

Once Chinese immigrants were firmly entrenched in an industry why would you expect removing discrimination against the Chinese would reduce their presence in that industry? Especially if the industry is owner-operated and there is still discrimination against the job? Chinese Americans might diffuse to other jobs, but I wouldn't expect that to reduce their presence in this one unless they were replaced by more recent immigrant ethnicities as Chinese Americans moved to more prestigious jobs.

I grew up in the 1970s in Central Manchester UK. I have vivid memories of walking down a narrow corridor to collect a laundered bedsheets with my older sister from our Local Chinese Laundry.
The Pristine brown paper packaging and starched items left a significant impression on a young mind.

City could sign SIX new players in the close season, including two new full-backs and at least one centre-back, and Kompany appears to have no future.

my first job was in a chinese laundry. I was 13. Good times.

I love this article and all comments.

How about this thought?? I grew up in a Chinese laundry and also had friends and cousins in the same situation. Our parents did not want us to grow up into their businesses and instead, worked hard to send all of their kids to school to escape this outcome. Most of the kids that I knew went to college and learned some other vocation and virtually all did not go into the laundry business.