The one-year anniversary of Eric Garner’s death passed a little more than a year ago. Before Garner’s death, I had never heard of Tompkinsville, the Staten Island neighborhood where Garner regularly hung out, near the busy intersection of Victory Boulevard and Bay Street.

This was Garner’s spot.  He played checkers and chess there, bought kids ice cream, earned the reputation of a “peacemaker” among his peers, and, yes, routinely sold untaxed “loose” cigarettes.

This was also the spot were Eric Garner was died.

Over the past year, despite the substantial media attention devoted to Garner’s death and the subsequent grand jury inquiry into the responsibility for his death, I didn’t hear or read much about Tompkinsville.

The lack of attention to the neighborhood in which Garner lived and died is strange given that the NYPD’s initial encounter with Garner was ostensibly motivated by the Broken Windows theory of crime causation.  According to the theory, “disorder” in any given neighborhood, if “left unchecked,” will result in ever greater levels of disorder, which, in turn, will ultimately result in higher rates of serious crime.  This is the justification for approaching and penalizing people like Garner who are engaged in non-violent, misdemeanors.

Based on my own research in Jersey City, New Jersey (approximately six miles, as the crow flies, from Tompkinsville), I’ve come to the conclusion that Broken Windows is more of a slogan than a theory and, when it comes down to it, morally and empirically wrong. As I wrote at City Limits:

The question that begs addressing is why the police or anyone else should ever aggressively police the likes of people who not only are “down and out,” but are doing nothing to directly harm others? Why create a situation of humiliation, tension, and hostility—the very kind of situation that led to Garner’s death—unless it is truly necessary? If only in one in a thousand instances, the circumstances are such that in such degrading and antagonistic encounters they result in death or serious injury, is that not one time too many? Or if all that results is humiliation and hostility, don’t these costs alone outweigh whatever benefits might conceivably come from cracking down on offenses like selling loosies?

In the three years of ethnographic work I did in Jersey City, I saw plenty of disorder, but this didn’t translate into serious crime:

Much as many people may not like who or what they see in the square, it is undoubtedly a safe space. I know this from experience and it is also borne out in the city’s official crime statistics.

Of course, one case doesn’t definitively show that high disorder never leads to high crime, but it does suggest that it doesn’t necessarily do so.  In any case, there has been no definitive science supporting the Broken Windows theory.

On the same logic, the case of Tompkinsville further undermines the theory that disorder leads to serious crime. According to official data, rates of serious crime in and around Tompkinsville have long been relatively low, even during the years when the NYPD was not employing the Broken Windows strategy.  This suggests that, however “disorderly” Tompkinsville may have been at times, the recent implementation of Broken Windows was, and remains, a solution in search of a problem.

Upon realizing the possibility that Tompkinsville might be another example of a high disorder/low crime space, I decided it was time to visit the neighborhood.  I made the trip twice and I did not encounter what appeared to me to be a dangerous neighborhood or a neighborhood on the verge of becoming dangerous anytime soon.

Here is the part of town where Garner lived out his days: 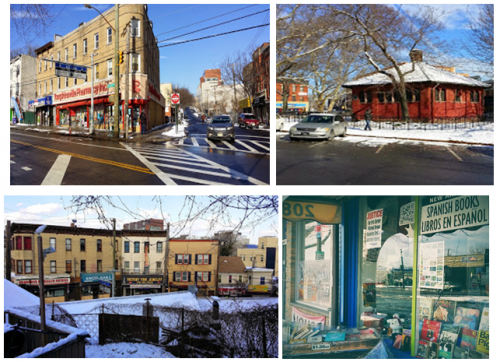 While this part of town didn’t strike me as “bad,” it is a far cry from the Tompkinsville that sits just a short walk away, separated only by a concrete path. Much of Tompkinsville is actually rather well-to-do: 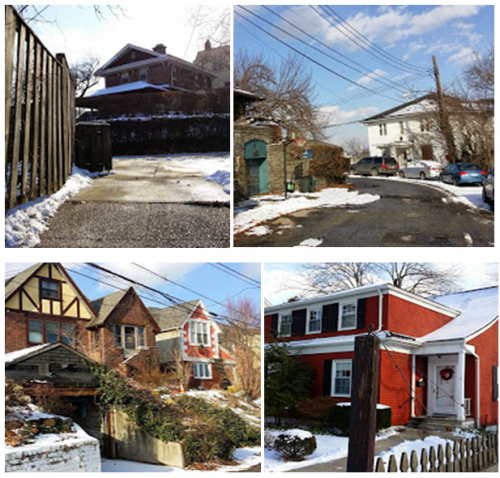 The socioeconomic disparity on display in Tompkinsville illustrates how policing and punishment are but one part of a much larger, far more complex, and deeply-rooted equation of inequality in America. Perhaps if Garner’s part of the neighborhood had been farther from the kind of real estate that developers and wealthy residents value, a little disorder would have been a little more tolerable.

I’m more convinced than ever that Garner’s death was a gross injustice and the consequence, not just of the actions of a single individual, but of a deeply misguided policy and theory. As Jesse Myerson and Mychal Denzel Smith poignantly argued in The Nation (in the wake of a grand jury’s decision not to indict the officer whose chokehold certainly, at the very least, served as the but-for cause of Garner’s death), neither black lives, nor many other lives besides, will likely matter much unless, in addition to urgently-needed criminal justice reforms, something is done to seriously address the roots of poverty and inequality in America.

Mike Rowan is an assistant professor in the Sociology Department at John Jay College. His book in progress examines how a population of chronically homeless, jobless men and women were policed in a neighborhood of Jersey City. Dr. Rowan is also a member of the Executive Board for the Hudson County Alliance to End Homelessness, the director of the CUNY Service Corps’ Homeless Outreach and Advocacy Project, and a contributor to the Punishment to Public Health Initiative at John Jay.

"This was also the spot were Eric Garner was died."

just wanted to point that out

"Perhaps if Garner’s part of the neighborhood had been farther from the kind of real estate that developers and wealthy residents value, a little disorder would have been a little more tolerable."

Perhaps if you're an assistant professor and you don't live in a neighborhood where gunshots are a regular occurrence, the "broken window theory" is a just a theory, and not something you actually have to think about in your own community. Perhaps if bullets were flying through your window, you'd WANT police to increase patrols and crack down on crime of any kind. Perhaps this Mike Rowan is an ivory-tower intellectual who has never been shot at, and for him, this whole discussion about violent crime and law enforcement is some hypothetical thought experiment.

>The socioeconomic disparity on display in Tompkinsville illustrates how policing and punishment are but one part of a much larger, far more complex, and deeply-rooted equation of inequality in America.

Why are you talking about an "equation of inequality" when there are groups of men who open fire indiscriminately on apartment complexes inhabited by innocent people, including children and newborn babies? I've seen this happen, and I can tell you, when the rounds are cracking through the air, I'm not thinking about the "equation of inequality". I'm thinking about how the police need to crack down on these pieces of shit who have no regard for human life.

The first step is enforcing the law. If the law is enforced more harshly in areas like Eric Garner's, there is a good reason for it. That reason is: it NEEDS to be enforced more harshly in a neighborhood where shootings are commonplace. To say that the law should be applied equally harshly in upper-class neighborhoods is completely absurd. To throw up your hands and say "the only way to fix this is by completely altering our current economic system, so there's absolutely nothing we can do about it until then" is equally absurd. I don't see full communism being implemented any time soon, so we have to deal with these criminal elements in the only way that is currently feasible: increased law enforcement.

This arrest was about enforcing the city's revenue generating regulatory regime. It has nothing to do with the broken windows approach to lowering violent crime. (That's why so many traditionally "law and order" conservatives immediately denounced it.)

There are plenty of examples, which are actually on point, to form an honest debate around the cost v. benefit of the broken windows approach; however, the Garner case is so far off point that its choice seems willfully ignorant.

This is just one case of thousands that happen everyday. Racial profiling and heavy policing directed towards minorities is commonplace in most cities. I am not sure if this was an example of the "Broken Window" but I will be researching that for future reference.