Is New Orleans undergoing a revival?

Generally, residents of New Orleans are “remarkably optimistic” about its recovery and future. Partly because the city had just begun to recover from Hurricane Katrina when the Great Recession began, it suffered less job loss relative to its pre-recession state and GDP actually grew 3.9% between 2008 and 2011. No other southern metropolitan area cracked 2% in the same period.

Richard Webster, writing for nola.com, offers the following evidence of New Orleans’ resilience in the face of the Great Recession. Chart 1 shows that it lost a smaller percentage of its jobs than the U.S. as a whole. 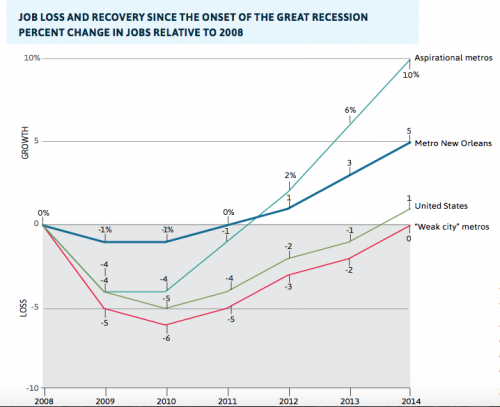 This is even more significant as it looks, as New Orleans had been in economic decline for decades before Katrina. At EconSouth, Charles Davidson reports that “the economy in New Orleans has reversed decades of decline and outperformed the nation and other southern metropolitan areas. Consider: the job growth in New Orleans shown in Chart 2 may not look impressive, but compare it to the declines of its neighbors (blue is before Katrina, green is after). 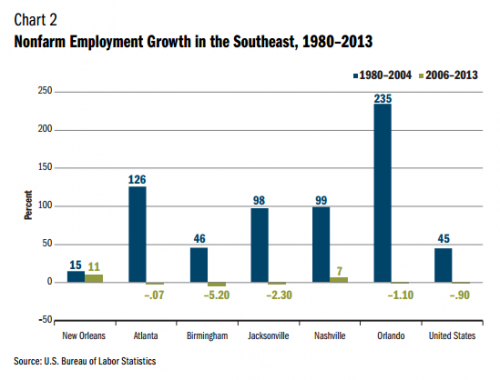 Residents seem to feel that the city is doing well, with the stark exception of fear of crime. But white residents are much happier with the state of the city than the 60% of residents who identifies as African American (image via NPR). This likely reflects the widening wealth gap in the city post-Katrina. 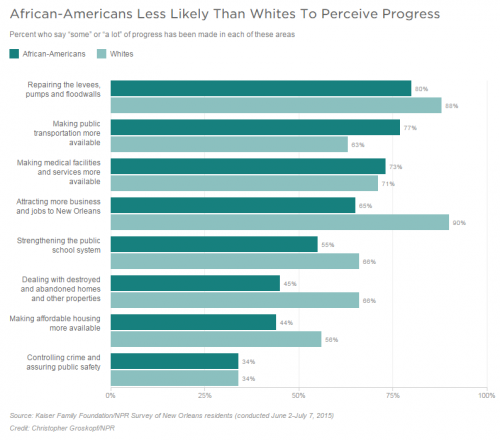 New Orleans continues to face serious problems, including low wages, a widening wealth gap, an evisceration of the public schooling system, underfunded higher ed, high crime, negative effects of gentrification, and the looming threat of another storm. Still, thanks to greater diversification of its economy, entrepreneurship, record tourism, and rising investment money, many are arguing that the city is in the midst of a revival.

And then it will flood again, and the response will cost us all a fortune and be executed imperfectly, and there will suffering and lives ruined, and fingers will be pointed in every direction, but rebuild we must to satisfy the economic interest of the landowner, and so the cycle continues.