The NYC subway to a person using a wheelchair

The Americans with Disabilities Act turned 25 years old last month. It was enacted by U.S. Congress with the goal of ensuring that people with disabilities had access to “reasonable accommodations” so that they could participate wholly in public life.

Did it work? Consider the New York City subway. SupraStructure featured these two maps. The one on the left is the NYC subway map of the 490 stations in the system; on the right is the accessible subway map, including only the 100 or so accessible stops: 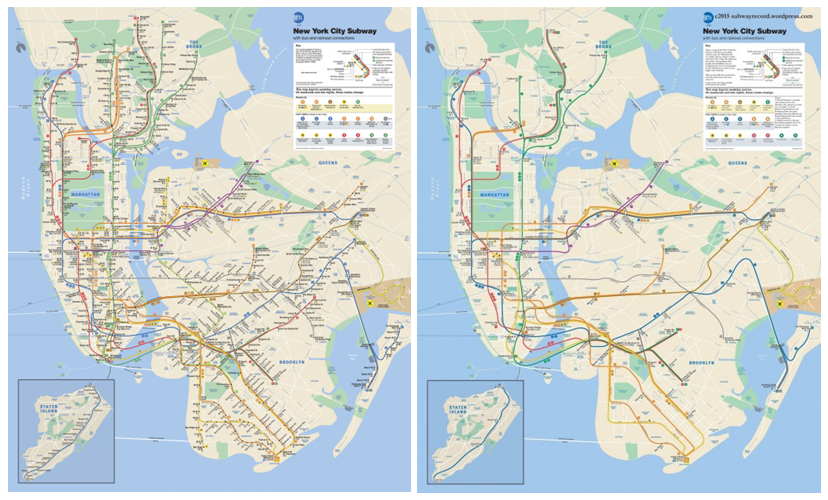 “Essentially the NYC subway system is useless if you use a wheelchair,” writes Bad Cripple about the map. He continues:

Access to mass transportation for a person such as myself that uses a wheelchair is routinely difficult in the extreme. … Wheelchair lifts on buses are somehow broken or the drivers refuse to use the lift often claiming ignorance. Accessible taxis are as rare as diamonds in many cities. Subways in the vast majority of cities are grossly inaccessible. Rental car companies often do not have the car with hand controls rented weeks or days in advance. Shuttle buses at airports are not always accessible. Hotel shuttle buses are also typically not accessible.

He adds that discount travel is “pure folly” and that newer options like AirBnB and Uber seem to have no interest in accommodating people with disabilities. Not to mention the many places he travels that have broken lifts, elevators, and strangely non-accessible “accessible” accommodations.

As with much civil rights legislation, passing the ADA was just the first step in gaining equality. People have often had to sue piecemeal to get accessibility. A person identifies a restaurant without accessible bathrooms, for example, and begins legal proceedings to force the business to comply.  Slowly, little by little — thanks to lawsuits, building codes, and other means — the world is becoming more accessible, though not nearly as quickly as people with disabilities need it to.

> newer options like AirBnB and Uber seem to have no interest in accommodating people with disabilities.

And then there are the things ADA doesn't cover. Though a percentage of post-ADA apartments are required to be accessible, the same is not true of single family dwellings. So for them, generally nothing's changed.

A few years ago, my parents bought a pre-new house (that is, a house that was still in the process of becoming ready). In my wheelchair, I joined them and the builder/developer for the final walk-through, the chair usefully providing a different perspective.
I was frustrated that, like a lot of them, the door of the main bath was too small for my wheelchair, especially because there was more than enough space. The builder addressed me on just that, how us putting one in could be. Turned it back around on him: it would have been easier and cheaper to have been built that way. He said he'd never thought about it and never heard talk about it in the industry. I explained the benefits of building houses to be (minimally) accessible. How just a little change -- an entrance without a step and bathrooms a wheelchair can get into -- would open up his houses to numerous woefully under-served demographics (some I listed). That it's a real pity if there's not talk about it.

The builder really did seem to be listening. Apparently I opened up a whole new world to him and it got him thinking. He's pretty big in the area and has started work on at least three new developments since then. Fingers crossed that he's decided to make some truly minor changes on a couple of blueprints. And hopefully passed along some of the info to others. Because when there's no real reason for something to be inaccessible, it's ridiculous to not make it accessible.

[…] much impact on the New York subway system. After the anniversary of ADA rolled around this summer, a number of compelling posts about the flaws in the act included links to an interesting map drawn by Matthew Ahn, a New […]

[…] much impact on the New York subway system. After the anniversary of ADA rolled around this summer, a number of compelling posts about the flaws in the act included links to an interesting map drawn by Matthew Ahn, a New […]