The margin of error is getting more attention than usual in the news. That’s not saying much since it’s usually a tiny footnote, like those rapidly muttered disclaimers in TV ads (“Offer not good mumble mumble more than four hours mumble mumble and Canada”). Recent headlines proclaim, “Trump leads Bush…” A paragraph or two in, the story will report that in the recent poll Trump got 18% and Bush 15%.  That difference is well within the margin of error, but you have to listen closely to hear that. Most people usually don’t want to know about uncertainty and ambiguity.

What’s bringing uncertainty out of the closest now is the upcoming Republican presidential debate. The Fox-CNN-GOP axis has decided to split the field of presidential candidates in two based on their showing in the polls. The top ten will be in the main event. All other candidates – currently Jindal, Santorum, Fiorina, et al. – will be relegated to the children’s table, i.e., a second debate a month later and at the very unprime hour of 5 p.m.

But is Rick Perry’s 4% in a recent poll (419 likely GOP voters) really in a different class than Bobby Jindal’s 25? The margin of error that CNN announced in that survey was a confidence interval of  +/- 5.  Here’s the box score. 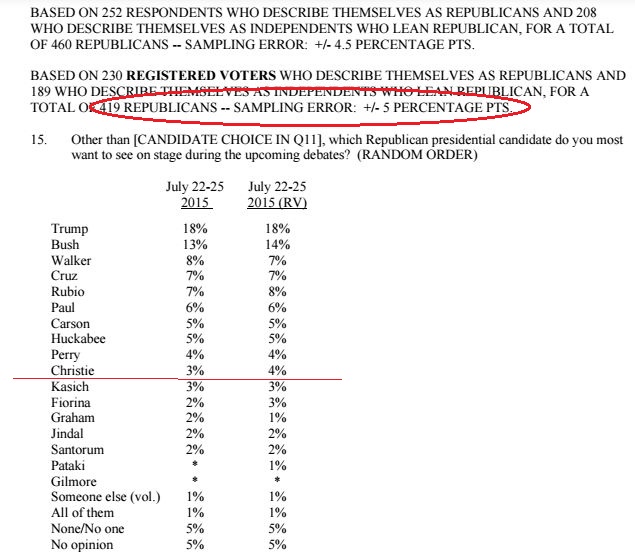 Jindal might argue that, with a margin of error of 5 points, his 2% might actually be as high as 7%, which would put him in the top tier.He might argue that, but he shouldn’t.  Downplaying the margin of error makes a poll result seem more precise than it really is, but using that one-interval-fits-all number of five points understates the precision. That’s because the margin of error depends on the percent that a candidate gets. The confidence interval is larger for proportions near 50%, smaller for proportions at the extreme.

Just in case you haven’t taken the basic statistics course, here is the formula.

Polls usually report their margin of error based on the 50% maximum. The media reporting the results then use the one-margin-fits-all assumption – even NPR. Here is their story from May 29 with the headline “The Math Problem Behind Ranking The Top 10 GOP Candidates”:

There’s a big problem with winnowing down the field this way: the lowest-rated people included in the debate might not deserve to be there.

The latest GOP presidential poll, from Quinnipiac, shows just how messy polling can be in a field this big. We’ve put together a chart showing how the candidates stack up against each other among Republican and Republican-leaning voters — and how much their margins of error overlap. 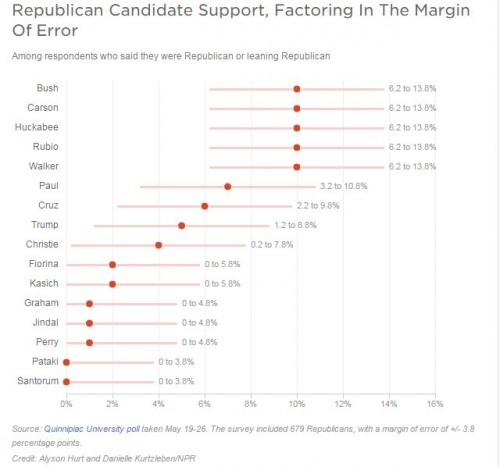 The NPR writer, Danielle Kurtzleben, does mention that “margins might be a little smaller at the low end of the spectrum,” but she creates a graph that ignores that reality.The misinterpretation of presidential polls is nothing new.  But this time that ignorance will determine whether a candidate plays to a larger or smaller TV audience.

* There are slightly different formulas for calculating the margin of error for very low percentages.  The Agresti-Coull formula gives a confidence interval even if there are zero Yes responses. (HT: Andrew Gelman)

Ah, "Who do you want to see on stage at the debate?" is also quite different from what I thought these polls were, which was "Who would you vote for?" A lot of people want to see Trump on stage, but not as many would vote for him (I assume).

Hello there, I need to illuminate you that I love to play Sims 4 and I had gotten an expert right now, know all the techniques and moves everything being equal so I check to use https://www.topratedessayservice.com/edubirdie-com-review/ and manage my task. I loved all the characters of Sims 4, thank you for imparting this news to me.