Not all women: The targets of contemporary drag culture 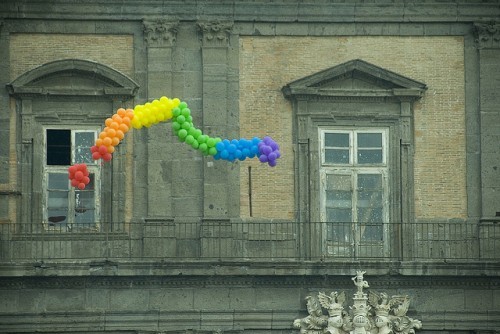 Photo taken at the Napoli Pride Parade in 2010

On Tuesday, Lisa Wade posted a piece, asking some important questions about drag- Is it misogynistic? Should it be allowed in LGBT safe spaces? How can pride organizers enforce drag-free pride events, if such an idea is useful? The good news is that many of these questions are already being asked in some circles. The bad news, is that outside of these circles –where specifics are unknown and the cis experience takes centre stage– such questions can lead to some harmful conclusions.

First some basics. Wade contends that a recent Glasgow Free Pride event “’banned’ drag queens from the event, citing concerns that men dressing up like women is offensive to trans women.” The event didn’t ban drag queens, but rather decided not to have any drag acts perform on their stage, but even this decision has now been reversed. In any case, the initial decision to go without drag performances was not made because of offence caused, as Wade says, but rather because the Trans/Nonbinary Caucus of the event felt that it would “make some of those who were transgender or questioning their gender uncomfortable”. Wade’s misunderstandings seem to come from having used the Daily Beast article on the matter as a source rather than the actual press release from free pride.

The title of Wade’s essay, and the repeated references to “girlface” in the essay itself, not only misunderstood the critiques levelled at drag, but also conflated blackface and drag. This misconception is appropriative of black struggle- it stems from conflation of the two separate histories, one of which was a major tool in the subjugation of black people across America and another which grew as part of queer (then, gay) liberation in a diverse, working class environment, led by women of colour. Comparing the two of them is highly disingenuous.

It is an argument that is about as novel as it is accepting of trans people’s existence. Sheila Jeffries, among many other TERFs, is infamous for using this line of argument to capitalize on the widespread condemnation of blackface in her efforts to attack trans women. Wade is, whether she intends to or not, using this dog whistle in her essay.

Getting a few facts wrong (Which is understandable if you are not part of these conversations. The Daily Beast got it wrong too and this is why allies are usually asked to take a seat in these debates.) and using terminology that is usually reserved for deeply transphobic arguments are somewhat superficial problems that lay on the surface of a much bigger problem: the centering of cis feelings on trans issues. Wade seems to think that the biggest problem, with the Glasgow Free Pride decision is that drag parodies femininity and womanhood.

While this is true in the general sense, drag is understood in the trans community to be oppressive because of the central conceit of the parody: that the performer, while affecting womanhood, is “actually a man.”

It’s about the bulge in the dress, the errant chest hair and the deep voice from the sculpted body. The fact that they’re “always PMSing” is a joke about how they don’t have uteruses. Their stage names, often punning on genitals (“Conchita Wurst”), act to center not their femininity, but the “failure” to produce a cis femininity. This was the drag that the gay media was insisting be reinstated, and that Glasgow Free Pride allowed on their stage again when they reversed their decision.

Drag is not monolithic –both historically and sociologically, different drags have and do exist– which is why Glasgow Free Pride specifically critiques “cis drag” (drag performed by cis people) as making people uncomfortable.

Many of the drag queens of color who led S.T.A.R. and Stonewall were not people who played a woman on stage or in a bar for a few hours a week, but people who lived their lives as women, and their drag is fundamentally different from that of people who perform in televised competition today.

Maybe these drags belong on a pride. Maybe there are decolonised drags which would be welcome. But contemporary western cis drag isn’t about femininity, it’s about the drag queen’s “failures” to produce an impression of cis womanhood, the upshot of which, also produces a caricature of trans womanhood, seen by society as a flawed womanhood.

Given this, it is possible to see drag as an attack on transwomanhood first and foremost, and cis women more as collateral damage in a long controversy within LGBTQIA+ communities. Glasgow Free Pride understood this, and this is why the call came from their trans caucus, not their women’s caucus.

Writing a post which centers the debate on cis women while spending a minimal time on trans women derails a conversation that should be about the transmisogyny of contemporary drag. It is an issue which is actively causing damage by perpetuating stereotypes and, yes, making pride parades unwelcoming for trans women and other maab trans people.

Wade should rest assured that the “conversation” she calls for is, actually, happening. It happens in trans communities all the time. It bubbled over into the mainstream for a few days, and trans people lost a safe space in a radical pride alternative in the process. What she’s actually asking is that the conversation become permanently legible to cis women by focusing on the minor issues that effect them, rather than the transmisogyny of drag.

Well, first, an important critique, and good for Wade for posting it without defensive disclaimers.

I agree that the use of the term "girlface" is to be avoided, given it's use in transphobic rhetoric and as you say it's problematic conflation with blackface. I also appreciate the precision in describing the events, and the attention drawn to the original statement which is notably milder than it is presented in the daily beast article.

I think that the position of "derailing" is problematic, however, when one historically oppressed group adds their experience to a critique being raised by another historically oppressed group. If cis women experience oppression from drag, I think that they get to speak to that oppression when it is pertinent to them. Rather than excluding voices, let's welcome each of us - differently situated as we are - adding to the discussion. One of the many problems with TERFs is they present their oppression as cis women as the One True Oppression, and I think this argument fails no matter which group makes the claim (not to discount the particular offensiveness in the case of TERFs of the claim being made to exclude a group compared to which the TERFs are relatively privileged).

The claim of what drag is really "about" I think is incomplete. For a start, it places to my mind too much importance on intent, or at least on a correct reading of the message. I'd hold to the principle that groups who experience a particular message as oppressive should not be corrected by argument to the truth of the message. Rather their experience should be accepted as its own truth. Mainstream cis gay male drag is experienced as old fashioned misogyny by many women, and as such it is in part misogyny. This does not, or should not, diminish, the validity of trans folk's experience of transphobia from the same performance. In fact, as mainstream cis male drag often acts specifically as transmisogyny it can be expected to be experienced as oppressive by women (cis and trans) and by trans folk (across the gender spectrum) even as it is especially focused on transwomen.

To, illustrate, take the PMS "joke", I agree with your reading that it in part is a joke about the "failure" of the performer (and transwomen) to have a uterus, and is also simultaneously an (admitted very tired) joke about the failure of women to be full, rational people (i.e. cis men). I think both women and trans people, and those people who intersect those categories, may fairly speak to the way in which the "joke" oppresses them.

As a gay male - all of this manufactured conflict is ridiculous. My community is so embarrassing.

TERFs is a slur. A misogynistic slur. When will woman push back against the hyper-entitled leaders of this out of control men's rights movement.