Tumblr Threatened My Life: The Problem with Non-Diverse Workforces

SocImages has a Tumblr where all of the posts that pop up here (and more) get re-posted and go all over the internet. And a few days ago it gave me this post.

While I was working on the page, I saw a really interesting example of the kind of thoughtlessness that happens when designers aren’t thinking about all their potential users. Here’s a screenshot of what I encountered; it’s a timeline of all the things that had happened on the page in reverse chronological order, except the very top line, which is the interesting part. It reads: 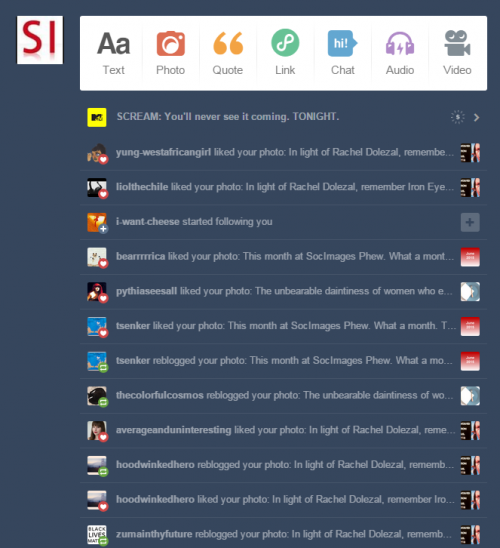 As a female and, more importantly a woman-on-the-internet, my first gut reaction was that I was going to have to forward it to the FBI. You see, it’s an ad for something on MTV — and I realized that in the 2nd second — but, in the 1st second, I thought it was someone threatening to kill me.

I don’t mean to be overly dramatic about this. Even in the 1st second, my reaction was more well, hell than omg I’m gonna die, but I do wonder whether the ad managers at Tumblr or MTV ever considered the possibility that this way of advertising might be genuinely scary to someone, even if just for a second. I wonder if the managing team has anyone on it who is also a woman-on-the-internet. Or anyone who’s job it is to specifically think about the diversity of their users and how different strategies might affect them differently.

One doesn’t have to be routinely subject to threatening comments and messages to have the reaction I did. I could be someone who just left an abusive partner, someone who’s been attacked before, a witness in a criminal trial, a doctor who performs abortions or, christ, a black preacher in the South. Or maybe just someone who doesn’t appreciate an advertisement that, through an intended double meaning, implies that I, personally, am about to be attacked. That’s not funny, or fun, to everyone.

This kind of thing seems to happen all the time. Another example might be the Nikon camera feature, designed to warn you if someone blinked, that thinks Asian people have their eyes closed; the HP face-tracking webcam that can’t see black people; the obsessive health-tracking app that can’t be deleted off your iphone, even if you have an eating disorder; or the fact that it seems to track everything except menstrual cycles, making female-bodied people invisible.

This is one of the arguments for why businesses need diverse staff. Greater diversity — especially if everyone is explicitly given permission to raise issues like these — would make it far more likely that companies could avoid these gaffes and make products better for everyone.

"or the fact that it seems to track everything except menstrual cycles, making female-bodied people invisible."

I'm a female-bodied person and I don't menstruate. Doesn't make a difference though. As a trans person, I was invisible anyway.

So an ad for a horror series 1) caused you to feel actual visceral fear and 2) caused you to write this article that made me aware of a TV show that I otherwise would have no idea existed.

This is just an example of an effective ad doing exactly what it was designed to do. You are supposed to feel fear so you associate this new horror show with the appropriate emotion, so why write an article with the implication that this campaign was some kind of mistake? It's not meant to be a fun or funny ad, it's meant to be scary.

A+ advertiseing work MTV. Great job getting Lisa Wade to do your work for you and amplify the message that SCREAM IS A NEW HORROR SHOW ON MTV.

Spotify used to have a car advert (for Audi) that was SO CREEPY in a similar way. The voice belonged to a well-spoken, middle aged sounding British man (I'm in the UK) and it said "I can see you. I'm watching you right now". It was TERRIFYING. I complained to Spotify who basically said they couldn't do anything about the contents of their ads

Even if you have a diverse workforce, if only certain voices are given any weight, it won't help with cultural sensitivity. If you have a business where half the employees are one ethnicity and half another, but 90% of VPs and above are of one ethnic group, there will be issues. There needs to be an emphasis on diversity also among decision makers.

Diversity might not be the problem here. I am a woman and it never occurred to me to feel threatened by that commercial pitch or therefore to imagine that it would be read as a threat by other women. Do you know the gender of the person who created that campaign or do you just assume that the writer must be male? Having females on the staff by itself will not prevent any message from going out that certain groups or individuals will read differently than those who sent it out intended.

MS Outlook has a few variants. In case you are utilizing a contrary form that doesn't synchronize with your Windows OS, then, at that point, you will notice such mistakes. [pii_email_aef67573025b785e8ee2] Continuously focus on your capacity. You need to erase superfluous information put away in your MS Outlook occasionally. At the point when MS Outlook information stockpiling limit surpasses, then, at that point, it begins showing blunders.