A new survey of 557 female scientists found widespread experiences of discrimination and alienation in the workforce that varied in interesting ways by race. 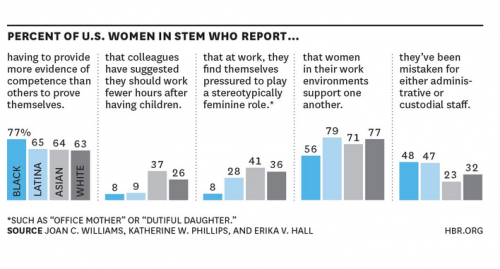 While all types of women reported experiencing these forms of discrimination in large numbers — and 100% of a sub-sample of 60 interviewed for the study reported at least one — the race differences are interesting:

The study, by law professor Joan Williams and two colleagues, can be found here.

[…] Nearly half of black and Latina scientists mistaken for janitors or assistants. […]

[…] Nearly Half of Black and Latina Scientists Mistaken for Janitors or Assistants | Sociological Images: “A new survey of 557 female scientists found widespread experiences of discrimination and alienation in the workforce that varied in interesting ways by race.” […]

Interesting Read: Half of Black, Latina Scientists Mistaken For Janitors, Assistants | Now I ain't saying she a GoalDigger — July 7, 2015

[…] Approximately half of Black and Latina women in the Science, Technology, Engineering, and Math (STEM) fields say they have been mistaken for janitors and administrative staff, according to a new study. […]

But...but how can this be? Both Fox news and various internet intellectuals say that there's no racism in the U.S.!

[…] post originally appeared on Sociological Images, a Pacific Standard partner site, as “Nearly Half of […]

I've been trying to track this study down, but the link to the study leads to a "not found" page at the UC Hastings website. Was this study retracted, or is it still available somewhere?

Karnataka board will release the 2nd PUC result 2021 one month after the conclusion of examinations. Students can check their Karnataka 2nd PUC result 2021 on the board's official results website - karresults.nic.in or from the board's official website - pue.kar.nic.inkarresults.nic.in PUC Result 2021 by providing their "Registration Number". Students can also make use of the direct link given on this page to download their PUC results 2021.