I was on jury duty this week, and the greatest challenge for me was the “David Brooks temptation” to use the experience to expound on the differences in generations and the great changes in culture and character that technology and history have brought.

I did my first tour of duty in the 1970s. Back then you were called for two weeks. Even if you served on a jury, after that trial ended, you went back to the main jury room. If you were lucky, you might be released after a week and a half. Now it’s two days.

What most struck me most this time was the atmosphere in the main room. Now, nobody talks. You’re in a large room with maybe two hundred people, and it’s quieter than a library. Some are reading newspapers or books, but most are on their latops, tablets, and phones. In the 1970s, it wasn’t just that there was no wi-fi, there was no air conditioning. Remember “12 Angry Men”? We’re in the same building. Then, you tried to find others to talk to. Now you try to find a seat near an electric outlet to connect your charger. 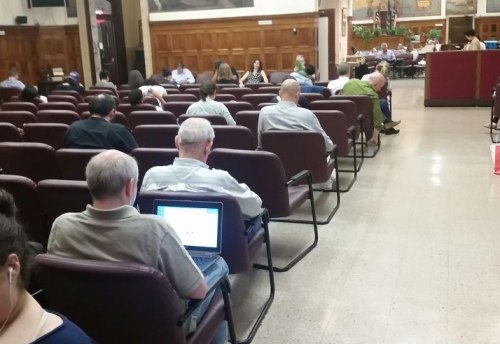 I started to feel nostalgic for the old system. People nowadays – all in their own narrow, solipsistic worlds, nearly incapable of ordinary face-to-face sociability. And so on.

But the explanation was much simpler. It was the two-day hitch. In the old system, social ties didn’t grow from strangers seeking out others in the main jury room. It happened when you went to a courtroom for voir dire. You were called down in groups of forty. The judge sketched out the case, and the lawyers interviewed the prospective jurors. From their questions, you learned more about the case, and you learned about your fellow jurors – neighborhood, occupation, family, education, hobbies. You heard what crimes they’d been a victim of.  When judge called a break for bathroom or lunch or some legal matter, you could find the people you had something in common with. And you could talk with anyone about the case, trying to guess what the trial would bring. If you weren’t selected for the jury, you went back to the main jury room, and you continued the conversations there. You formed a social circle that others could join.

This time, on my first day, there were only two calls for voir dire, the clerk as bingo-master spinning the drum with the name cards and calling out the names one by one. My second day, there were no calls. And that was it. I went home having had no conversations at all with any of my fellow jurors. (A woman seated behind me did say, “Can you watch my laptop for a second?” when she went to the bathroom, but I don’t count that as a conversation.)

I would love to have written 800 words here on how New York character had changed since the 1970s.  No more schmoozing. Instead we have iPads and iPhones and MacBooks destroying New York jury room culture – Apple taking over the Apple. People unable or afraid to talk to one another because of some subtle shift in our morals and manners. Maybe I’d even go for the full Brooks and add a few paragraphs telling you what’s really important in life.

But it was really a change in the structure. New York expanded the jury pool by eliminating most exemptions. Doctors, lawyers, politicians, judges – they all have to show up. As a result, jury service is two days instead of two weeks, and if you actually are called to a trial, once you are rejected for the jury or after the trial is over, you go home.

The old system was sort of like the pre-all-volunteer army. You get called up, and you’re thrown together with many kinds of people you’d never otherwise meet. It takes a chunk of time out of your life, but you wind up with some good stories to tell. Maybe we’ve lost something. But if we have lost valuable experiences, it’s because of a change in the rules, in the structure of how the institution is run, not a because of a change in our culture and character.

I would guess a lot of those people on their laptops and phones are actually trying to telework as much as possible from the jury room. Since you don't get to pick when you're called, sometimes it's a really bad time to miss work. I don't think it's that people are suddenly not as social, but that there's an expectation in the workplace to be connected all the time.

I would not want my jury to bond and be chummy, regardless which side I was on. The more they bond the more they are influenced by others. They become social and lose some of the independence that's needed for the job.

We got better IMO.

I have a feeling this was supposed to not just display jury room norms and shifts in behavior, but social behavior and networking in general. North Eastern America is known as one of the "coldest" place in the states. But why? Is it because people are just meaner here or is it because of the fast paced, productivity oriented atmosphere? To answer this question, i think this article points something out that is very important-- Its not a moral and character decline causing the online obsession; its a complete institutional and system change that has forced most of our interactions to be concentrated in virtual worlds. Heather pointed out one primary example of this when it comes to work obligations, now your not just expected to know whats going on at work when your there, but now there is systemic pressure to know whats going on at work all the time, for the purpose of maximum productivity of course; and in order to do this one must carry t
he duties with them in an online world, so that they can be connected no matter where they are.

And this doesnt just end at work, this goes for the friendships you have and are trying to maintain. Without that online presence its pretty hard to keep up with all your friends in all different areas of your life. Because while we are all connected via internet and social media, we are highly disconnected by the diverse lives each and every one of us lives. we all wear many different hats and are constantly surrounded by different groups of people depending on the hats we wear, its nearly impossible to match all of our lives up.... except on social media. where interests can be grouped and categorized with the click of a finger. Its an interesting time folks.... it really is.