Millennials are No Less Racist than Generation X

One of the important conversations that has began in the wake of Dylann Roof’s racist murder in South Carolina has to do with racism among members of the Millennial generation. We’ve placed a lot of faith in this generation to pull us out of our racist path, but Roof’s actions may help remind us that racism will not go away simply by the passing of time.

In fact, data from the General Social Survey — one of the most trusted social science data sets — suggests that Millennials are failing to make dramatic strides toward a non-racist utopia. Scott Clement, at the Washington Post, shows us the data. Attitudes among white millennials (in green below) are statistically identical to whites in Generation X (yellow) and hardly different from Baby Boomers on most measures (orange). Whites are about as likely as Generation X:

And they’re slightly more likely than white members of Generation X to think that blacks are less intelligent than whites. So much for a Millennial rescue from racism. 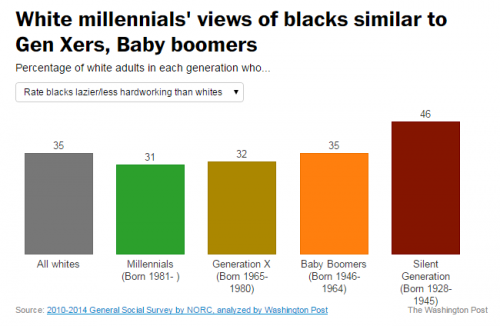 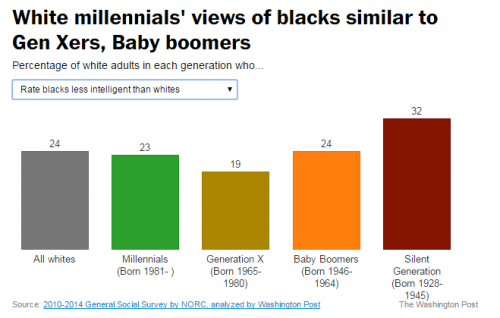 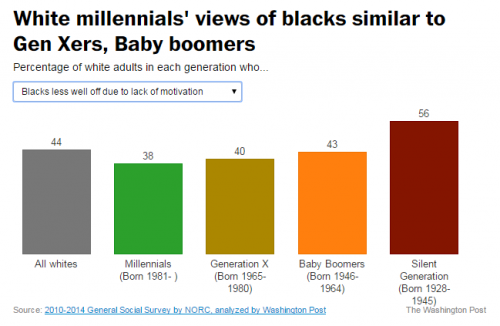 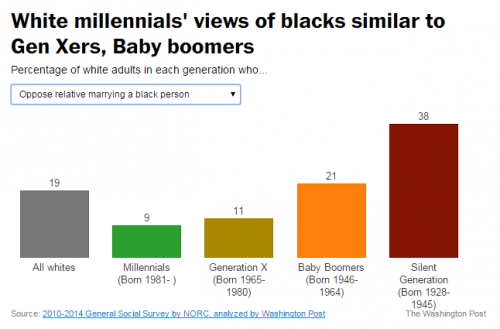 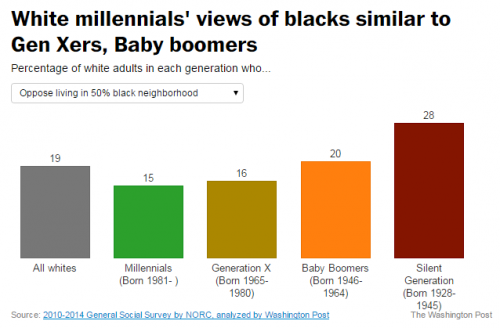 All in all, white millennial attitudes are much more similar to those of older whites than they are to those of their peers of color.

At PBS, Mychal Denzel Smith argues that we are reaping the colorblindness lessons that we’ve sowed. Millennials today may think of themselves as “post-racial,” but they’ve learned none of the skills that would allow them to get there. Smith writes:

Millennials are fluent in colorblindness and diversity, while remaining illiterate in the language of anti-racism.

They know how to claim that they’re not racist, but they don’t know how to recognize when they are and they’re clueless as to how to actually change our society for the better.

So, thanks to the colorblindness discourse, white Millennials are quick to see racism as race-neutral. In one study, for example, 58% of white millennials said they thought that “reverse racism” was as big a problem as racism.

For Millennials, racism is a relic of the past, but what vestiges may still exist are only obstacles if the people affected decide they are. Everyone is equal, they’ve been taught, and therefore everyone has equal opportunity for success. This is the deficiency found in the language of diversity. … Armed with this impotent analysis, Millennials perpetuate false equivalencies, such as affirmative action as a form of discrimination on par with with Jim Crow segregation. And they can do so while not believing themselves racist or supportive of racism.

I believe this review is missing level-of-education as a confounding variable. Uneducated people are likely to be racist. Grouping people by age is easy to do but hides important predictive information about the phenomena and as a result provides little useful information to those who would look to influence racist attitudes.

Given the rising tide of negative messages fed to the African American community -- e.g., education and hard work don't matter (suggesting that they do is now formally a micro-aggression to be avoided according to the official policy of the California university system -- I'm not surprised that progress has stalled in the areas of perceived intelligence and perceived willingness to work hard. (It's one thing when you hear that message from a portion of the population that is clearly suffering from irrational bigotry, but quite another when you hear it from your parents, politicians and society's thought leaders in academia.) If that is the message you're now getting from people you trust, you're simply not going to work hard and you're not going to pursue the academic goals that society uses as a general measure of intelligence unless you are indeed a rare individual.

On a positive note, social messaging does seem to have had a significant impact on the measure, which I think can be most closely linked to hatred -- opposition to a relative marrying a black person. That category exhibits a pretty profound downward trend. Juxtaposed against the stall exhibited in the other categories, it raises questions worth pursuing.

We clearly have a lot more work to do and some serious reevaluation of which social strategies are working and which are failing.

It seems obvious from this data racist attitudes are on the decline. Just from eyeballing the barplots it looks like the change in each attitude fits a negative square root relationship. Yes, the rate of change is decelerating, but that's too be expected as we approach zero. The millennials are statistically indistinguishable from the age group before them, but the long run trend is definitely statistically significant.

[…] with the old folks. As with almost any social theory simple enough to communicate in one sentence, it’s not quite borne out by research. (Also, to the extent that the long arc of the moral universe bends toward justice, it can only do […]

This nonsense about not being able to succeed in America is disgusting to me, it's insulting to my grandparents who came from Cuba to get away from that bastard Castro and who worked their asses off to provide a good life for their kids. Maybe they should have sat on their butts and collected welfare, according to you people minorities can't make it in the U.S. Maybe if you got a real job instead of complaining you would be successful, in fact I'm going to a job interview today because I want to get a better job, instead of complaining how screwed up the U.S. is.

I would expect that many Millenials, particularly if they include young adults in their late teens or early 20's, haven't had to think to hard about race, and are simply parroting the beliefs of their parents. Maybe that's why the Millenials opinions match so closely that of Generation X.

It would be interested to see the results of the same study 20 years from now.

[…] Lisa Wade wrote that, “Millennials are No Less Racist than Generation X.” What do you […]

What about other races, besides white and black? Or about one's own race? Some of my coworkers and acquaintances seem to see nothing wrong with making racist comments about people of their own race (neither white nor black). The comments may be about more innocuous things than in this survey, but they're still racist.

these questions are inherently biased. Next time ask neutral questions and see where the data lies.

Modern Romance and the Glaring Absence of Race - — November 7, 2015

[…] by the research. White millenials in particular have proven time and time again they are not as progressive as they are assumed to be, including in who they choose to date (or exclude from […]