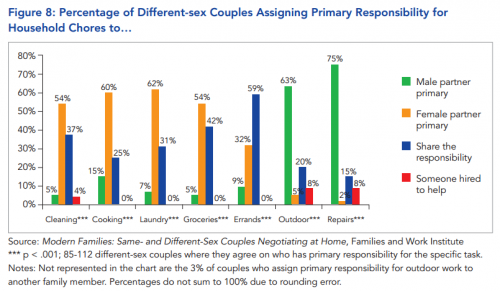 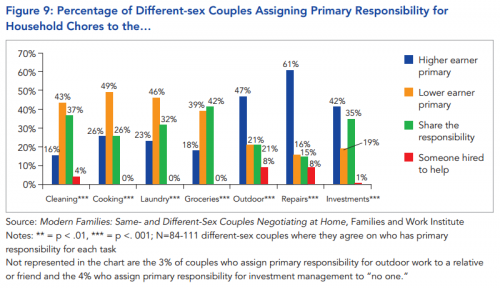 Same-sex couples, though, are no sharing utopia in which everyone does exactly 50% of everything. They are still more likely to divide up household labor than share it — that is, the blue and yellow bars indicating the higher or lower earner, respectively, still dominate the graph. And, interestingly, the gendered nature of the labor is still present in that the lower earner in same-sex couples tends to do the same labor as the female in different-sex couples. 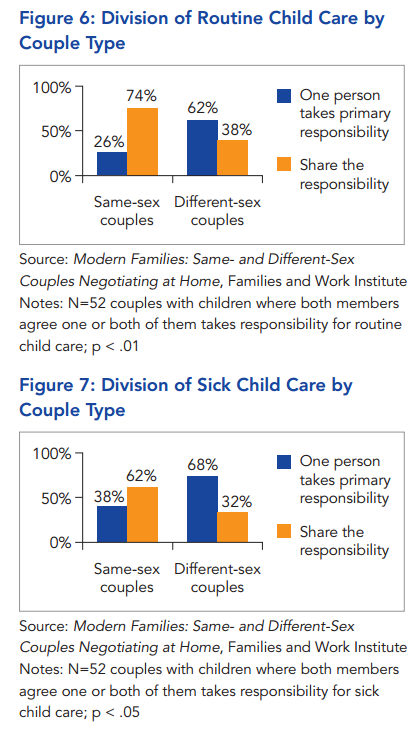 There is no secret recipe, of course, to how a couple should divide their household chores and childcare. There is a take home lesson from the study, though, and that’s to talk about it if you want to. Generally speaking, members of couples who talked about it before moving in together (blue) were more satisfied with their division of labor than members of couples who wanted to have a conversation, but didn’t (yellow). 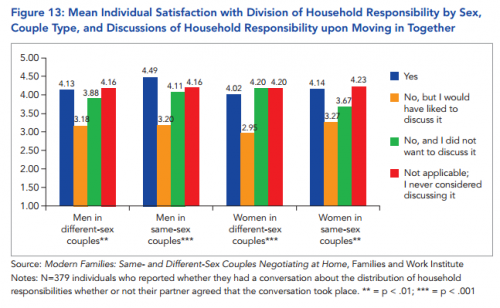 The authors of the study found that women in relationships with men were the most likely of all to say that they wanted to have a conversation, but didn’t (20%). Men in either same- (11%) or different-sex couples (11%) and women in same-sex couples (15%) were less likely to have held their tongue.

The author of the report concludes that it may not be how we divide up labor that matters that drives satisfaction, or even whether we talk about it, but whether we fail to have a conversation that we want.

As evidence for this claim the article then instructs us to "look for the green; that’s the bar that indicates that both people in the couple share responsibility", even though the legend for figure 8 shows that the green bar in the first graph corresponds to "Male partner primary" and neither figure 8 nor 9 represent any data concerning same-sex couples at all (despite the author's assertion that "the first is different-sex couples and the second is same-sex").

Even going back to the original study the closest applicable graph is the one found in figure 10, but that uses completely different categories like Errands and Budget and as such can't be compared to the data in figures 8 and 9. The only categories they share are investments (where the difference in size of the "share the responsibility" bar is an insignificant 2%) and cooking.

So this is an article about a study comparing same- and different-sex couples where there is only a difference in a single category by 9% (in a figure not included in the article proper), and it is in the opposite direction as the conclusion presented in the title.

And those are just the factual errors, I'm not even going to expand on how confusing it is that a sociology PhD decided to reinforce the harmful gender binary by using the phrase "other-sex couples" in the opening sentence when even the study she was referring to used the much more appropriate "different-sex couples".

I have a thesis, just based on experience with others, that same sex couples are more likely to legally separate their financial assets in a marriage. Obviously there hasn't been a lot of time to see how this will actually play out, but still...

What do you think?

suppose an MRA would respond, "because they don't know who the woman is."