Majority of Republicans Now Agree that Being Gay is Morally Acceptable

A Gallup poll of a random sample of Americans conducted in May finds that, for the first time, a majority of Republicans report that they believe that gay and lesbian relations are “morally acceptable.” This is your image of the week: 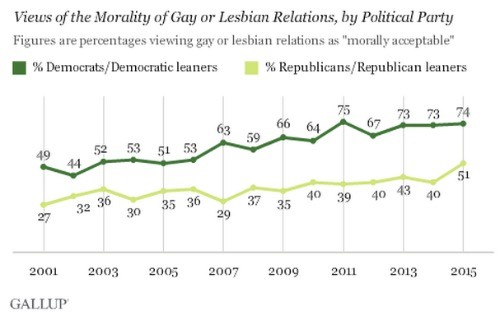 And this, showing that a plurality of Republicans — meaning more than not — think sexual orientation is inborn, not chosen or learned: 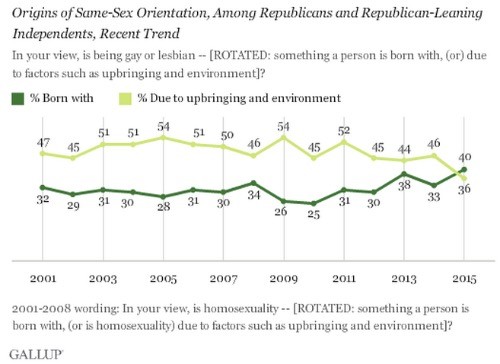 Now, to be fair, Gallup specifies a sampling error of ±4 percentage points. So, they’re 95% confident that at least 47% of Republicans now approve of gayness, but also as many as 55%. Also, I don’t know what “gay and lesbian relations” means — sexual relations? relationships? — and neither do the pollsters or the respondents, as far as I know, which is some interesting slippery question asking. Still, that’s the data. Here’s some skepticism, just in case you’ve got an eyebrow raised.

This is an example of oversimplification by grouping individuals with heterogeneous opinions into a single classification (pun intended).