There is new research from the National Center for Education Statistics (NCES), written up by Susan Dynarsky at the New York Times Upshot. The striking finding is that poor children in the top quartile on high school math scores have a 41% chance of finishing a BA degree by their late twenties — the same chance as children from the second-lowest quartile in math scores who are high-socioeconomic status (SES). Poor children from the third-highest quartile in high school math have graduation about equal to the worst-scoring children form the richest group. Here’s the figure: 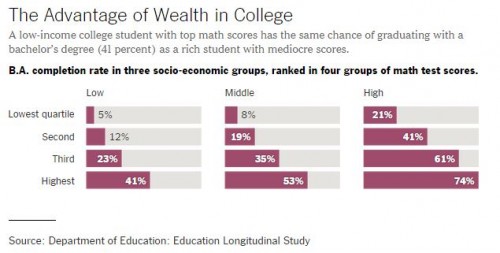 The headline on the figure is misleading, actually, since SES is not measured by wealth, but by a combination of parental education, occupation, and income. (Low here means the bottom quartile of SES, Middle is the 25th to 75th percentile, and High is 75th and up.)

One possible mechanism for the disparity in college completion rates is education expectations. Dynarsky mentions expectations measured in the sophomore year of high school, which was 2002 for this cohort. What she doesn’t mention is how much those expectations changed by senior year. Going to the NCES source for that data (here) I found this chart, which I annotated in red: 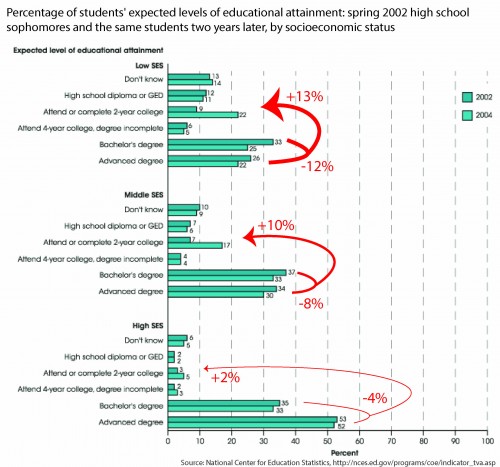 That’s a big crushing of expectations that happened in the formative years at the end of high school.

Philip N. Cohen is a professor of sociology at the University of Maryland, College Park. He writes the blog Family Inequality and is the author of The Family: Diversity, Inequality, and Social Change. You can follow him on Twitter or Facebook.

Interestingly these data change and the authors' explanations are NOT supported in NYC when race/nationality is controlled for, especially with Asians.

As it turns out Asian students from poor families disproportionately aced entrance exams to the Bronx HS of Science and Stuyvesant (the city's most elite) which virtually guarantees admittance to good colleges.

So, at least among Asians, INCOME IS NOT THE ISSUE. And we are left a quandary; either accept that income is less a factor then some people claim or set Asians apart as an aberrant class by itself.

I think the correct approach is to consider income to be a surrogate variable for the real explanation, which involves parental oversight.

Unfortunately for some observers my explanation leads one to conclude that poor American families don't provide as good a level of parental oversight as rich ones, and that's a problem for them.

Social Class Divides the Futures of High School Students is a new study by William Julius Wilson that examines the effects of class on a student's emotional and psychological well-being. Class divisions are most often perceived in terms of good or evil, and not as abstract as a class divided by wealth or educational achievement. In fact, one of the most common events in bestessayforsale.com, the expulsion from the classroom due to behavioral issues, is not based on ability but on behavior. It is not the school's fault that the student cannot behave; it is the child's own fault.

In this regard, Social Class Divides provides a window into how class relates to self-esteem. The book explores how people who belong to different groups or classes relate to each other and what they have in common.

Yeh, I agree with this about the security I was also moving to a different country with my PR visa, the services I use they provided with me the best their services are the best they really help me with my PR visa. I suggest you use this website service called Sunland Education Immigration Consultants.