For every man that earns a college degree, nearly two women will. Women have been outperforming men in college since they started attending in the 1920s, but thanks to widening opportunities, an economy that draws women in the workforce, and simple female ambition, women now outnumber men, too.

New research suggests, however, that the opposite is true for sexual minority men and women. Education researcher Leigh Fine asked whether the college graduation rates of gay, lesbian, and bisexual men and women reflected what we see in general. His respondents were 30 years old, on average — that is, old enough to have passed the age where most Americans complete their education — and they self-identified as non-heterosexual.

In contrast, sexual minority women were the least likely of all four groups to report graduating. 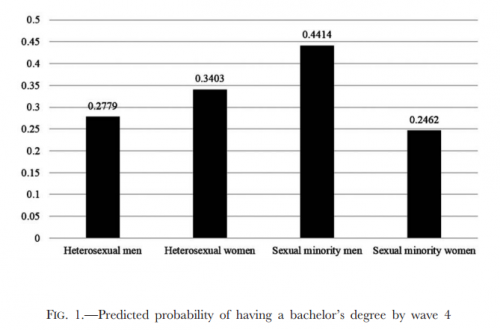 This is another great example of the importance of doing intersectional research. Sociologists use the term intersectionality to draw attention to the way that our identities — our race, gender, class, sexual orientation, immigration status, etc — never influence our lives in isolation from one another. They’re in cahoots. So, being female is one thing, but being a woman who sleeps with women is an entirely different thing, and being such a woman who lives in the country, carries a disability, or is a transnational migrant is entirely another. We’ve got a pretty interesting set of over 300 related posts at our intersectionality tag. Enjoy!

Fascinating finding! Also, the link to the underlying article doesn't seem to work (redirects to the Occidental College Library proxy).

Does everything count though? You mention "our identities" as things that matter and make a difference. But some things seem too transitory to be identities. Immigration status, education, class seem much more changeable for one. Someone might even suffer from some disabilities only temporarily.

From another perspective, we could lump all the "educated" together as an identity. And then what? We could say: The educated are more likely to have well paying jobs than the uneducated. What can we do to make more uneducated people also have jobs?

(missing that, well, educating them might be just the ticket: but that changes their identity! Almost like quantum physics or something)

Part of women's success in school is linked, I believe, to their relative conservatism toward social norms that leaves them more likely to conform to rules set by educational institutions. Gay women might be less likely to conform (they're used to being different) and therefore less likely to succeed in a highly structured social environment like college.

If women both outperform men while in college, and now graduate in greater numbers, wouldn't that suggest that social norms are rigged against men, working to prevent their educational advancement? Is the fact that this question isn't even considered an example of female privilege?

[…] data  that states “WOMEN GRADUATE COLLEGE AT HIGHER RATES THAN MEN… UNLESS THEY’RE GAY.”  For every man that earns a college degree, nearly two women will. Women have been […]