The Relative Importance of Poverty to Catholicism

At the New York Times, Ross Douthat has called out liberals who think, and declare, that churches today are more focused on “culture war” issues like abortion and homosexuality than on poverty.

Ridiculous, says Douthat. Religious organizations spend only “a few hundred million dollars” on pro-life causes and “traditional marriage” but tens of billions on charities, schools, and hospitals. Douthat and his sources, though, lump all spending together rather than separating domestic U.S. budgets from those going to the developing world.  But even in the U.S. and other wealthy countries, abortion and gay marriage are largely legislative and legal matters. Building schools and hospitals and then keeping them running – that takes real money.

Why then do liberals get this impression about the priorities of religious organizations? Douthat blames the media. He doesn’t do a full O’Reilly and accuse the media (liberal, it goes without saying) and others of ganging up in a war on religion, but that’s the subtext.

Anyone who tells you that America’s pastors are obsessed with homosexuality or abortion only hears them through a media filter. You can attend Masses or megachurches for months without having those issues intrude.

Actually, the media do not report on the sermons and homilies of local clergy at all, whether they are urging their flocks to live good lives, become wealthy, help the needy, or oppose gay marriage. Nor is there a data base of these Sunday texts, so we don’t know precisely how much American chuchgoers are hearing about any of these topics. Only a handful of clergy get media coverage, and that coverage focuses on their pronouncements about controversial issues.  As Douthat says, liberals are probably reacting to “religious leaders who make opposition to abortion more of a political priority than publicly-funded antipoverty efforts.”

Of his own Catholic church, Douthat adds, “You can bore yourself to tears reading denominational statements and bishops’ documents (true long before Pope Francis) with a similar result.” Maybe he has done this reading, and maybe he does think that his Church does not let “those issues intrude.” Or as he puts it, “The belief that organized religion is organized around culture war is largely a conceit of the irreligious.”

But here, thanks to the centralized and hierarchical structure of the Church, we can get data that might reveal what the Church is worried about. As Douthat implies, the previous pope (Benedict XVI, the former Joseph Ratzinger), was more concerned about culture-war issues than is the current pope.

How concerned? I went to Lexis-Nexis. I figured that papal pronouncements on these issues would be issued in masses, in official statements, and in addresses.  For each of those three terms, I searched for “Pope Benedict” with four “culture-war” terms (Abortion, Homosexuality, Condom, and Birth control) and Poverty. 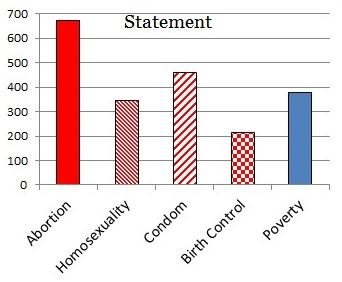 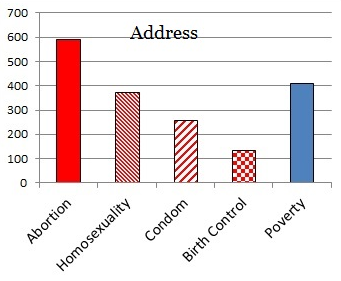 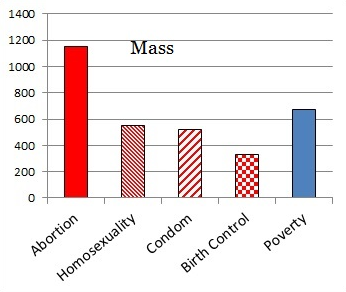 Abortion was the big winner.  Poverty was referred to in more articles than were the other individual culture-war terms.  But if those terms are combined into a single bar, its clear that poverty as a papal concern is dwarfed by the attention to these other issues. The graph below shows the data for “mass.” 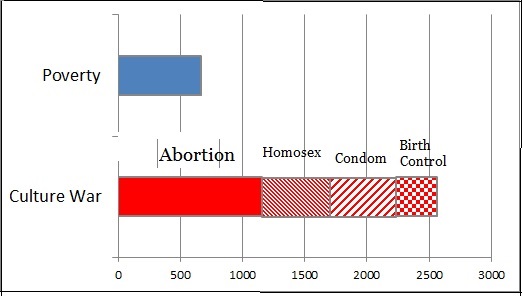 This is not the best data. It might reflect the concerns of the press more than those of the Church. Also, some of those Lexis-Nexis articles are not direct hits. They might reference an “address” or “statement” by someone else. But there’s no reason to think that these off-target citations are skewed towards Abortion and away from Poverty.So it’s completely understandable that liberals, and perhaps non-liberals as well, have the impression that Big Religion has a big concern with matters of sex and reproduction.Cross-posted at Montclair SocioBlog and Pacific Standard.
Jay Livingston is the chair of the Sociology Department at Montclair State University. You can follow him at Montclair SocioBlog or on Twitter.

Liberals do no give money to religious organizations, at least not near the levels that conservatives do.

So religions are more likely to use rhetoric that generates donations from those they expect to reach: conservatives.

But to know what's really important to any religion FOLLOW THE MONEY.

So Douthat is mostly correct, and the Catholic Church pays lip service to conservatives to get their money that it then uses to support charitable initiatives.

See this article on why Charitable Choice and how religious institutions don't provide the best kind of poverty relief, the social capitals they won't bridge, and how little of the money actually goes to charitable causes: http://www.ssireview.org/articles/entry/debunking_charitable_choice

"At the New York Times, Ross Douthat has called out liberals who think, and declare, that churches today are more focused on “culture war” issues like abortion and homosexuality than on poverty.

Notice how he places hospitals on the poverty side of the ledger, when it properly belongs on the anti-abortion side. Catholic hospitals are very "good" at restricting health care, but serving the poor? Not so much:

Douthat makes the claim that religious organizations focus much more of their energies on issues like poverty than culture war issues but that media outlets tend to focus on the later so the public gets a distorted view. In order to try to test this claim, you measure media hits on particular topics. You also note that "Only a handful of clergy get media coverage, and that coverage focuses on their pronouncements about controversial issues" and that your data "might reflect the concerns of the press more than those of the Church. Also, some of those Lexis-Nexis articles are not direct hits. They might reference an “address” or “statement” by someone else. But there’s no reason to think that these off-target citations are skewed towards Abortion and away from Poverty."

Do you not see how problematic all of this is?

There are many kinds of religious, even specifically Catholic, organizations, and I can't imagine trying to figure out how much money/time is spent on different issues. I work for Catholic Charities, and by far nearly all of our programs have a primary goal of poverty reduction. It's a hard thing to really quantify, but for the most part I do think they are good and worthy programs. A number of them are parenting programs that aren't specifically anti-abortion, but provide support for parents who do choose to have children. It's a fine line, because we aren't allowed to talk to clients about reproductive rights, which is unfortunate as it is definitely related to poverty. I think it would be interesting to study this more - it sounds like Douthat is just taking a defensive stance without very clear data.

I'm confused by the "combined into a single bar" graph; it sounds like you just added the previous numbers (so that a Mass containing both "condom" and "birth control" is counted twice), which doesn't really seem meaningful. If so, an easy fix would be to do a new search with an "or" query.

Assuming it's possible to download the whole corpus though, it seems like it might be even more interesting to analyse it using more nuanced "digital humanities" techniques, e.g. latent Dirichlet allocation, that might be able to give a better picture about how much of the time is really spent discussing which issues.

This is not the best data. It might reflect the concerns of the press more than those of the Church.

Which is exactly Douthat's point. The press covers Church discussions of abortion and hot button issues far more than they cover discussions of poverty, thus giving the illusion that the Church is disproportionately concerned with abortion.

Next time, try searching the Vatican's website and not Lexis-Nexis. Otherwise, this data is simply garbage in, garbage out.

i don't think anyone really thinks that religious people sit around constantly thinking about how much they hate the gays. the issue isn't really what percentage of their time they spend being homophobic, it's that their homophobic at all. i was raised in a christian home and went to a christian school, and no, most of the time wasn't devoted to talking about gay marriage or abortion. but hearing even one sermon on how homosexuality is evil was enough to turn me, at least temporarily, into an athiest

i do think liberals misunderstand religion and religious people, and i was actually hoping that this post would address the relationship between poverty and religion, and how some liberals do have this narrow-minded and condescending viewpoint that refuses to acknowledge that religious fundamentalism can be a product of growing up in poverty and if they hadn't been raised in the political and economic environment in which they had been they might not be as tolerant as they are now

religion is not inherently homophobic, and neither are religious people. religion can be used as a force for good, and often has focused on addressing poverty and helping the poor. but that doesn't mean that being religious gives you a get out of jail free card where your homophobia doesn't matter because you think poverty is bad

Good, liberally biased article using roughly ~5 year old data about a previous Pope from a sketchy to non-existent source. Seriously, the data doesn't even have y-axis labels it's that shitty. After reading this I can greatly sympathize with Ross Douthat concerns that liberals may be biasedly attacking religion .