Nazi Racialization of the Jews

Adolf Hitler targeted the Jews in the Holocaust not simply out of hate, but for strategic reasons. Describing his plan to take over Germany, and then Europe, he wrote:

I scanned the revolutionary events of history and… [asked] myself: against which racial element in Germany can I unleash my propaganda of hate with the greatest prospects of success? …I came to the conclusion that a campaign against the Jews would be as popular as it would be successful.

Jews, Hitler figured, were already well hated and, thus, would lend themselves to demonization quite easily.

Once it was decided that the Jews would be targeted, wrote Ronald Berger writes in his essay The “Banality of Evil” Reframed:

the most immediate difficulty that confronted the Nazis was the construction of a legal definition of the target population.

At first, the Nazis defined Jews as non-Aryan. But this became problematic because nations with whom Germany wanted to ally (e.g., Japan) were arguably non-Aryan.

So, the regime settled on a definition that linked non-Aryan-ness to religion. Both racial and religious characteristics could qualify one as “Jewish.”

Like the rules of hypodescent that separated black from white in the U.S. during and after slavery, the Nazis had rules as to what percentage of Jewish blood one needed to have to be truly Jewish. Berger explains that a Jew was defined as a person who was 3/4ths Jewish or more. The term mischling worked like the U.S. word mulatto to identify a person with mixed blood (in this case, someone who was 1/2 Jewish and also was married to a Jew or practiced Judaism).

The next step was measurement. In confusing cases, how could the Nazi’s prove that someone was Jewish or mischling? They developed instruments. These photographs (mine) are from a museum in Munich that has collected some of the instruments used to place a person on the Aryan/non-Aryan spectrum.

An instrument for measuring facial features: 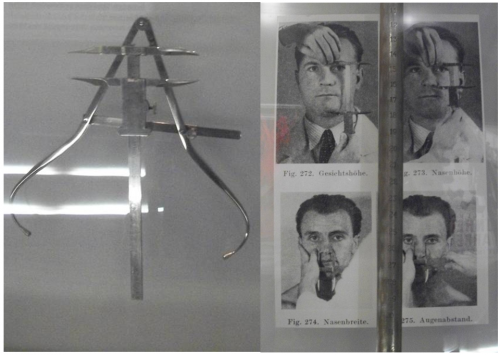 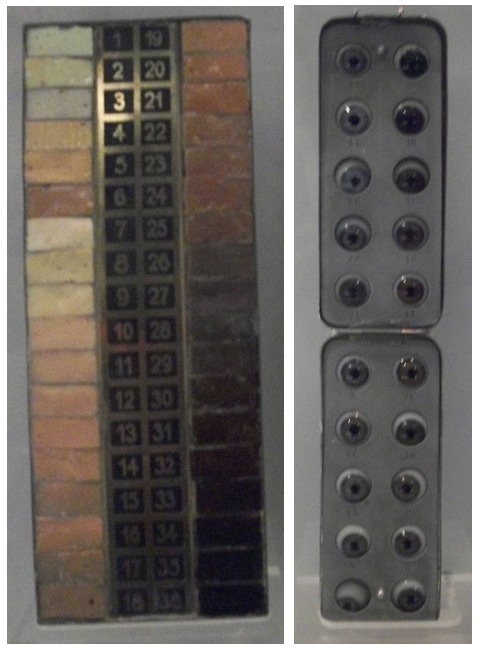 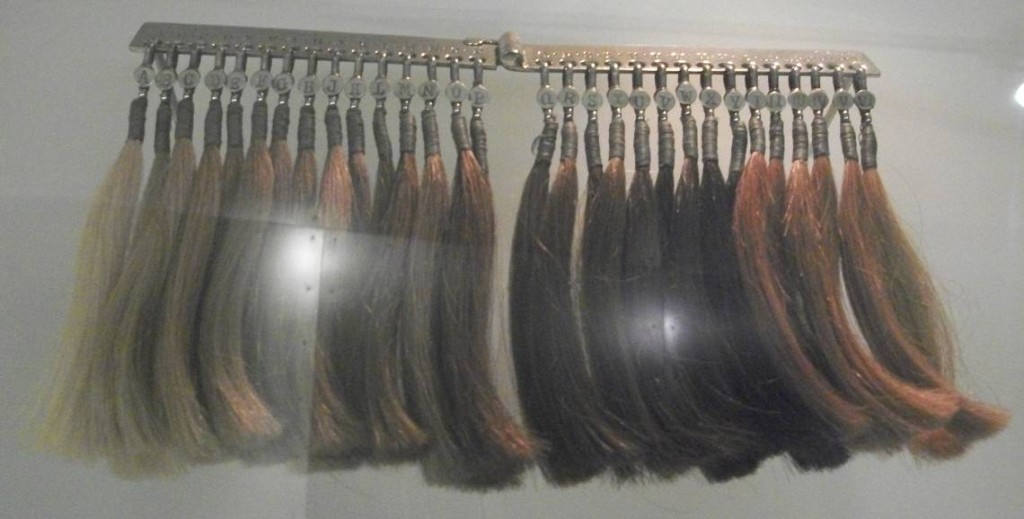 This is just one more example of the way in which racial categories are constantly being invented and reinvented, usually for reasons related to power. For others, see our recent post on the deracialization of Irish dance, the shifting meanings of Creole, and the way Census data collection changed race in an instant.

I would say it is a bit questionable to say that Hitler persecuted Jewish people because of strategic reasons. There is no question that he was a definite anti-semite way earlier than he was involved in politics of any kind. If there was some strategy involved it is not his main reason by far. You cannot state that Jews somehow "naturally" got such treatment because they were an easy group to target.
Also, it should be pointed out that nazi race "science" was highly politically purposeful, as we all know. If they did not like you and you were not a jewish person you'd go to the camps nonetheless.

Much like the concept of race in USA today. It is not really so much about race or real ethnicity but how a person looks superficially. Just like this Obama is a "black" president even though he is half-negroid and half-europid, and half-Kenyan, half- what ever mixed European immigrant ethnicity. Just like nazis yanks see what they want to see in their racial frame of mind.

A question-- were Jewish people always considered a "race" before the rise of Nazism? Because, technically, Judaism is a RELIGION, after all, and religion ain't the same thing as a race.

But these days, I've observed how slowly, but surely the Western media is making a RACE out of Muslims, even though "Muslim" is NOT a race.

where is the Hitler quote from?

From reading Jewish and Christian scripture I have always believed Jews to be a nation (i.e., a people/ethnic group) chosen by a god to be his people.

Race and ethnicity are social constructions. It is a way to divide people into groups and rank them hierarchically. Blacks and whites are as different biologically as Jews and non-jews. It just depends on what trait you want to separate people by. Nose size, the amount of melatonin in one's skin, hair color, eye color. There is more genetic variability within groups than there is between groups. Whether or not people are grouped by religion, skin color, or region just depends on how we decide to define it. And we define it differently throughout history. This conversation is an interesting example of how we socially construct a definition.

Let's not forget the Roma.

"Nazi racialist Hans F. K. Günther added a socioeconomic component to the theory of racial purity. While he conceded that the Romanies were, in fact, descended from Aryans, they were of poorer classes that had mingled with the various “inferior” races they encountered during their wanderings. This, he explained, accounted for their extreme poverty and nomadic lifestyle. While he conceded that there were some groups that were "purely Aryan", most Romanies posed a threat to Aryan homogeneity because of their racial mingling."

And of course, Bohemian Romani -- an aryan language -- is now an extinct.

So, in short, the Nazis targeted an Aryan group of people, who were native speakers of an Aryan language.

I think they had 'the gypsy question' in mind before they bothered with the unconvincing pseudoscience.

I've talked about this same thing in certain other circles, and I'd love to bring the question to you folks here - the idea of the jewish question being a strategy is somewhat controversial because of the intelligence that it credits Hitler with. People feel that by saying he set up this whole strategy, it is also being said that he was a very smart man.
Some would prefer to think that he was just a crazy racist, because (nowadays moreso) people feel that racism is based in ignorance - thus, Hitler's intelligence license is revoked.

I always stir up some mud when I say this, but I side with the strategy side. There's no question that he was absolutely a terrible and evil force in the world, but I feel that for a person to gain as much power as he did in the short time that he did, Hitler had to have been a very intelligent man; at the very least, he has to have been extremely adept at strategy and manipulation.

Personally I absolutely cannot stand when people look at Judaism as a race. It causes extremely problematic and offensive viewpoints and statements. I am Jewish and I have blonde hair and blue eyes and for some reason people look at me as some sort of anomaly. I constantly get remarks like 'but you don't look like a Jew' and then shortly after 'oh yeah I guess you do have a big nose.' I've also heard what I presume are jokes about how I would have been lucky if I had lived in Nazi-occupied territory because I look so 'aryan.'

Being an atheist jew, I like to call myself jew-ish.

Against which racial element in [our nation] can I unleash my propaganda of hate with the greatest prospects of success?

Did anyone else read this and think Muslims in America.

I kind of feel like the ability to direct American fury at Muslims in America got a boost when we were attacked by people waving the flag of Islam - regardless of whether or not they were *actually* acting on their religious beliefs, the perps of the 9/11 attacks pretty much painted a big target on anyone of Middle Eastern descent in the U.S., similar to the way America reacted after the Pearl Harbor attack.
I guess it's a good sign that we didn't set up internment camps this time?

You wrote "When I was in Munich this September, I took these photographs at a museum of the instruments used to place a person along the Aryan/non-Aryan spectrum".

Please tell me the name of this museum and its Email address, and where these instruments, and the statistics obtained from them, are dealt with in detail.

No, the tools shown on the photos were never used to identify Jews. It was simply impossible to reliably identify Jews with racial methods and the Nazis admitted this. The raciologists who worked at the time in Germany (Hans Gunter and others) also admitted that many Jews belonged to the same racial types as Germans did (including the Nordic type). That's why the persecution of the Jews was never racially-based.

Also if the Germans would base their methods on racial and physical appearance, many Jews should be spared of killing which was unacceptable to Hitler.

The tools on the photos at best were used to identify Slavs who were suitable for Germanization.

This article is bullfucking shit once again.

My goodness I am agreed with the German Reich maybe because of the fact. I am a child of the riech but gosh get the cap to fit the egg corn correct! If the brains was a meat loaf don't loaf it into several different shapes of pans! Then yell out we have a thinker here!

I am one-quarter Ashkenazi Jewish and 100% theological Jewish. My mother, who was half ethnic Jewish appeared to be full-blooded. I can remember going to the Kosher meat market and others speaking in Yiddish to her. An old country Jewess who ran the shop with her husband and family, would never let me have a pickled pigs foot she would give me deviled egg instead - and being the little scammer that I was, I was happy with that. My best friend who's full-blooded Ashkenazi Jewish insists that he can see some facial characteristics in me that are characteristic of Hebrew heritage. But, being one-half Anglo-Saxon and one-quarter Irish, the gentiles don't recognize my masked features.Are we a race? Who cares? Can we be distinguished - maybe, sometimes? Ashkenazi are mixed Germanic plus Hebrew - like Chicano-Mexicanos are mixed Spanish plus Aztec Natives. All I know is if I'd been born in Germany before 1935, I would have been classified as a Jew - not part Jewish, but all Jewish.

Western media and western people do NOT think muslim is a race. We know it is a religion. A religion that discriminates against woman, and people who do not believe as they do. And kill, torture & mutilate

i think those nazi fellows were a bit racist

[…] hypodescent has characterized some of the ugliest chapters in human history, the authors of the new paper suggest that such […]

[…] hypodescent has characterised among the ugliest chapters in human historical past, the authors of the brand new paper recommend […]

[…] hypodescent has characterized some of the ugliest chapters in human history, the authors of the new paper suggest that such […]

[…] hypodescent has characterised among the ugliest chapters in human historical past, the authors of the brand new paper recommend […]

[…] hypodescent has characterised among the ugliest chapters in human historical past, the authors of the brand new paper counsel […]

[…] hypodescent has characterised a number of the ugliest chapters in human historical past, the authors of the brand new paper […]

[…] hypodescent has characterised a few of the ugliest chapters in human historical past, the authors of the brand new paper […]

[…] hypodescent has characterised a number of the ugliest chapters in human historical past, the authors of the brand new paper […]