African Americans are less healthy than their white counterparts. There are lots of causes for this: food deserts, lack of access to healthcare, an absence of recreational opportunities in low income neighborhoods, and more. Arguably, these are indirect effects of racist individuals and institutions, leading to the disinvestment in predominantly black neighborhoods and the economic disempowerment of black people.

This post, though, is about a direct relationship between racism and health mediated by stress. Experiencing discrimination has been shown to have both acute and long-term effects on the body. Being discriminated against changes the biometrics that indicate stress and personal reports of stress (anxiety, depression, and anger). Bad health outcomes are the result.

A new study, published in PLOS One, adds another layer to the accumulating evidence. To get a strong measure of “area racism” — the prevalence of racist beliefs in a specific geographic area — epidemiologist David Chae and his colleagues counted how often internet users searched for the “n-word” on Google (ending in -er or -ers, but not -a or -as). This, they argued, is a good measure of the likelihood that an African American will experience discrimination. Here are their findings for area racism: 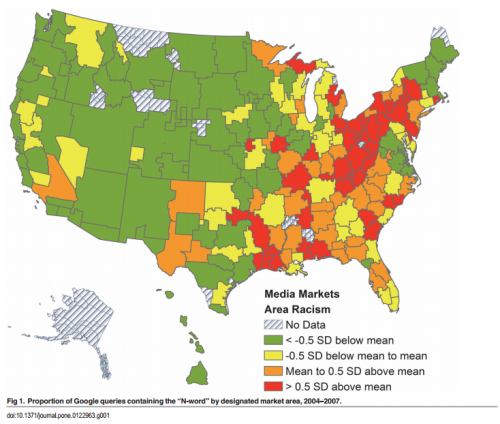 They then measured the rate at which black people over 25 in those areas die and the death rate from the four most common causes of death for that population: heart disease, cancer, stroke, and diabetes. They also included a series of control variables to attempt to isolate the predictive power of area racism.

The resulting data offer support for the idea that area racism increases mortality among African Americans. Chae and his colleagues summarize, saying that areas in which Google searches for the n-word are one standard deviation above the mean have an 8.2% increase in mortality among Blacks. The searches were related, also, to an increase in the rates of cancer, heart disease, and stroke. “This,” they explain, “amounts to over 30,000 [early] deaths among Blacks annually nationwide.”

When they controlled for area level demographics and socioeconomic variables, the magnitude of the effect dropped from 8.2% to 5.7%. But these factors, they argued, “are also influenced by racial prejudice and discrimination and therefore could be on the causal pathway.” In other words, it’s not NOT racism that’s making up that 2.5% difference.

H/t to Philip Cohen for the link. Cross-posted at Pacific Standard.

This is at best an indication in which direction one could develop a research project. The leap from correlation to causation is bad enough, but the way the researchers determined "area racism" is just unacceptable.

These Google search data (whether it be search terms, autocompletes, or ngrams) have by now become my pet peeve. It's just as bad as using "representative samples" of Facebook posts, if not worse. I realise that all that data is tantalizing, but nobody knows how these data are assembled! You don't know anything about the actual body of data that underlies your sample, nor about Google's algorithm, you don't know how Google saves the data and uses it, you use instruments provided to you by a company that is primarily interested in collecting and analyzing these for their own puroposes. If you use such data, you have given a significant portion of control over your study design to a third party.

Apart from that, how does the use of one word in a search engine constitute racism? You don't know anything about the reasons why people search for this, especially since it's just one word. I'm pretty sure that if you looked at the SPLC's google searches, you'd be shocked - and this is just the extreme example. Actually, I'd even speculate that a racist wouldn't need to search for the n-word, because they already know which racist sites to go to. Just because sociologists think they have overcome previous problems with self-reported racism doesn't mean there aren't a host of new problems.

Google is a medium, as is the internet. While it certainly influences our daily life more than other media, its data is still different from "real-world" data. As one can easily see on Facebook and especially Twitter, people behave differently in those spaces, and other social dynamics play out. So to draw a direct line from searches of one specific term (without any context like a sentence) on a search engine that heavily controls its data and is far from transparent, and use them to make far-fetched assumptions about social life is certainly not a "strong measure".

It also doesn't say anything whatsoever about institutional racism.

Blacks have it hard and deserve much better. Our ongoing treatment of blacks is perhaps America's singular lasting stain.

Having said that, this kind of research essentially stands alone in America for its clear lack of rigor. If you really believe its triangulated with other, related studies, what are they and how do they corroborate the finding?

Let's take this up a notch, OK?

A Google search? Really? That qualifies as scholarly research these days? Did David Chae and his colleagues take into account the fact that African Americans frequently tend to use the n-word to refer to themselves and to each other? Might that not be a factor when wondering why one would see more hits in New Orleans than in Phoenix and statistically none in Anchorage?

[…] work to be extracted. It doesn’t take much to conceptualize the fact that racism kills, stresses, ostracizes, warps, and […]