Chris Christie’s net worth (at least $4 million) is 50 times that of the average American. His household income of $700,000 (his wife works in the financial sector) is 13 times the national median.  But he doesn’t think he’s rich.

I don’t consider myself a wealthy man. . . . and I don’t think most people think of me that way.

That’s what he told the Manchester Union-Leader on Monday when he was in New Hampshire running for president.

Of course, being out of touch with reality doesn’t automatically disqualify a politician from the Republican nomination, even at the presidential level, though misreading the perceptions of “most people” may be a liability.

One of those ways, is self-perception.

“If you were asked to use one of four names for your social class, which would you say you belong in: the lower class, the working class, the middle class, or the upper class?”

That question has been part of the General Social Survey since the start in 1972. It’s called “subjective social class.” It stands apart from any objective measures like income or education. If an impoverished person who never got beyond fifth grade says that he’s upper class, that’s what he is, at least on this variable. But he probably wouldn’t say that he’s upper class.

Neither would Chris Christie. But why not?

My guess is that he thinks of himself as “upper middle class,” and since that’s not one of the GSS choices, Christie would say “middle class.”  (Or he’d tell the GSS interviewer where he could stick his lousy survey. The governor prides himself on his blunt and insulting responses to ordinary people who disagree with him.) 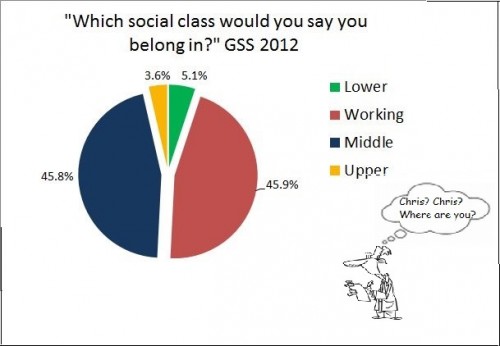 This  self-perception as middle class rather than upper can result from “relative deprivation,” a term suggesting that how you think about yourself depends on who are comparing yourself with.* So while most people would not see the governor as “deprived,” Christie himself travels in grander circles. As he says, “My wife and I . . . are not wealthy by current standards.” The questions is “Which standards?”  If the standards are those of the people whose private jets he flies on, the people he talks with in his pursuit of big campaign donations – the Koch brothers, Ken Langone (founder of Home Depot), Sheldon Adelson, Jerry Jones, hedge fund billionaires, et al. – if those are the people he had in mind when he said, “We don’t have nearly that much money,” he’s right. He’s closer in wealth to you and me and middle America than he is to them.

I also suspect that Christie is thinking of social class not so much as a matter of money as of values and lifestyle – one of  that bunch of ways to define class. To be middle class is to be one of those solid Americans – the people who, in Bill Clinton’s phrase, go to work and pay the bills and raise the kids. Christie can see himself as one of those people. Here’s a fuller version of the quote I excerpted above.

Listen, wealth is defined in a whole bunch of different ways and in the end Mary Pat and I have worked really hard, we have done well over the course of our lives, but, you know, we have four children to raise and a lot of things to do.

He and his wife go to work; if they didn’t, their income would drop considerably. They raise the kids, probably in conventional ways rather than sloughing that job off on nannies and boarding schools as upper-class parents might do. And they pay the bills. Maybe they even feel a slight pinch from those bills. The $100,000 they’re shelling out for two kids in private universities may be a quarter of their disposable income, maybe more. They are living their lives by the standards of “middle-class morality.” Their tastes too are probably in line with those of mainstream America. As with income, the difference between the Christies and the average American is one of degree rather than kind. They prefer the same things; they just have a pricier version. Seats at a football game, albiet in the skyboxes, but still drinking a Coors Light. It’s hard to picture the governor demanding a glass of Haut Brion after a day of skiing on the slopes at Gstaad, chatting with (God forbid) Euorpeans.

Most sociological definitions of social class do not include values and lifestyle, relying on more easily measured variables like income, education, and occupation. But for many people, including the governor, morality and consumer preference may weigh heavily in perceptions and self-perceptions of social class.

My ex-boyfriend always told me he considers himself upper middle class, at the most. He owns seven houses. As someone whose parents will never own even one house, that always struck me as odd, but it's the same phenomenon you are describing. He would compare himself to people who have their own helicopters or own islands and think "I'm not THAT rich, so obviously I'm middle class."

On the other hand, I don't know anyone who would describe themselves as anything other than middle class. My parents consider themselves middle class (perhaps lower middle class) while they've had so much debt they were actually on budget control and they've always lived in public housing.

$4M doesn't seem like much of a net worth when you're making $700,000 each year. Maybe they're giving too much to fund his campaigns? According to the Census Bureau the top 1.5% of households had incomes exceeding $250,000. Maybe only the top 0.12% are rich? They have incomes exceeding $1,600,000 annually. I wonder if large-cap CEO's think they're rich. They average about $11M. I guess you can always point to someone richer. We need other measures of success.

There was an episode of the Cosby Show in which one of the Huxtable daughters was being teased because she was rich. (In the show, the mom, Claire, was a lawyer, and the dad, Cliff, a obstetrician). When the daughter complained to her parents, Claire said, "We aren't rich," to which Cliff replied, "We're not?" And Claire said, "No, we work for our money. Rich people let their money work for them." I always thought that was a good metric.

This is endemic with all big name politicians, even those who happily embrace the image of being progressive. Hillary Clinton recently described herself as not "truly well off" in an interview with the Guardian even though she and Bill had earned (again according to the Guardian) over $100 million since they left the White House in 2001. She also described herself in an interview to Diane Sawyer as "debt broke" immediately after she and Bill had left the White House, but then later (when pressed in an interview with George Ramos on Fusion TV), agreed that her net worth would have been in "the millions".

In the US, we need real leadership--someone who puts America's and its people's interests ahead of those of the selfish interests of the multinational corporations and public unions.

I actually think the graphic above is quite accurate and that people generally know where they stand.

"Income" isn't a great measure of worth (or class) since it fluctuates quite a bit over time and nets-out differently for individuals depending on how it's earned and taxed. So the $700,000 quoted above doesn't tell us much.

But $4 million in net worth for a New Jersey couple approaching their mid-50s does NOT make them rich IMO. Consider: Even if they built it to $6 million in 7-8 years they would not be able to afford retirement in a 1,500 square foot 2-bedroom condo in a luxury Manhattan building. Living the lifestyle-of-rich-and-famous would be completely out of the question.

The Christie's might have the ability to grow their fortune in other ways after the governorship, but for a regular couple those numbers are not rich ones.

[…] “He and his wife go to work; if they didn’t, their income would drop considerably. They raise the kids, probably in conventional ways rather than sloughing that job off on nannies and boarding schools as upper-class parents might do. And they pay the bills. Maybe they even feel a slight pinch from those bills. The $100,000 they’re shelling out for two kids in private universities may be a quarter of their disposable income, maybe more. They are living their lives by the standards of ‘middle-class morality’…Most sociological definitions of social class do not include values and lifestyle, relying on more easily measured variables like income, education, and occupation. But for many people, including the governor, morality and consumer preference may weigh heavily in perceptions and self-perceptions of social class.” – Jay Livingston […]

Let's not forget othering of other classes. The middle class is consistently the class that is marketed to. It's the norm, therefore everyone assumes that they are middle class unless otherwise noted. Working class is also relatively identifiable, but still underrepresented, and upper class is portryed almost as another species. Why would anyone consider themselves upper class? The CEO who flies a private jet to his private island doesn't have a blue blood and a title, he's just a normal guy with a house on every continent.

On a broader level, the upper middle class doesn't really recogize themselves as such either. I've met people out of the working class who might never have been on a longer holiday and with parents who might never have finished high school. And I've met people from a high edicational background who travel the world and honesly think of themselves as working class! This is one of those issues where you have to start with the person in the mirror

When my partner bought a house he said he was 'middle class now.' Since i grew up in council house on benefits while he grew up in a house his parents owned, i told him i think he was 'always middle class' and working in a lower class job didn't change that really.

[…] But very few people will admit this, because very few people feel like they’re upper class. I find this phenomenon fascinating, and it’s certainly not limited to Australians. […]

Working class?!!! I think there is some political ideology warping this discussion.

[…] way. And although I’m not as comfortable as Chris Christie, I think we fall in the same boat. This blog post from sociology professor Jay Livingston looked at exactly that dilemma: Why do rich people think […]