Culture and Privacy: A Sociology of the Shotgun House

In the working and middle class neighborhoods of many Southern cities, you fill find rows of “shotgun” houses. These houses are long and narrow, consisting of three or more rooms in a row. Originally, there would have been no indoor plumbing — they date back to the early 1800s in the U.S. — and, so, no bathroom or kitchen.

Here’s a photograph of a shotgun house I took in the 7th ward of New Orleans. It gives you an idea of just how skinny they are. 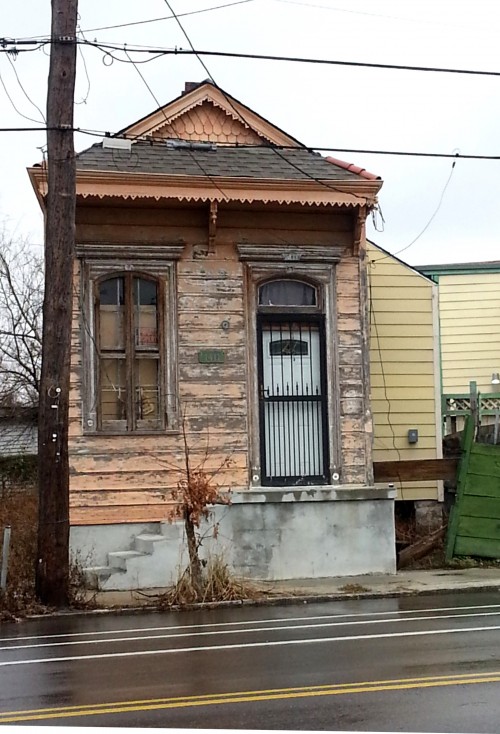 In a traditional shotgun house, there are no hallways, just doors that take a person from one room to the next. Here’s my rendition of a shotgun floor plan; doors are usually all in a row:

At nola.com, Richard Campanella describes the possible origins and sociological significance of this housing form. He follows folklorist John Michael Vlach, who has argued that shotgun houses are indigenous to Western and Central Africa, arriving in the American South via Haiti. Campella writes:

Vlach hypothesizes that the 1809 exodus of Haitians to New Orleans after the St. Domingue slave insurrection of 1791 to 1803 brought this vernacular house type to the banks of the Mississippi.

In New Orleans, shotgun houses are found in the parts of town originally settled by free people of color, people who would have identified as Creole, and a variety of immigrants. Outside of New Orleans, we tend to see shotgun houses in places with large black populations.

The house, though, doesn’t just represent a building technique, it tells a story about how families were expected to interact. Shotgun houses offer essentially zero privacy. Everyone has to tromp through everyone’s room to get around the house. There’s no expectation that a child won’t just walk into their parents’ room at literally any time, or vice versa. There’s no way around it.

“According to some theories,” then, Campanella says:

…cultures that produced shotgun houses… tended to be more gregarious, or at least unwilling to sacrifice valuable living space for the purpose of occasional passage.

Cultures that valued privacy, on the other hand, were willing to make this trade-off.

Sure enough, in the part of New Orleans settled by people of Anglo-Saxon descent, shotgun houses are much less common and, instead, homes are more “privacy-conscious.”

Over time, as even New Orleans became more and more culturally Anglo-Saxon — and as the housing form increasingly became associated with poverty — shotguns fell out of favor.  They’re enjoying a renaissance today but, as Campanella notes, many renovations of these historic buildings include a fancy, new hallway.

I would also posit that perhaps this is a regional difference as well, as the term "shotgun house" didn't mean this style at all in Denver when I was growing up. It was used for the kind of one bedroom (two at most) very tiny house in which the front door was almost directly across from the back door. (i.e., folklore that you could shoot a shotgun from front to back with nothing in the way) I never heard that they were connected with any particular group or "type of neighborhood" except for poverty level. And most seemed to be built no later than the 70s.

In my city, the houses called "shotgun" houses are very narrow-fronted - at one time the city taxes were bases on width of lot and not total area. Most have a hallway down one side of the house to access the other rooms, and the front and back doors are off either end of the hallway.

However, this is a west coast city, so the shotgun houses are probably at least 100 years younger than the ones in New Orleans.

Sans Souci, a palace in Potsdam, is shotgun. In fact, many French-style palaces of the era were shotgun.

Shotgun houses were built narrow for both property tax reasons; taxed by footage across the front of the house and because it was easier to cool by opening the two doors so the breeze could blow thru.

I've seen real estate programs in the UK where shocked shoppers seeking historical properties would pass on pre-18th century homes that also utilized floorplans that maximized space over privacy. its a relatively recent phenomenon even for Anglo Saxon culture. There is a documentary program on the BBC called "The History of the Home" that also may be of interest.

Note the narrowness of the house shown. A hallway would not just diminish the room size - it would cut it in half! Most Southern shotgun houses are just too small for a hallway.

There are also Railroad flats, apartments with a similar no hall structure. Don't know the derivation of the term. I lived in one and that's what my mother called it.

Interesting that they are still detached, rather than terrace houses (which are found in other parts of New Orleans). Does this mean despite this attitude to privacy within the home, they still wanted independence from the neighbors? Or that land and housing materials were seen as more affordable than ongoing property taxes?

Also seen in parts of New Zealand, in inner-city (then working class) areas. So perhaps the origins are European as well as west African. Acertsinly colonial. You could get two houses built on one plot of land- a developers dream.

The Architecture of Gentrification; Or, The Dining Rooms are Coming – Inequality by (Interior) Design — June 1, 2016

[…] they’ve been merging them. Duplexes are becoming larger single family homes with hallways (which substantially changes the dynamic among its residents) and makes space for dining rooms. Check out the new dining room […]

Hi Lisa, I'm a photographer from NY. I'm doing a book on New Orleans that with the Preservation Hall that will raise one for their foundation to help kids get started in the arts. I noticed your shotgun home article.
The image of the home in the 7th ward interests me as well as others. Might you be able to tell me location wide were that one is and any others you might think to be indicative of that style.

[…] they’ve been merging them. Duplexes are becoming larger single family homes with hallways (which substantially changes the dynamic among its residents) and makes space for dining rooms. Check out the new dining room on […]

Thanks for sharing. I found a lot of interesting information here. A really good post, very thankful and hopeful that you will write many more posts like this one.