While the ’50s is famous for its family-friendly attitude, the number of hours that parents spend engaged in childcare as a primary activity has been rising ever since: 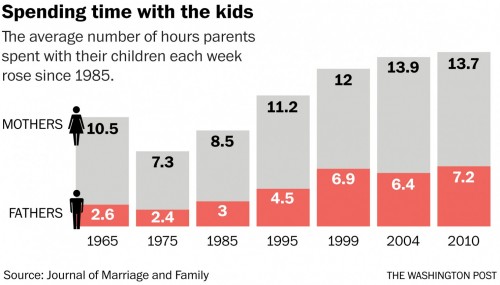 The driving force behind all this focused time is the idea that it’s good for kids. That’s why parents often feel guilty if they can’t find the time or even go so far as to quit their full-time jobs to make more time.

This assumption, however, isn’t bearing out in the science, at least not for mothers’ time. Sociologist Melissa Milkie and two colleagues just published the first longitudinal study of mothers’ time investment and child well-being. They found that the amount of time mothers spent with their children had no significant impact on their children’s academic achievement, incidence of behavioral problems, or emotional health.

Quoted at the Washington Post, Milkie puts it plainly:

I could literally show you 20 charts, and 19 of them would show no relationship between the amount of parents’ time and children’s outcomes… Nada. Zippo.

Benefits for adolescents, they argued, were more nuanced, but still minimal.

These findings suggest that the middle-class intensive mothering trend may be missing its mark. As Brigid Shulte comments at the Washington Post, it’s really the quality, not the quantity that counts. In fact, Milkie and colleagues did find that “family time” — time with both parents while engaged in family activities — was related to some positive outcomes.

The findings also offer evidence that women can work full-time, even the long hours demanded in countries like the U.S., and still be good mothers. Shulte points out that the American Academy of Pediatrics actually encourages parent-free, unstructured time. Moms just don’t need to always be there after all, freeing them up to be people, workers, partners, and whatever else they want to be, too.

There appears to be a mix-up with WaPo's bar graph. The bar for 2004 is slightly shorter than 2010, despite the larger number of hours in '04. Can't say it's intentional but it certainly misses the nuance in the differences year-to-year.

I don't have kids, but these numbers are lower than I expected.

I wonder if it might be better if children were just given up at birth to be wards of the state. Is there any reason to burden 2 young adults with them when the real benefits of adding to the population is really at the societal/economic level? Ultimately, isn't child-rearing inside some embarrassingly outdated version of "a family" just a useless hassle?

They still need parents, Bill. The point is that helicopter parenting or "intensive parenting" is not necessarily benefitting children. As a parent, my kids love unstructured time and they come to me when they want mom time or go to dad for dad time. I let them decide when they want to include me in their play most of the time rather than smothering them with constant attention, as this annoys both my 3 and 11 yr old children.
I am not completely uneducated on the subject. (M.S. Psy)

Dr. Wade is a professor of sociology and an author on gender issues. How disappointing - alarming perhaps - and very, very illustrative that she should choose to put on an article about children and their parents a headline suggesting it is all about Mom.

Prison data showing that the majority of inmates are from single parent families seems to contradict this "finding".

As a mom my first thought was: What about relationships, commitment, values, etc.? I can have an emotionally stable child with no behavioral issues who excels academically and be raising a robot. I am not a helicopter parent by any means, but to say my time and attention to my children should be less is ridiculous...it's quality AND quantity, just not a quantity equal to smothering, and then learning to let go. And it's not the presence of single mothers, but the absence of fathers I suspect playing more of a role with who we see in our prisons, that is a verifying statistic.

You write that, "The findings also offer evidence that women can work full-time, even the long hours demanded in countries like the U.S., and still be good mothers." Certainly. Point well made: mothers do not need to be there 100% of the time. Some of us can manage to do others stuff as well, like have paid jobs, and the world keeps turning. But there is more too it than that. It is right-on of you to put forward the idea that women can be paid workers and still be beautiful mothers (of course we can!) and I understand that in a conservative political climate it is important to do this, and also that it might be tempting to overstate the extent to which mothers aren't needed at home. But if you take a look at the study by Milkie I mention above (which mightn't be what you read) what I notice is that it is centrally about how challenging it is to juggle work and family commitments in a balanced way. The authors begin by stating, "Paid work and family life each demand substantial commitments of time and energy, and many adults find it challenging to balance these". On the final page they say, "regardless of the actual amounts of time with children, feeling they spend the right amount of time with children, and that children are thriving, are central challenges for employed parents."
ie. IT IS HARD, and it matters a lot to parents. They are not saying it makes no difference to the kids, they are reiterating that its just so hard to achieve balance.

To say that time spent with kids makes, "no difference" to kids' achievement and wellbeing is bizarre, but I suppose it goes to show it depends what you're measuring. Parental supervision has been established as an indicator for behavioural outcomes in children. Educational research tells us that children should have thousands of books read to them before school start, and that there are class differences in the extent to which this occurs at home.

To say that women give up their fulltime jobs just to helicopter around their kids is so simplistic, its unhelpful. You need to look at structural issues like the availability of (good quality) childcare (the USA has massive problems in that area), and workplace flexibility. Mothers don't need to be there ALL THE TIME, but that is not the same as saying that it makes no difference whatsoever.

I loved that the authors said, "Increasing employed parents' ability to be with and improve children's well-being through paid family leaves, flexibility, and job sharing are likely to enhance their sense of balance and mental health, which can extend to the whole family (Milkie, 2010). In particular, the finding of the importance of routine care for middle-class fathers' sense of work-family balance suggests that it is important to create workplace cultures that encourage male managers and executives—who tend to overwork—to arrive at work later or leave work earlier so that they can drop off or pick up their children before or after school and be more of a part of their care." (p.1342)
For me, that was the critical sociological point (in the article I found, which like I said, mightn't be what you were citing!)

I was a stay-at-home mom for 7 years, until my second child entered second grade. My children did well, but there were some years when my second child nearly failed a course in high school. A similar situation now exists for a friend. Quality and quantity time at home will set models of living, but the child has her own motivational energy. There is a disconnect (without reading the paper, I say this) between what is given by the parent, or what is modeled by the parent, and what the school environment for achievement provides. Now I am a caregiver for a pre-schooler for 2 and 1/2 years. He has received even more attention than my own children, as I am not also a homemaker during that care. So his full-time working mom and dad, who also try to give quality time (but actually less than my 40+ hours), do indeed have a high-achiever even as he is only 3 years old. The domestic scene is so complicated, I doubt such studies can really be indicators of parenting or education. FYI I am a social scientist, but also trained as a teacher, both public and Headstart. Now I also work with children with disabilities. Who counts in these studies anyway?