What Accounts for the U.S. Cop Kill Rate? A Case for Guns

This story from Daily Kos has been quickly circling through the left portion of the Internet. The headline reads:

American police killed more people in March (111) than the entire U.K. police have killed since 1900.

Let’s assume that the numbers are accurate.*

Don’t bother adjusting for population differences, or poverty, or mental illness, or anything else. The sheer fact that American police kill TWICE as many people per month as police have killed in the modern history of the United Kingdom is sick, preposterous, and alarming.

The U.S. has a much larger population, and it has more police officers:

…but even adjusting for that, the U.S. killings by cops dwarf the U.K. figure.** 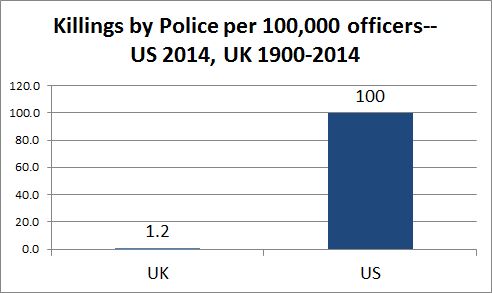 Adjusting for the number of cops, U.S. cops killed 8 times as many people in a single year as U.K. cops did in 115 years. But before we conclude that U.S. law enforcement is “sick and preposterous” and dominated by homicidal racists, we might look at the other side – the number of cops who get killed. The entire U.K. police force since 1900 has had 249 deaths in the line of duty. The U.S. tally eclipses that in a couple of years. 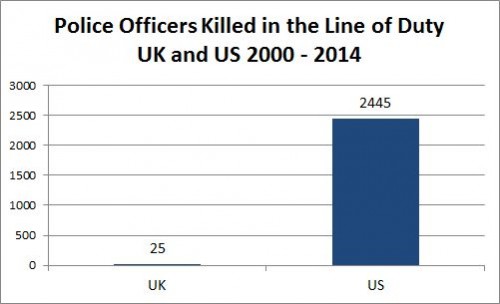 In this century, 25 U.K. officers died in the line of duty. The figure for the U.S., 2445, is nearly one hundred times that. Adjusting for numbers of officers, U.S. deaths are still ten times higher.

My guess is that what accounts for much of the U.K./U.S. difference is guns. Most British cops don’t carry guns. Last August, I posted a video of a berserk man wildly swinging a machete in a London street (here – it’s gotten over 25,000 page views ). The police come, armed only with protective shields and truncheons. Eventually, they are able to subdue the man. In the U.S., it’s almost certain that the police would have shot the man, and it would have been completely justifiable. More cops with guns, more cops killing people.

But more civilians with guns, more cops getting killed. Since 2000, six U.K. cops have died from gunshots; in the U.S., 788.  We have 11 times as many cops, but 130 times as many killed by guns. (The other two leading causes of police deaths are heart attacks and car accidents.) 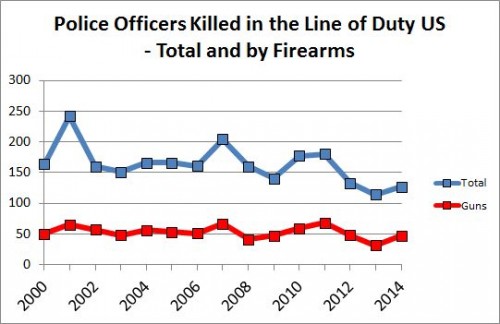 (I did not include the yearly data for the UK since it would not have been visible on the graph. In most years, total cop deaths there ranged between 0 and 2.)

Thanks to the ceaseless efforts of gun manufacturers and their minions in legislatures and in the NRA and elsewhere, U.S. cops work in a gun-rich environment. They feel, probably correctly, that they need to carry guns. If that man in London had been wielding an AR-15 (easily available in many states in the U.S. – in the U.K., not so much, not at all in fact), the cops could not have responded as they did. They would have needed guns. There would probably have been some dead civilians, perhaps some dead cops, and almost certainly, a dead berserker.

* We don’t have a good source of data on how many people the police kill. An unofficial source since 2013 is KilledByPolice.net.

** The denominator for the U.K. – the number of police officers over the last 115 years  – is my own very rough estimate.

I don't see any other way to interpret this. For once, I completely agree with Dr. Livingston. The government has a monopoly on (legal) violence and many thoughtful folks have long found that to be troubling and -- if for no other reason -- believed that has justified the right to bear arms. I am not unsympathetic to those concerns; however, everything comes at a cost. It's time that we face that cost squarely so we can have an informed discussion about whether or not the cost is worth the benefit, and just how far we are willing to go in resisting even modest regulation.

A) There is a natural tension between much of the philosophical underpinning of the gun lobby's arguments and the government's monopoly on violence.
B) I'm not sure that civilization can be long sustained if government can not robustly retain this monopoly.
C) The end of civilization is not something for which most conservatives are pining.

The kill or be killed attitude of police seems reasonable and guns are the culprit.

But with the incredible number of guns in the country and the fact that ANY talk of restriction leads to mass purchasing of even more guns it's hard to see how this will change in our lifetimes. Anyone having even the mildest criminal intentions will have the ability to own a gun and that will likely continue for...ever...

Minor typo in the second-to-last paragraph (inside the parentheses): "would to" should read "wouldn't have"

Adding the per capita (and total) number of guns in civilian hands in each population would add excellent context to this story.

It would be interesting to see how Northern Ireland compares to the US. It looks like those figures of 249 police deaths and 100-odd police kills in the 20th century exclude the Irish War of Independence and the Troubles, two domestic conflicts (from the contemporary British perspective) in which 'police' forces were heavily involved. Even today, Northern Ireland has a significant 'gun culture' in a way that the rest of the UK does not: police in Northern Ireland are routinely armed, and civilian gun ownership is much higher than in Great Britain (especially of handguns, which are essentially illegal in Great Britain).

I agree with you that it is almost certainly largely because of guns (though it's also very well-documented that inequality increases violent crime).

Why did you not provide equivalent statistics (i.e. same time-ranges) for cop killings in the US/UK and for cops killed? I'd be keen to know on which measure the U.S is more disproportionate compared to a more normal country.

responding to violence by escalating violence is part of the problem. The UK may have a more pronounced clas system than most other democracies, but at least they benefit from a welfare system and the occasional government protecting their interests. In the US, safety nets for the poor are minimal, and millions get thrown into prisons that seem more like storage than a start to a less destructive path. If there's nothing to stop people from falling outside the law and nothing to catch them once they do, is it any wonder you have a violence problem?

[…] Jay Livingston is the chair of the Sociology Department at Montclair State University. You can follow him at Montclair SocioBlog or on Twitter.(View original at http://thesocietypages.org/socimages) […]

What Accounts for the U.S. Cop Kill Rate? A Case for Guns » Antropologia Masterra — April 8, 2015

Something else to take into consideration:

The more unequal the society, the greater the homicide rate. The US has much greater inequality that the UK; and is a total outlier in terms of homicide rates.

[…] estimate of what is actually going on. But even this does not paint a rosy picture. American police killed more people last month alone than the entire British police force has in the past 115 years (a difference that […]