The White House has made preventing sexual assaults on college campuses a priority, The Hunting Ground documents extensive institutional denial and malfeasance, the Department of Justice finds that one in five college women are assaulted, research shows that 1 in 25 college men is a serial rapist, and students at almost 100 campuses have filed federal complaints against their schools.

Yet, according to a study of 647 college presidents, only a third (32%) believe that sexual assault is prevalent on college campuses in general and only a tiny minority (6%) think it’s prevalent on their own campus. 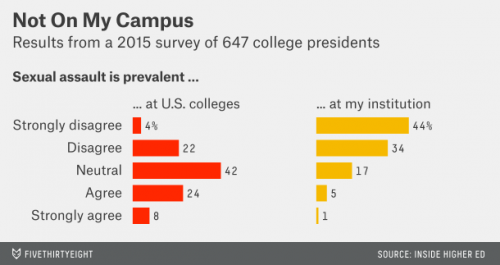 This is stunning. Never before in history has the problem of sexual assault on campus been better documented. The media has never covered the issue so thoroughly, frequently, and sympathetically. We are in a moment of national reflection. Under these circumstances, a quarter of college presidents claim that sexual assault isn’t prevalent anywhere and 78% deny that it’s prevalent on their own campus.

These were confidential surveys, so impression management can’t explain these numbers. Those 94% of college presidents who don’t think that sexual crimes are prevalent at their schools either think the numbers are wrong, think their own institutions are exceptions, or think that one in five isn’t fairly described as “prevalent.” Or maybe some combination of the above.

No wonder faculty are frustrated and students around the country have felt forced to turn to the federal government for help. It’s clear. College presidents are either recklessly ignorant or willfully in denial — that, or they simply don’t believe women or don’t care about them.

It's quite easy to see why college presidents would underestimate the sexual-assault problem. Both the Department of Justice (in 2000) and another study in 2010 found that 95% of campus rapes go unreported. So if there are 100 incidents on your campus one year, you'd probably find that prevalent. But if only 5 reports make it onto your desk, you might look at that and think it's relatively rare compared to the sexual assault rate in the general population. (Notably, other data I've seen show that the rate of on-campus rape is slightly lower than that of young women who aren't enrolled in college.)

Institutional denial does play a role here - and at least partly accounts for why so few victims choose to report the crimes in the first place. But this particular survey is somewhat flawed in its word choice, as there's quite a broad spectrum beween "prevalent" and "rare."

How many of those presidents are men?

[…] studies suggest that many college presidents don’t see sexual assault as common or a big problem on their campuses, despite national statistics pointing to it being a major issue across the nation. […]

How does it feel about sexual crime in the college campuses.