Is Marijuana a Gateway Drug? Findings Lean from Mixed to No

All politicians lie, said I.F. Stone. But they don’t all lie as blatantly as Chris Christie did last week in repeating his vow not to legalize marijuana in New Jersey.

Every bit of objective data we have tells us that it’s a gateway drug to other drugs.

That statement simply is not true. The evidence on marijuana as a gateway drug is at best mixed, as the governor or any journalist interested in fact checking his speech could have discovered by looking up “gateway” on Wikipedia.

If the governor meant that smoking marijuana in and of itself created a craving for stronger drugs, he’s just plain wrong. Mark Kleiman, a policy analyst who knows a lot about drugs, says bluntly:

The strong gateway model, which is that somehow marijuana causes fundamental changes in the brain and therefore people inevitably go on from marijuana to cocaine or heroin, is false, as shown by the fact that most people who smoke marijuana don’t. That’s easy. But of course nobody really believes the strong version.

Or maybe Christie meant a softer version – that the kid who starts smoking weed gets used to doing illegal things, and he makes connections with the kinds of people who use stronger drugs. He gets drawn into their world. It’s not the weed itself that leads to cocaine or heroin, it’s the social world.

That social gateway version, though, offers support for legalization.  Legalization takes weed out of the drug underworld. If you want some weed, you no longer have to consort with criminals and serious druggies.

There are several other reasons to doubt the gateway idea. Much of the evidence comes from studies of individuals. But now, thanks to medical legalization, we also have state-level data, and the results are the same. Legalizing medical marijuana did not lead to an increase in the use of harder drugs, especially among kids. Just the opposite. 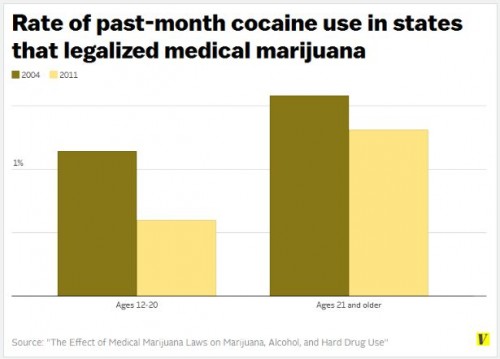 First, note the small percents. Perhaps 1.6% of adults used cocaine in the pre-medical-pot years. That percent fell slightly post-legalization. Of course, those older people had long since passed through the gateway, so we wouldn’t expect legalization to make much difference for them. But for younger people, cocaine use was cut in half. Instead of an open gateway with traffic flowing rapidly from marijuana through to the world of hard drugs, it was more like, oh, I don’t know, maybe a bridge with several of its lanes closed clogging traffic.

So long as it is put in with other hard drugs, treated as equal to them it by definition is a gateway drug. Disconnect it from the rest, and it no longer will be. The issue is about structure.

Most people like to alter their mental state with drugs and many overdo it. The gateway issue is more specific to the social environment than any specific drug. Amphetamine abuse in the 50s and early 60s was more likely to be associated with alcohol abuse and wasn't really a "gateway" to pot and so on.

I'm not too interested in the rhetorical banter around legalizing pot because it seems like the ayes have it and we shouldn't be surprised to see it spread as fast at the state level as gay marriage now. Benefits include profits for business, tax growth, and fewer dollars in the pockets of back-stream low-life dealers.

I guess it'll be a win for society, although I'm not sure why we should get too excited about it.

If prohibition has any effect, it makes cannabis a gateway to other illicit drugs.

The gateway drug theory, that a unique pharmacological effect of cannabis causes the use of hard drugs, has been discredited by the many peer reviewed studies which have examined it.[1,2,3,4,5,6,14,15,16,19]

If the gateway theory were to have any merit, then alcohol and tobacco would be the gateway drugs as nearly all have tried these before cannabis.[1,6] There are many factors that determine which illicit substance will be used first, including availability and culture. In Japan, where cannabis use is not popular and largely frowned upon, 83% of illicit drug users did not use illicit cannabis first.[19] In the U.S., since cannabis is by far the most popular and available illegal recreational substance, it is unlikely that you would find many illicit hard drug users who did not encounter and use illicit cannabis first.[1] This does not mean cannabis caused their hard drug use. Rather it was their pre-existing interest in recreational substances combined with their willingness to try illicit substances and cannabis was simply, and predictably, the first encountered.[3,14,19] On a related note, studies have shown that cannabinoids can help treat those addicted to hard drugs and alcohol.[4,7,18]

If anything, the prohibition of cannabis makes the hard drug problem worse. Once someone breaks the law to try the very popular and relatively safe drug cannabis, their reluctance to try another illegal substance diminishes. This is both because of their increased doubts of government honesty regarding the harmful effects of those substances as well, and their newly reduced respect for the laws against them. Cannabis prohibition also connects cannabis consumers to the hard drug market. Imagine if beer merchants also sold heroin, cocaine and meth. This is the situation that the prohibition of cannabis creates for its consumers. It places a very popular substance into these otherwise unpopular markets, strengthening them and expanding their reach. Also, with no legal recourse to resolve disputes, cannabis prohibition increases the crime associated with these markets. The promotion of the erroneous gateway theory ultimately does the public a disservice, including the hindering of intervention.[19]

Regardless, one major concern is that relaxed laws will lead to significantly increased teen usage, but this has not been the case. Legalizing medical cannabis in the U.S. has not increased cannabis usage in teens.[8,9,10,11] Even decriminalization does not result in increased cannabis consumption for all ages except for a small, temporary increase during the first few years.[12,13] Portugal even saw reduced adolescent cannabis use after decriminalizing all drugs in 2001.[17]