Power and the Gaze: What Does Resistance Look Like?

In 1975, Mulvey conceptualized the gaze as the power derived by the viewer when they cast their glance upon a hierarchized, usually female, body. This idea perfectly captures the way a subject on film is both frozen in a time and space, and consumed. I want to turn that around, in a more kyriarchal and postmodern fashion, and allot power to the subject.

Refinery 29 has a series of photographs by Blaise Cepis. Through them, women discuss and display their body hair.  In a beautifully hued array, these women speak of personal choice, empowerment and acceptance in ways that act as a counternarrative to the Brazilian-plucked-chicken-prepubescent-non-mammal-landscaping construct that is currently in vogue.

And yet. Yet. Among this abundance of hairy joy – there is no direct gaze. Among the 21 slides there are faces in profile, lower portions of faces, averted glances with pupils looking away. There is only one woman directly glancing at the viewer, and even as her defiant brows dominate her face she is neither fully seen nor subsequently fully known. Also, nowhere in the 21 slides does the women’s whole body occupy the visual frame. The pictures show a bushy underarm with barely a chest wall or breast, a lushly forested pudenda without whole legs or torso, or a lightly furred arm without a hand attached.

Counter this power and gaze conundrum with Kim Kardashian’s photoessay for Paper’s Winter issue where she appears, full frontal, body hair free, and fully faced. With the hashtag #breaktheinternet, the intent of the shoot is clear. Neither during the photoshoot’s extended video interview or the accompanying print piece does Kardashian invoke feminism’s ideals of choice, power or acceptance. Yet, in her direct gaze and whole body there is a definitive power of being fully present in the visual medium.

Censored to be safe for work, but you can see the original here: 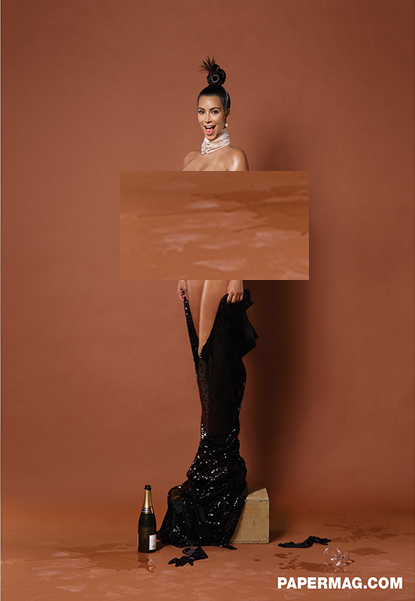 In his classic Disidentifications, Munoz interrogates the intersections between queer theory and life as performance to illustrate the ways hegemony is constructed. All the women in the photoessay above are performing: to disrupt a gaze by capturing the consumer; to deliver through visual imagery a counternarrative to normed assumptions; to shine a spotlight upon their bodies so that other stories can be told about them that subsequently reflect the world. These are all photos of “naked women”, but they are not equal in power.

Make no mistake, Kardashian’s photoshoot does not aspire to be anything but  performance – a denuded spectacle that we can believe – illustrating her power to create reverberating social narratives. But the theme of empowered, hirsuit women who embrace the social, sexual, and personal repercussions of their decision is undercut by the disembodied visual presentation. The power of these women has no whole body in which to reside. They are intended to be read as both brave and everyday, but they are visually reduced to decontextualized hair clumps; the performances of pride do not ring true because the viewer does not witness the incorporation of their body pride into a fully human landscape. Frankly, if women are going to “grow hair there” – we need to fully embody it.

Kerrita K. Mayfield, PhD is an experienced social justice oriented educator and teacher trainer, with over 20 years working in urban and rural classrooms and alternative educational settings. Currently teaching ESL at UMass Amherst to liminal non-benefitted workers, she was the first student to earn a graduate minor in Women’s Studies at the University of Wyoming.

That's an interesting perspective on the framing of those photos I hadn't thought of. My first reaction was that they were framed to focus attention on the body hair and close enough to clearly distinguish individual hairs.

This is exceptional! On the meme site 9gag, the Kardashian photo was immediately followed with the search and release of the Original, non photoshopped image that was Not shown. With worldwide male/female subscribers, the mass of posts and commentary revealed far more about what it would take to "#breaktheinternet". In addition, the hirsuit full woman, and just about every "type" makes appearances. Whilst following posts like this, as a divorced white, muddle aged Male with Mother, sisters and daughters, following 9gag is a rollercoaster ~ but a worldwide force that gives me hope for my grandchildren as they come if age. I hope they can choose media that allows for more than what is currently accepted, I can see the art perspective for the hair. Though I agree with the Author of this post. The subjective finished work feels lacking.

I just wish Kim's photos didn't make her look like she rubbed grease all over her body.

Power and the Gaze: What Does Resistance Look Like? » Antropologia Masterra — March 25, 2015

Including a few full-body shots would have been better, but I kind of like the focus provided by giving each area of the body a close-up as well. Also, since the photos resemble ads in some ways, they might provide a more direct contrast to the usual fake, airbrushed look. Still strikes me as an empowering series.

True. There is a stark difference between the romanticized body part in the first series and the naked woman goofing off in the second. It ties in to the usual feminist reminder when it comes to womens' bodies: make women subjects, not objects under a different ideal.

[…] Power and the Gaze: What Does Resistance Look Like? A good SocImages post that gives a analysis (re: gaze) of a beautiful set of images of women’s body hair posted recently on Refinery 29. “But the theme of empowered, hirsuit women who embrace the social, sexual, and personal repercussions of their decision is undercut by the disembodied visual presentation. The power of these women has no whole body in which to reside” […]

nobody wants to look at your armpits cause they stink

[…] Sociological Images compares a recent Refinery 29 post featuring women proudly displaying what is generally considered to be “more” body hair than fits within the current beauty standard, and Kim Kardashian’s body-hair-free nude photoshoot for Paper. How did each handle The Gaze?  […]