Beliefs About Brilliance and the Demography of Academic Fields

A new study led by philosopher Sarah-Jane Leslie challenges the idea that women are underrepresented in STEM fields. They first note that there are some STEM fields where women do well (they are 54% of molecular biologists, for example) and some humanities fields where they don’t (they are only 31% of philosophers). Something else, they gathered, must be going on.

They had a hunch. They asked 1,820 U.S. academics what it took to be successful in their field. They were particularly interested in answers that suggested hard work and ones that invoked brilliance.

Their results showed a clear relationship between the presence of women in a field and the assumption that success required brilliance.  The downward sloping line represents the proportion of female PhDs in stem fields (top) and social science and humanities fields (bottom) as they become increasingly associated with brilliance: 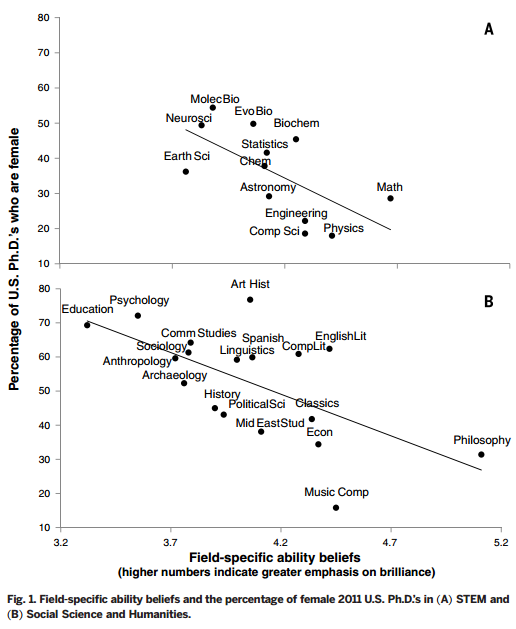 Cultural associations link men, but not women, with raw intellectual brilliance… consider, for example, how difficult it is to think of even a single pop-cultural portrayal of a woman who displays that same special spark of innate, unschooled genius as Sherlock Holmes or Dr. House from the show “House M.D.,” or Will Hunting from the movie “Good Will Hunting.”

In contrast, accomplished women are often portrayed as very hard working (and often having given up on marriage and children, I’ll add). She continues:

In this way, women’s accomplishments are seen as grounded in long hours, poring over books, rather than in some special raw effortless brilliance.

They extended their findings to race, testing whether the relationship held for African Americans, another group often stereotyped as less intelligent, and Asians, a group that attracts the opposite stereotype. As hypothesized, they found the relationship for the first group, but not the second (note the truncated y-axis). 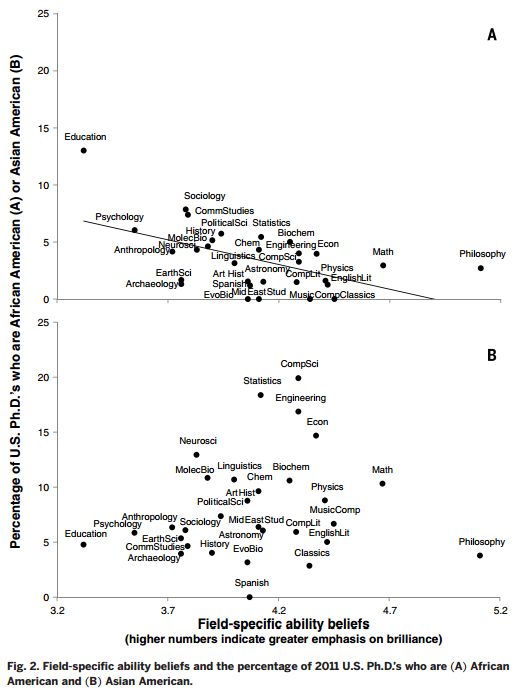 The long term solution to this problem, of course, is to end white and Asian men’s claim on brilliance. In the meantime, the research team suggests, it may be a good idea to stop talking about some fields as if they’re the rightful home of the naturally brilliant and start advocating hard work for everyone.

It's important to make sure that the study measured what it purported to measure. That's called into question by the following post:
http://slatestarcodex.com/2015/01/24/perceptions-of-required-ability-act-as-a-proxy-for-actual-required-ability-in-explaining-the-gender-gap/

Also, upon reading the study, it does not remotely challenge the idea that women are underrepresented in STEM fields. It does tell us that there are some degrees in STEM where women are equally represented, but those are few and far between.

Beliefs About Brilliance and the Demography of Academic Fields - Treat Them Better — March 23, 2015

[…] Beliefs About Brilliance and the Demography of Academic Fields […]

"The long term solution to this problem, of course, is to end white and Asian men’s claim on brilliance."
This is a goal-state, not a solution. You almost never offer real solutions and telling us its a solution doesn't make it one.

Pop culture examples of a women with a "special spark of innate, unschooled genius": Girl With the Dragon Tattoo, Gone Girl.... wait, maybe there is something wrong with this picture....

Maybe there are just more clever men? oops no, the girls don't like that explanation so it can't be true!

And for god's sake, stop praising math heavy subjects just for the sake of having maths. The general ideas of intelligence do a lot of damage, not only by handing acknowlegement to successful women like a backhanded compliment (wow, what a strong successful woman. boy must she be miserable and a horrible person), but by devaluing subjects that don't adhere to theidea of objective truth or natural scientific method. Worst example of all here is of couse equality politics, where any random person with an opinion is somehow an equal match to someone who has dedicated half their life to following the movements that subjects like gender studies sprang from and know what works and what doesn't.

There is a pretty critical 3rd variable they are missing. Women tend to gravitate to fields that involve people and living systems. The graph just represents that trend, perceived brilliance has nothing to do with it.

A philosopher did this "study." Questionable right off the bat.

[…] Beliefs About Brilliance and the Demography of Academic Fields | Sociological Images (March 23): “Their results showed a clear relationship between the presence of women in a field and the assumption that success required brilliance.” […]

Beliefs About Brilliance and the Demography of Academic Fields » Antropologia Masterra — March 27, 2015

[…] Rest: Beliefs About Brilliance and the Demography of Academic Fields – Sociological Images. […]

[…] Beliefs About Brilliance and the Demography of Academic Fields […]