Children, Chores, and the Gender Pay Gap at Home

Girls do more chores than boys and are less likely to get an allowance in exchange for their work. When they do, they are paid less.

Research projects on children’s time use find that boys do 43 to 46 minutes of housework for every hour that girls do. When asked to list the chores they do, girls list 42 percent more chores than boys. Girls are as likely as boys to participate in outside chores and more likely to clean their own rooms, help prepare meals, and care for sibling and pets; the only thing boys report doing more often than girls is basic housecleaning. 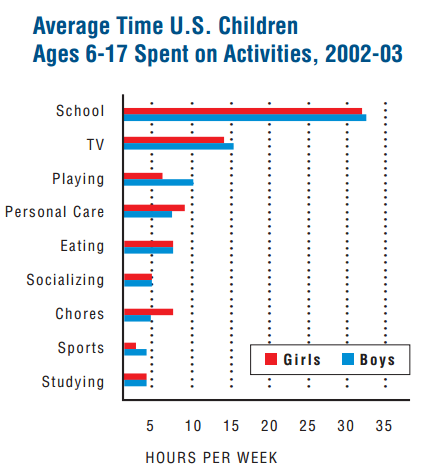 Another study by the children’s magazine Highlights confirmed the finding: 73 percent of their girl readers reported being assigned routine chores, compared to 65 percent of their boy readers. Girls spend more time on chores than they do playing; the opposite is true for boys.

Not only are girls more likely to be asked to help out around the house, they are less likely to get paid. The Michigan study found that boys are 15 percent more likely than girls to get an allowance for the chores they do. And when they do get paid, they get a lower wage than their brothers. Male babysitters get paid $0.50 more an hour than females. Girls do 35 percent more work than boys, but bring home only $0.73 cents on boys’ dollar.

In a couple generations boys have gone from being pushed hard to spoiled rotten. My neighbors who have teen aged boys can't even get them to take out the garbage. Mowing the lawn or shoveling snow is way out of the question. All that stuff would interfere with their video game playing schedule.

The underlying study that supports this claim is pretty flawed. Youtuber Skeptorr does a good job deconstructing it around the 8 minute mark:
https://www.youtube.com/watch?v=RtXO5B8r_ks

I'd also recommend his video "The Final Takedown of the Wage Gap Myth" as a definitive rebuttal to the prevailing narrative.

The gender pay gaps gets learned very early. While learning how to count in
elementary school we also learned who counted! While Bobby earned $1 for a days work washing the dog, Betsy earned only 77 cents.

The idea of a gender based wage gap today seems as antiquated as the retro
school book illustration found in vintage Arithmetic books where we
learned those lessons early. Take a look http://wp.me/p2qifI-28Q

We were very clear that we give our daughter allowance so she starts to learn about money. This is NOT a payment for chores, because everybody helps--unless she was oils like to start paying room and board (she is 11).

I used to believe that girls and boys (women and men) should do equal amount of housework. But what if we "just" do equal amount of work? That is, maybe cooking for me and fixing stuff around the house for my brother? Yes, it looks sexists but we could share based on interests and skills. I'd be the first to jump with joy if girls/women wanted to fix stuff around the house and boys/men wanted to do the cooking as I am a huge advocate of gender equality. If I had kids, I'd teach all of them all the possible things, then let them choose based on interest.

As for schools, I am sure that girls and boys are all capable of the same things but perhaps the way we present the information needs to change. I used to study higher maths in a specialised grammar school, the class had 50% girls, 50% boys and we saw no difference in the abilities between the sexes with regards sciences and liberal arts. We were all equally pushed and equally successful.

I am a teacher of adults, I teach English as a foreign language and despite constantly hearing from my students that women are better at learning languages, my experience does not support this. Usually my male students are better! And they are more interested as well. Now this may have to do with the fact the the women have a share their energy and attention between their work and family responsibilities and cannot solely focus on their classes whereas the guys can just focus on work and learning. But it may have to do with the topics in the class. Men and women do prefer somewhat different topics. I don't know the answer.

What I have do noticed is this: the best male students usually have kids and they share the workload with their wives. They are more open and motivated in class, chatty and friendly and concentrate more. This is of course not scientific, just a teacher's observation.

I think it's nothing to do with abilities, purely a question of interest.

[…] out the gender wage gap starts a lot earlier than you’d think. Girls are doing more chores than boys, and getting paid less for doing so (Sociological […]

As I said to the friend who posted this on Facebook:

It matches up with my personal experience. My daily chores, from age 8
until I moved out: clean kitchen (incl. mopping floor), clean livingroom (incl. vacuuming and dusting all furniture -- including my brother's motocross trophies), clean bathroom, clean my room (where my speech team trophies were required to remain in the closet), wash and dry dinner dishes, clean catbox, feed cat. I was also expected to weed my mother's vegetable garden as needed.

My brother's weekly chore: take trash can out to curb.

Our allowance: $5/week each. I think you can do the math

[…] Children, Chores, and the Gender Pay Gap at Home, Sociological Images When does the gender wage gap begin? Around age 8. Girls do more chores and get paid less, even for stereotypically feminine tasks like babysitting. “Girls do 35 percent more work than boys, but bring home only $0.73 cents on boys’ dollar.” Ugh. […]

CHILDREN, CHORES, AND THE GENDER PAY GAP AT HOME: Boys Get the Advantage? | Welcome to the Doctor's Office — April 8, 2015

[…] in The Society Pages, Lisa Wade, a professor of sociology at Occidental College, discusses several studies that show […]

Yeah lets force parents from different families to pay all children the same pocket money!LULZZZZZ Hey here's another stupid idea! lets demand the government to pay pocket money to children that have parents that can't afford pocket money on a regular basis! (too busy putting food on the table) because equal right! lol We can call it 'the equal pocket money act'! Because I'm an idiot!

Surprising! The gender pay gap is something that cannot be ignored, however, I never thought to think this was happening amongst children at home. My mother never assigned chores for an allowance, chores were to be done and if they were not a lecture was given, but it is my understanding that the idea behind this is to teach children how to earn their money, budget, and learn the importance of hard work. So what sense does this make? This teaches children the opposite- the boys are earning more money despite the lower amount of chores given, while the girls are earning less than they should for the amount of chores given. I do however, think it is important to consider that time does not necessarily mean hard work. People take different amounts of time to do the same tasks just because we’re different as people. Lastly, why does it say girls are in school less hours? are there any other variables not mentioned when calculating this number?

Until We Value Girls the Same as Boys, Violence Against Women Will Continue in High Rates Around the World – Rfiki — January 4, 2016

[…] women’s time and work is valued less than men’s, and that starts at a young age, too. Research shows that girls are paid less than boys for their housework and chores. In adulthood, overall on […]

Until We Value Girls the Same as Boys, Violence Against Women Will Continue in High Rates Around the World « CauseHub — January 4, 2016

[…] women’s time and work is valued less than men’s, and that starts at a young age, too. Research shows that girls are paid less than boys for their housework and chores. In adulthood, overall on […]

[…] pervasiveness of the issue becomes especially evident when children’s chores, WHICH REMAIN HIGHLY GENDERED, are taken into account. When girls are paid CHORE-RELATED ALLOWANCES, they are likely to […]

[…] is often a gendered issue, and there are all kinds of reasons for that, like girls getting more chores growing up and social pressure for women to keep a tidy house. But it’s not only a gendered […]