Renaming Unpopular Fish Gets Them To Your Plate

In an NPR segment, Professor Daniel Pauly discussed overfishing of the world’s oceans. In particular, populations of popular fish such as cod and bluefin tuna have dropped significantly (the increased global desire for sushi having a major impact on tuna).

So what’s a fishing industry to do as it becomes harder to find fish? Of course, they can go farther out into the ocean, or fish deeper into it, looking for populations of popular fish that haven’t been overharvested yet, and they did that. The other option? Switch to species of fish that haven’t been heavily fished yet, usually because they weren’t popular.

As a result, Pauly points out that in the past decade we’ve seen a number of formerly unpopular fish rebranded in an effort to make them seem more palatable.

So, for instance, the “slimehead”… 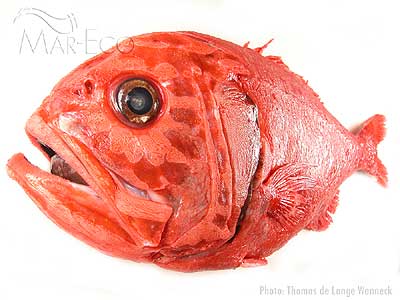 And the “Patagonian toothfish”…

…is now the “Chilean sea bass” (which was subsequently depleted).

It’s a great example of rebranding; what’s especially interesting to me is that the reason for it is the collapse of so many popular fish populations. The fishing industry has to convince people to eat fish that were previously unappealing because it has largely destroyed the basis of its own existence.

Originally posted in 2009. For a different example of rebranding fish, see our post on PETA’s Sea Kitten campaign.

Kiwis used to be called Mud Apples. I think Mud Apples is more appropriate, but, I'm glad New Zealand's economy was able to find something that works better in American grocery stores...

The Slimehead/Orange Roughy has actually been a fairly popular fish for some time-- one of the major reasons for their increased presence on the market of late has been the discovery of a large deep-sea population near Australia, coupled with strides in deep-sea fishing technology.
Unfortunately, as they do not begin to reproduce until they're 20 or so (they can live to be 149) they're in danger of extinction. The entire population has been drastically impacted by deep-sea trawling, and because the more desirable, mature fish are being snatched up first the population is in danger of becoming unsustainable.

Or....
Why don't they just stop fishing altogether? They're just going to run into the same problem of overfishing no matter what species is most popular at the time. It's not like people need to eat fish to survive anyway. With all the pollution in the oceans, I can't for the life of me figure out why anyone would ever eat fish.

Thanks for doing this topic - it's something I've been interested in for years.

Other renamed fish - the snotnose trevalla (now just called "trevally") and the headfish (now called monkfish). Why they haven't renamed the Wandering Sheepshead I don't know.

I have an anecdote! I read it in the paper years ago. Patagonian Toothfish is an illegal fish to sell in Australia, because it's endangered and presumably there isn't a large Toothfish fishery lobby. Despite this, one of our most famed restaurants had it on its menu for a year, because the fishery had sold it to them as "Chilean sea bass" and the owner didn't realise it was the same fish.

And last week there was a big meeting about tuna. Apparently we ate all the tuna, so there's not much left and we have to catch less. Reports here, and here.

I just spent a month on a tiny island (population 54) in the middle of nowhere (300 miles to the nearest other inhabited island). The lagoon and surrounding ocean is teeming with fish, including the big game fish that are endangered most other places. The islanders use traditional handmade nets and spears to fish with.

It's the first time I have eaten fish and NOT had to feel guilty since I can remember. Wonderful!

For the real world, however, I have a handy printout on card that I carry with me to remind me which fish I don't have to feel TOO bad about. Mine's an Australian-specific one, but here's a link (pdf) to one that might be more useful to people who read here.

Rachel, I'd like one of those little cards for Japan. Fish is everywhere, and I'll bet it's all the least-ethically fished in the world.

http://blogfishx.blogspot.com/ is a pretty good site for your fish-on-the-internet needs. Here's one of his posts on this topic (I read a better one elsewhere, but can't find it).

I was listening to this on NPR when it aired. I think if people were closer to their food supply. I believe it was the slimehead (I don't have time to listen to the broadcast again) who can live to be 150 years old and they don't reach adulthood until they're 30 years old. We're wiping them out far faster than they can possibly be replaced...if we were even trying to do such a thing.

I think a lot of people would care if they were a little closer to their food supply's origins. As of now there are many people who think of fish without heads, frozen into steaks or fillets, no tails, no fins, no skin. They don't see a fish's importance to the earth when it isn't part of a meal. I think people would be more cautious and understanding if they caught their own fish using the average fishman's means of a rod and some bait. If they tried to fish in places that became over-fished they would learn not to take more than they need. I'm probably being too idealistic, but that's nothing new.

I wonder why certain fish were "unpopular" in the first place? It's odd.
Because as far as taste, I wonder how many people can really even tell the difference? I've notice for years that certain popular seafoods like red snapper (my favorite!) and scallops are fake much more often than not. According to Congress, "red snapper" is fake as much as 80% of the time. That is, they'll tell you it's red snapper, but what they give you is less-expensive tilapia or whatever. Or, as noted, they just make up a yummy-by-association name like "Pacific Red Snapper," when in fact there is literally no such thing (it's actually rockfish; real red snapper is an Atlantic/Gulf fish).

To me, the difference in taste/texture is obvious, but apparently, it isn't to most people. So if tilapia is so unobjectionable (it's the tofu of the sea!) and can stand in for red snapper (ie: it tastes "just as good"), then why wasn't it this popular years ago?

[...] images notes the connection between rebranding fish with unpopular names and the collapse of fish [...]

The beetroot lesson – the politics of disgust « Fourcultures — November 7, 2009

[...] it is possible to persuade people to eat formerly disgusting fish just by re-branding them as newly tasty fish. People who believe disgust is natural and unchanging are wrong. They might well be eating [...]

Renaming Unpopular Fish Gets Them To Your Plate - Treat Them Better — March 13, 2015

[…] Renaming Unpopular Fish Gets Them To Your Plate […]

Just as a reminder to everyone, please don't eat orange roughy. They are severely overfished and facing extinction. Independent scientists place their age of maturity at 26 years, but fisheries scientists place it at five, meaning that they are allowed to fish them out at around age six, because they have already matured and had the chance to reproduce, which just isn't true.