NPR put together a nice graphic showing the most common job in every state every two years from 1978 to 2014. It’s a fascinating ride from secretaries, farmers, and machine operators to truck drivers, truck drivers, and truck drivers. Click to enlarge. 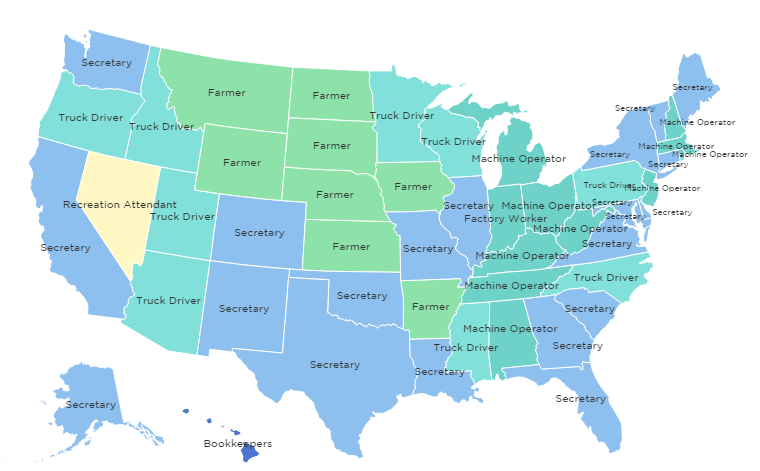 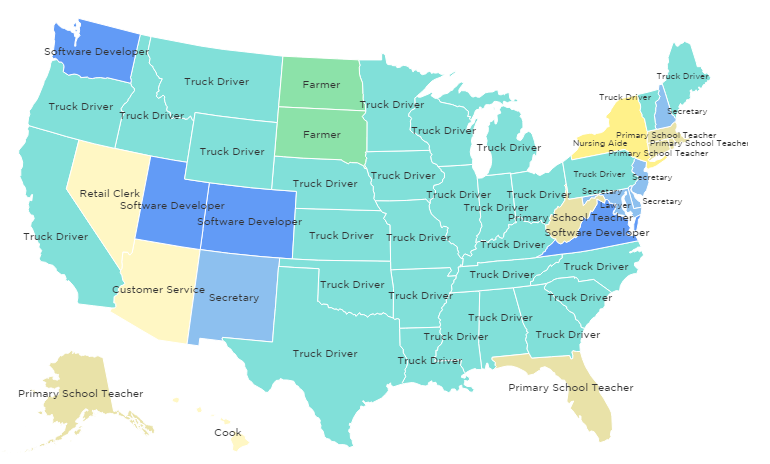 Quoctrung Bui explains some of the trends:

He also points out — with a “heh” — that the most common job in Washington D.C. is lawyer. But he didn’t mention that in 1996 it was janitors. There’s gotta be a politician joke in there, too.

Here are some of the changes I found interesting, with mostly uninformed commentary. The three boxes represent 1978, 1996, and 2014.

Methinks reality television is not telling me the truth about Alaska.

Well, we know what Nevada‘s for. Except I guess people used to go there to do stuff and now they just go there to buy stuff.

New York, the only state on the list that’s top job is nursing. Take that, Florida!

Oh yes, tired but true, everything in American is going to hell in a hand basket on this board. Its got to be one of the worst places to live, unless you consider other places on the planet earth. (Paraphrasing Churchill here.)

FWIW, trucking has become an amazingly green technology, putting more stuff at our doorsteps than every before without us having to drive all over individually to get it (think logistics).

In any event, readers must wonder why there is hardly ever a positive comment about America or American society in general on this board. When read in the collective the picture is one of distrust and even hatred of who we are.

I am proud to defend your right to criticize, but I wonder why you choose to stay here.

How well can our current transportation infrastructure handle all of these trucks? Several times a week, I do "non-rush hour" 20-40 minute trips (15- 26 miles) on 2 major Illinois interstates outside of Chicago.

The amount of trucks that are in the left lane or center-left lane on a 4-lane road is obscene. I have to be extra vigilant about not getting boxed in by trucks. My fuel efficient car is not tiny but could easily be crushed.

But these guys have to make their deliveries on time. I know that I haven't always been the best driver. I hope I've never given any of those truckers a heart attack in my early driving days.

I remember when one of the local community colleges decided that instead of increasing faculty pay they would make the Instructors "Professors." This supposedly made the faculty members feel better about themselves.

It was during the mid- to late-1990s that Secretaries were renamed Administrative Assistants...also without a rise in salary. Of course this change in nomenclature was far more widespread than simply the colleges.

I was asleep when clerks became Sales Associates.

So what's going to happen in 5-10 years, when a significant amount of Trucks will become automated/self-driving?
If it's the most common job in the country.. We're going to see a TON of people becoming unemployed, with no other skills. And there's no way they can all be put back through education/training, far too many of them. Mark my words, there is NO WAY the government will protect workers in these situations. Once the vehicles prove themselves to be safe and reliable, companies will refuse to pay workers just to sit behind the wheel.

Hopefully people will be forced to stop calling the unemployed names like "parasite".. That's never been true anyway, just something the greedy use to justify being greedy.

I think this can also be affected by the fact that the younger generation absolutely doesn't want to work on the field and wants to receive a fairly good salary. If you are a driver, you get a good salary and you can see the world while riding around, what else is needed? I also once thought about this work. But then I found my dream office job and decided to stay. In many respects, it was a merit of https://top5resumewriting.services/resumeprofessionalwriters-com-review/ because it was their resume that helped me to get it.