Dads in Ads: Are Times Changing?

Sociologists have known for a while now that even though women are more integrated in the workplace, men are not as integrated at home. This disparity places extra constraints on women’s time, which Arlie Hochschild calls the “second shift.” During the second shift, women have an obligation to spend their time off caring for their houses and their children without equivalent effort from men.

For the most part, advertising has reflected that (see over 150 examples here). Ads directed at women often tie the product to a smiling, laughing, or hugging child. But until recently, dads have been largely absent from the picture—unless it’s conveniently close to Father’s Day. When dads have made an appearance in an ad, they have been accompanied by an explanation for why their unique take on parenting can be manly, implying that childcare is still women’s work.

Recently, dads have found their way into the ads and they’re starting to look more comfortable there. Swiffer has a father taking care of his son by himself, Dove connects masculinity to caring for kids of all ages, and NyQuil even has two ads with the same plot about the constant demands of parenting for a mother and father. 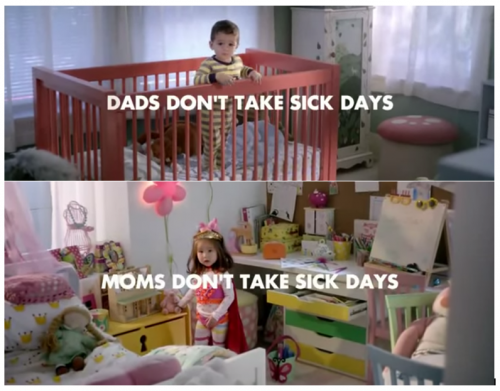 But is active fatherhood the new norm?

Not quite. While some ads casually use competent dads to sell laundry detergent, others use themes that reflect a more troubled transition into a hands-on fathering style. For example, the Nissan Superbowl commercial tells the story father with a risky profession that keeps him on the road and away from home. The ad ends with the dad physically being in the same space as his teenage son. This is cast as a huge victory, but in reality, it’s a pretty low bar. Still, the ad got a lot of attention for being a tearjerker for its emphasis on fatherhood.

When considered as a group, these ads imply not that we’ve arrived at gender equality in the home, but instead that we’re in a stage of transition. We can appreciate active fatherhood, but we’re not entirely sure what it should look like. With the recent popularity of dadvertising, we can expect to see the commercial conversation around fatherhood continue, giving us the chance to watch as Americans learn #HowToDad. 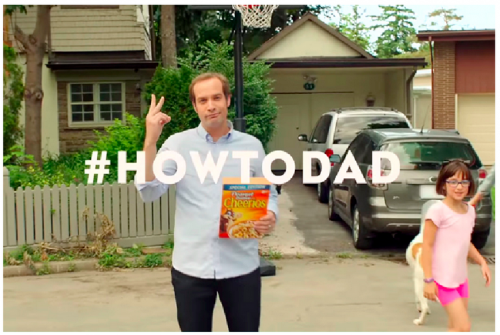 Nicole Bedera is a PhD student in sociology at the University of Maryland, College Park. She is currently studying college sexual assault and construction of young men’s sexualities.

There's a Nikon commercial I just saw for the first time a couple days ago that also fits in this category, with a dad using his Nikon camera to take pictures of him and the kids doing various activities to share with wife/mom, a globe-trotting physician. It really struck a couple chords with my wife, who was raised by a stay-at-home dad who gave up a career as a professional photographer, and who is also a physician (not quite globe-trotting...yet) and the primary bread-winner for our family. It's nice to see these images move on from the "clueless dad" stereotype, and more to the point of the post, showing dad not just tolerating child-care duties, but even reveling in them as vital to his role in the larger family unit. It would be interesting to see what sorts of shows these commercials are being associated with--I think the Nikon one I mentioned came on during a basketball game...

Trying to learn something of importance to the study of this behavior by watching TV commercials is unlikely to advance the science. I'm not sure why sociologists seem to consider this stuff data but it is too confounded with the need to push specific value props and target competition to be valuable to anyone other than the laziest of couch-potato academics.

Reminds me of the artist's response to the critic's question "What does it mean?" "It means whatever you want it to mean."

So so tired of guys not pulling their weight. And of recognition and accolades that are far in excess of their actual contributions. You see it all the time: some study or other finds some minute increase in men's involvement in childcare (or housework) and the headlines trumpet "Men doing more!" rather than the more accurate "Women still doing most of it".

Why is the Cheerios dad making the v-sign? That wouldn't fly in the UK.

Hello to all! It seems to me that all these advertising stamps are long gone. It no longer works in a world where women decide how they should live. This is very noticeable in the choice in personal life. Marriage is no longer considered the only unit to focus on. Have you heard about how couple looking for female? This is a vivid example of the expansion of views on gender roles in the family.

How to find a girl with similar interests? I have serious plans and I want my fiancee to be at my level.

You know, it seems to me that I'm already ripe for a family. My friends got married a long time ago, but the problem is that I can't find a girl who is ready for marriage. I thought for a long time and decided to follow the advice of friends. I started chatting on this great site. I haven't got 100% result yet, but there are a few girls who suit me.