The Flambeaux: A History of Race, Gender, and Fire on Mardi Gras

New Orleans has been celebrating Mardi Gras since the 1730s, but it took a hundred years before we began to see street processions. The first processions included carriages and maskers on horseback. The first floats appeared in 1856 with the formation of the first Mardi Gras krewe: the Mistick Krewe of Comus.

Enslaved and free men of color lit the spectacles with torches. They were called the flambeaux. Eventually, they became a spectacle in themselves, dancing for tips. In the historical engravings below from the 1850s, you can see men carrying torches among the festivities (Wikimedia Commons and the Library of Congress). 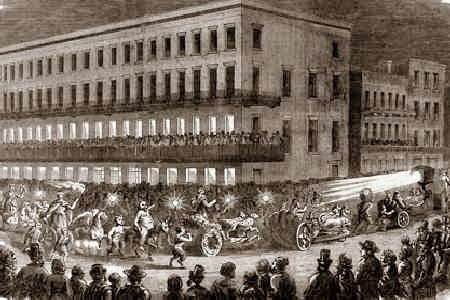 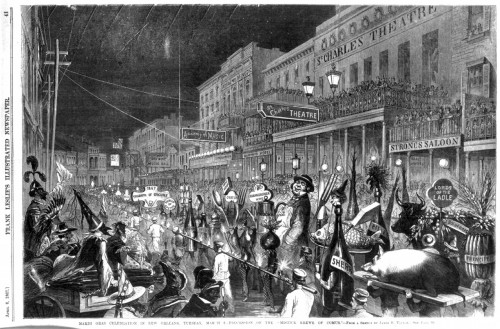 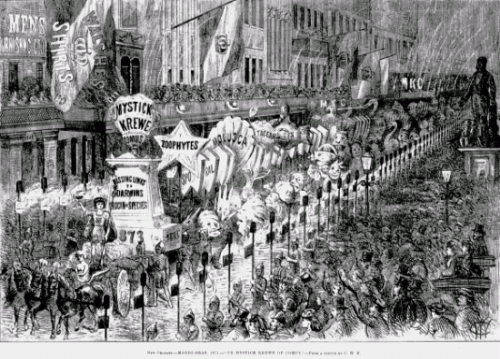 Today, there are still flambeaux carriers and they are still mostly black men. The tradition has been passed down through generations. In a video at nola.com, a flambeaux carrier named Herbert Long explains that he’s been carrying flame for 18 years, following “generations of [his] family.” Today they carry kerosene torches.

Unbelievably, the first white men to carry the flambeaux appeared in a parade in 1969, something I’ll talk about tomorrow. Meanwhile, the first ever all-female flambeaux troupe, the glambeaux, debuted in 2014.

Today, the flambeaux are a beloved part of the Mardi Gras tradition, good and bad.

The image links in the middle set are all messed up; three of them show the same picture when enlarged.

"Enslaved and free men of color lit the spectacles with torches. They were called the [standard French word for "torches"]"

[…] The Krewe of Tucks was started by two white male Loyola students in 1969. They wanted to parade as flambeaux carriers — a nod to the original form of parades in which slaves or free men of color carried flames […]

I admire your tremendous help that is quite updated to all and hope after getting the material on your blog we are able to explore. Thumbs up with dissertation literature review services work from the history truly like to grab the history update please continue sharing more.