The Attribution of Intelligence

The day I defended my dissertation I watched Chaotic, the Britney Spears/Kevin Federline reality show, from beginning to end. True story. The next day I pulled all of the paperback classic novels from my bookshelves and donated them to Goodwill. They were mostly tattered Penguin copies of things like The Sun Also Rises and The Stranger. I was done with them.

I was the first person in my family to get a traditional college degree and those books meant a lot to me for a long time. I was an insecure student; a sufferer of the famous imposter syndrome.  The books were a signal to myself — and perhaps others, too — that I was a Smart, Educated Person with Intelligent Tastes. They were what sociologist Pierre Bourdieu would call cultural capital, objects that indicate my membership in a particular class. Both Chaotic and the purging of the books were part of the same cathartic expression: relief, incredible relief, at having not-failed. I had a new form of cultural capital now, a more powerful version of that message. I had a PhD. I could afford to toss the paperbacks.

Today, as someone who has officially “made it” in academia, I need those books even less than I did on that transitional day. And, as I’ve made the journey from nervous graduate student to tenured professor, I’ve slowly come to understand what an incredible privilege it is to carry the institutional capital that I do.

Every time I have the opportunity to admit I was wrong or confess a lack of knowledge, for example, I can do so without fear that anyone will think that I’m generally stupid or ignorant. Others assume I’m smart and knowledgeable because of the pedigree, whether I am or not. People who aren’t as lucky as I — who have the wrong accent, the wrong teeth, or the wrong clothes, and who don’t have the right degrees, jobs, and colleagues — they are at risk of being labeled as generally stupid or ignorant whenever they make an intellectual misstep, whether they are or not.

To them, that used Penguin copy of The Stranger may be more valuable than the $0.03 it costs on Amazon. In another part of the social strata, it might be worth it to pay $46 for that subscription to The New Yorker. The subscriber may only read the cartoons, but they don’t mind because, after all, that’s not really what they’re paying for. 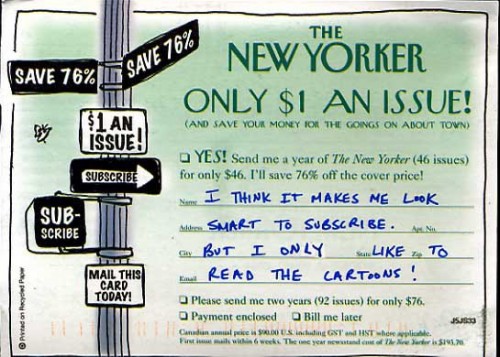 Unless they really, genuinely like to read... The problem with posts like this is that it implies that the only reason a person is buying The Stranger is to win social cache. I'm not saying that it isn't a reason, but it's certainly not the only (or even most common) one. Books are not something that a person outgrows when they stop being insecure about their intellectual status. The problem with assertions like this one is that it presents a genuine love of literature as a kind of social status seeking - and that's insulting.

I only read the cartoons in the New Yorker, too.
As I was completing my PhD I became obsessed with collecting classic works of sociology, which I fully intended to read later today, tomorrow at the latest, to deepen my understanding of the discipline. I never actually got around to reading any of them, but packed them around with my good intentions. But when I landed a tenure track job, I was amazed to discover that the students who came to my office were thoroughly impressed my the sheer mass of volumes and attributed to me a profound intellect and knowledge, in the mistaken assumption that to own is to have read. I quickly learned not to throw out any of the freebies sent me by publishers hoping I would adopt their text in my course, which I seldom did since that would have required reading the text. Having wall to wall, ceiling to floor books won me the reputation as a scholar which my actual publishing record would probably not have. So, there is a lot to be said for image management.
On the other hand, I was often deeply suspicious of colleagues who had nothing on their shelves but books from their field. I quickly realized that while most of my colleagues actually kept up with the reading in their fields, they read virtually nothing else. Although fully acknowledging that they are experts in their fields, they appeared to know, or to be interested in, anything else at all. I fully appreciated that time constraints made it difficult for them to read widely outside their field if they were to keep on top of their discipline, but i could not accept them as true intellectuals if they did not at least WISH they could read more widely. I may have not read all of the books I collected, but at least I have read widely and kept abreast of general trends and themes across a variety of intersecting disciplines.
So, it was fascinating for me to read how, having graduated, Lisa felt safe to discard hoarded copies of literary masterpieces as no longer necessary to bolster her image as an intellectual, because she perceived that her PhD outranked a good library as a credential as an intellectual. For me, the removal of books unrelated to her field would have (wrongly!) identified her to me as someone so narrowly focused as to be more of a technician than a true intellectual. Of course, on closer acquaintance I would have discovered that she had read such classics and undoubtably continues to read broadly (it shows in this column, I think) but one would have to look past the image presented by her bare bookshelves to see that. So fascinating how cultural capital is displayed, and how those displays may be variously interpreted depending on the audience.

It's much cheaper to borrow from a library.

The Attribution of Intelligence - Treat Them Better — February 12, 2015

[…] The Attribution of Intelligence […]

"A 56 year old garbage collector is smarter than a 28 year old triple PhD. A lot smarter in fact, because the triple PhD has spent all his time literally thinking about three things."

Intellectual Consumerism and All The Things I’m Glad I Got Over | Good Morning — March 3, 2015

[…] Images had a great post in early February on the performance of intelligence: not actually being smart one way or the other, but cultivating a lifestyle that makes you […]