The Tomato Tariff: The Politics of Fruits and Vegetables

If it were to happen that the decision as to whether the tomato was a fruit or vegetable made it to the highest court of the land — if such a strange thing were to happen — certainly the botanist’s opinion would weigh heaviest. Right?

In fact, this decision did make it all the way to the Supreme Court. It happened in 1893. The case was brought by a tomato importing family by the last name of Nix. At the time, the law required that taxes be collected on vegetables that were imported, but not fruit.

The lawyers for the Nix family argued that the tomato is a fruit and, therefore, exempt from taxation. They were, of course, correct. Botanists define fruit according to whether it plays a reproductive role. So, any plant product with one or more seeds is a fruit, whereas vegetables don’t have seeds. Fruits are ovaries, for lack of a better term. All other plant products — stems, roots, leaves, and some seeds — are vegetables.

But the Supreme Court said, essentially, “We don’t care” and gave their gavel a good pound. Here’s some of the text of their unanimous opinion:

Botanically speaking, tomatoes are the fruit of a vine… But in the common language of the people, whether sellers or consumers of provisions, all these are vegetables which are grown in kitchen gardens, and which, whether eaten cooked or raw, are… usually served at dinner in, with, or after the soup, fish, or meats which constitute the principal part of the repast, and not, like fruits generally, as dessert.

The judges were referring to the common understanding, which has more to do with how we use the plant products than how plants use them. Your typical chef roughly divides plant products according to whether they’re sweet or savory. Fruits are sweet. Vegetables are savory and used for main courses and sides. It’s all about whether you eat them for dinner or dessert. And that’s what the Supreme Court upheld. 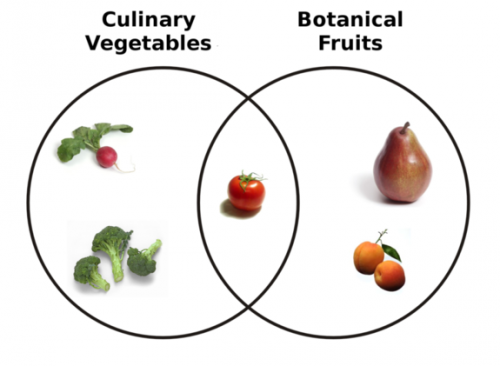 Since the culinary scheme dominates our colloquial understanding, we mis-classify lots of other things, too. Zucchini, bell peppers, eggplants, string beans, cucumbers, avocado, and okra — all fruit. Rhubarb is a vegetable. No seeds. Pineapples are fruits. “Ah ha!” you say, “I’ve never noticed a pineapple having seeds!” That’s because commercial growers sell us seedless pineapples. Who knew. Berries are fruit, but strawberries, blackberries, and raspberries are not actually berries. Isn’t this fun?

If reality means anything, it is that which “resists” the pressure of a force. … That which cannot be changed at will is what counts as real.

We often think of cultural facts as somehow less real than biological ones. For the Nix family, though, biology mattered naught. They still had to pay the damn tax on their tomatoes. Culture is real, folks. Social construction is not just something we do to reality; for all intents and purposes, it is reality.

Who are you trying to convince?

I actually love Louis Vuitt0n 0utlet. Probably not for this context. But it is adorable. Playful and looks good too. Would be cute with jeans or a simple dress.

There is no inherent truth in constructs and classification schemes other than their ability to serve a useful purpose. That plants can fall into two or more useful classes (common usage and biological) is not surprising.

Like the George Box quote: "All models are wrong, but some are useful."

When you assume truth in a construct--social construction theory for example--you necessarily trap yourself and limit your ability to conceive.

I've seen many arguments on this site opposing a gender binary. Does this same argument not apply to fruit? If a tomato is a "fruit" simply because it is an ovary, is a person a "female" simply because she has one?

The social construction of science | Memoirs of a SLACer — February 12, 2015

[…] first was a Sociological Images post discussing the social construction of fruits and vegetables. In short, though things ranging from tomatoes to bell peppers are scientifically classified as […]

The Tomato Tariff: The Politics of Fruits and Vegetables | reflections on food — February 24, 2015

[…] The Tomato Tariff: The Politics of Fruits and Vegetables. […]

The point is only interesting if you mistakenly believe that the fruit/vegetable separation has a biological meaning.

So as long as the law requires something to be EITHER fruit OR vegetable, it's by definition a law dealing with culinary terms or common usage, not a law dealing with biological/botanical functions. And as such the botanical distinction is not relevant.