Elite University Degrees Do Not Protect Black People from Racism

Disentangling the effects of race and class on the social mobility of black Americans is one of sociology’s important jobs. A new study by S. Michael Gaddis is a nice contribution. 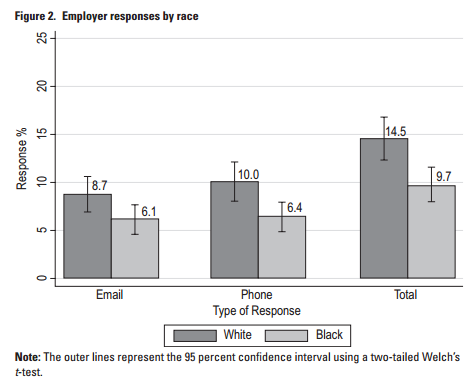 Gaddis goes on to show that when employers did respond to candidates with black-sounding names, it was for less prestigious jobs that pay less.

Comparing applicants who are black and white and have elite vs. more middle-of-the-road university degrees, blacks with elite degrees were only slightly more likely than whites with less impressive degrees to get a call back. As is typically found in studies like these, members of subordinated groups have to outperform the superordinated to see the same benefit.

While these results would have likely been far worse 30-40 years ago, they're still pretty bad and we've got a long way to go. But you've ultimately got a dog-bites-man story with this. We get it.

The sad part is that an unfortunate message to black people gets communicated when this kind of research is presented independently of other findings, i.e., don't bother with education--you won't be accepted anyway. That's a shame because study after study shows that all men and women with college degrees are treated better in the workplace, regardless of race.

The elephant in the corner of most studies on employment--race, nationality, gender, etc.--is education. Nothing else has such a strong effect and highlighting the rest without commenting on education is kinda misleading.

Good. Us honkies are also more likely to pay for our schooling. I have massive student loan debt so I'm hoping I can bank on at least SOME white privilege. haha

Also, is more impressive only gauged as "prestigious"/known name univ.? If so, not. good.

Since I can't review the study because it's behind a paywall, I'm wondering whether this survey takes into account government jobs where, at the federal level at least, blacks are over-represented (and whites are under-represented, believe it or not!)

I also wonder whether it takes into account jobs with companies that have affirmative action/pro-diversity policies - they seem pretty common among Fortune 500 corporations these days.

It seems like a more revealing and useful study would identify what kinds of businesses and what sectors of the economy are practicing employment discrimination the most. It's safe to say that it's not government and probably not large corporations with affirmative action/pro-diversity policies.

See http://papers.ssrn.com/sol3/papers.cfm?abstract_id=2386677 for a recent and free version.

Copy edit: The results indicate that "white-sounding candidates were 1.5 times AS likely" or "50% more likely" to receive a response, not "1.5 times more likely."

Actually it's really sounds very sad. I think that every company should look at proficiency and human skills but not at color of skin or name. When at university I needed to write a coursework about racism in nowadays and it was hard for me to read such information. So I as always buy college research paper and trying to help my friends which have another color of skin,if I can help.

Matched to black and white candidates who are elite via more middle-of-the-road university programs, blacks with elite degrees are slightly more likely than white people with less impressive degrees to get the call back. Find out about ukwritings now. As seen in studies such as these, members of rescue groups have to succeed the authority to see the same benefit.

There are few quick features that you can explore in this platfrom for working. Mobile Phones

Thank you for the beautiful blouse, I can’t wait to wear it this weekend.
sakal ekimi